Bajrang Punia, Deepak Punia and Sakshi Malik were the ones who flew the Tricolour high in the wrestling arena with gold medals 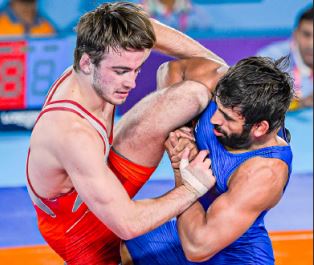 Bajrang Punia during his gold medal match against Canada’s Lachlan McNeil in Birmingham on Friday.
PTI
Our Bureau & PTI   |   Calcutta/Birmingham   |   Published 06.08.22, 04:17 AM

The Indian wrestlers ruled the mat at the Commonwealth Games on Friday as they earned the country six medals, including three gold. Bajrang Punia, Deepak Punia and Sakshi Malik were the ones who flew the Tricolour high in the wrestling arena with gold medals.

Bajrang was a class apart while defending his title before Sakshi produced a sensational fightback to emerge triumphant. Deepak then boosted the medals tally further by winning the men’s freestyle 86kg gold. However, birthday girl Anshu Malik (57kg) had to be content with a silver medal in her maiden CWG appearance. Divya Kakran clinched a bronze in 68kg, winning the play-off in just 26 seconds against Tonga’s Tiger Lily.

Mohit Grewal then ensured that India had a medal to show in all categories on Friday, winning the 125kg bronze play-off to cap a successful day in style. Courtesy the spectacular showing by the wrestlers, India moved to fifth position in the medals tally with a total of 26 medals — 9 gold, 8 silver and 9 bronze medals.

Total dominance Such was Tokyo Olympics bronze medallist Bajrang’s dominance in the 65kg competition that he won three of his four bouts inside first rounds.

The 28-year-old defending champion beat Naurau’s Lowe Bingham and Mauritius’ Jean Guyliane Joris Bandou ‘by fall’ before winning by technical superiority against England’s Geroge Ramm. Canada’s Lachlan Maurice McNeil fought well against Bajrang but the Indian was far superior in technique and stamina as he won the bout 9-2.

The comeback For Sakshi, who has been battling for relevance for long, it was an ideal opportunity to get some confidence back. She didn’t disappoint as she triumphed in the 62kg contest to win her maiden CWG gold. She began by pinning home team wrestler Kelsey Barnes and followed that with a technical superiority win against Cameroon’s Berthe Emilienne.

In the final against Ana Paula Godinez Gonzalez, Sakshi, an Olympic medallist, trailed 0-4 after the Canadian scored on counter-attack.

But Sakshi did not  succumb to the pressure as she turned the scales initiating a right-leg attack to throw theCanadian on the mat. Fromthere, she used her power topin Gonzalez in a sensationalmanner. Indo-Pak clash Deepak was calculative in hisbouts and finished on top ofthe podium without losing asingle point.

He began with technicalsuperiority win over MatthewClay Oxenham from New Zealand and beat Canada’s Alexander Moore 3-1. In the final against Pakistan’s Muhammad Inam, the23-year-old Indian had betterstamina and outlasted Inam3-0. There were no spectacular moves, but Deepak’s powerwas impressive.