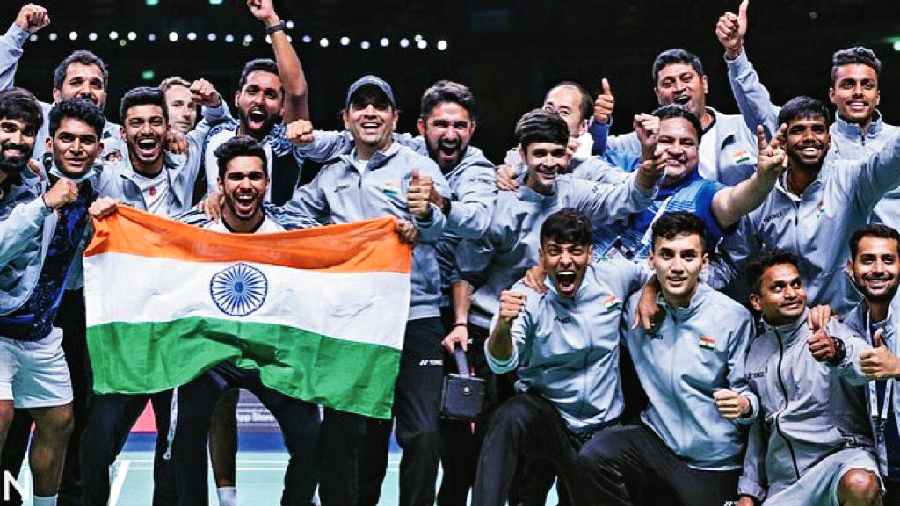 Indian players and support staff after their semi-final victory on Friday.
Twitter
Angshuman Roy   |   Published 15.05.22, 01:18 AM

A win away from what could be one of the most important triumphs in their badminton history, India will hope to come up with yet another strong performance in Bangkok on Sunday.

When the draw was held for the Thomas Cup and Uber Cup on April 1, few had thought that the Indians would be there on the final day of the former, the men’s team championship. But the likes of HS Prannoy, Kidambi Srikanth and doubles specialists Satwiksairaj Rankireddy and Chirag Shetty upset all calculations to set up a summit clash with Indonesia. En route to the final, they scalped champions Malaysia and Denmark in the quarter finals and semi-finals, respectively.

So, here they are, ready to have a brush with history at the Impact Arena.

India’s record hasn’t been good in the biennial tournament. A last-four finish way back in 1979 was their best till the 3-2 win against Denmark on Friday.

“I find it amusing that people are surprised by our performance. I was confident that we could go the distance this time. This team has gelled well and stayed together as a fighting unit. There is a lot of camaraderie between the players and I haven’t seen such a close-knit squad in my coaching career,” former national coach Vimal Kumar, who is with the team, told The Telegraph on Saturday. “The players are self-motivated and in a match like tomorrow’s (Sunday), we will need loads of that,” he added.

It’s about “synergy,” said doubles coach Arun Vishnu. “In a team event, you need A-class performances from everyone. In the past, what I have seen is if the singles players perform well, we fumbled in the doubles or vice-versa. But this time everyone is firing in unison. Even before the tournament started, the mood in the camp was ‘we would prove a point’. And it’s showing in our matches.”

The way the Indian bench celebrated after Prannoy defeated Dane Rasmus Gemke drives home the point Vimal and Vishnu made. The entire team rushed to the court to hug the world No. 23 and then broke into a celebratory jig. “Team spirit,” Vishnu added.

India though would need a lot of guts and gumption against the top-seeded Indonesians, who have won the tournament 14 times. A winning start will be a huge confidence booster and much will depend on world No. 9 Lakshya Sen. The world championship bronze medallist lost his matches against the Malaysian and Danish rivals in the last two ties. On Sunday, he is likely to be up against world No. 5 Anthony Ginting. Sen had defeated Ginting in the German Open a couple of months ago. “Let’s hope he gives a positive start,” Vimal said.

Srikanth is likely to play world No. 8 Jonatan Christie, who is in brilliant form presently; man of the moment Prannoy is expected to face world No. 24 Shesar Hiren Rhustavito.

On Friday, Prannoy injured his ankle but played through pain to take India through. A lot will depend on his recovery. “He should be there,” Vishnu said.

Doubles has always been Indonesia’s forte with three players of the world’s top two pairs — Kevin Sanjaya Sukamuljo, Mohammad Ahsan and Hendra Setiawan — in their ranks in this competition. They also have the world No. 7 combination of Fajar Alfian and Muhammad Rian Ardianto.

“Yes, Indonesia are very strong in doubles, but Chirag and Satwik are no pushovers,” Vimal said. The Indians could be up against the new but formidable pairing of Sukamuljo and Ahsan.

The second doubles match is something India need to look at. Krishna Prasad Garaga and Vishnuvardhan Goud Panjala suffered setbacks against Malaysia and Denmark. That may prompt the Indian think-tank to bring back MR Arjun and Dhruv Kapila. “Arjun and Dhruv have a point to prove and what better platform can be there than the Thomas Cup final,” a source said.

While most of the shuttlers have found it difficult to deal with the conditions at the Impact Arena, Srikanth and Prannoy are making the most of the sideways drift. “They have adapted well to the drift. It will not be easy for the Indonesians,” the duo’s coach Mohammed Siyadath Ullah said, exuding confidence.

India were seeded fifth according to the combined ranking points of their three top singles and two doubles pairs as of February 22, 2022.

This is the first time India will be playing in the final. The last time India made it to the last-four was in 1979.

Lost to Denmark in the quarter finals

The trophy for the Thomas Cup, started in 1948-49, is 71cm high and was made by Atkin Bros of London. The silver-gilt trophy consists of a cup on a plinth, with the figure of a player atop the lid. Its name honours George Thomas, founder-president of the international badminton federation (BWF)

Credit: BWF and Our Bureau