The 24-year-old who played just eight ODIs and four T20Is before Sunday’s Group 1 match, hit five fours and as many sixes in his entertaining unbeaten knock 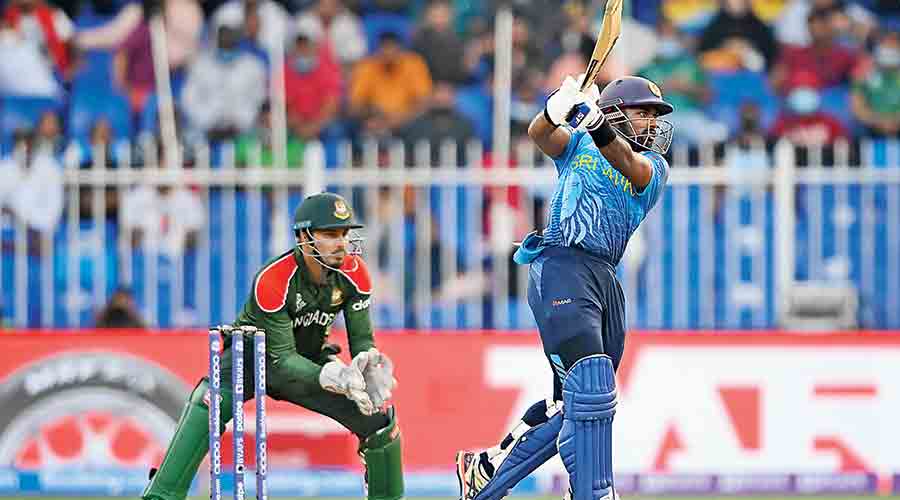 Charith Asalanka of Sri Lanka on way to his unbeaten 80 against Bangladesh at Sharjah Cricket Stadium on Sunday.
Getty Images
Our Bureau, PTI   |   Calcutta, Sharjah   |   Published 25.10.21, 03:58 AM

Sri Lanka continued with their impressive form from the Qualifiers to begin the Super 12 round of the T20 World Cup with a convincing five-wicket win over Bangladesh on Sunday.

Sri Lanka suffered a mid-innings batting collapse but recovered in time to chase down the target of 172 with seven balls to spare, thanks to brilliant half centuries from the left-handed batting duo of Charith Asalanka (80 off 49 balls) and Bhanuka Rajapaksa (53 off 31 balls).

They stitched together a partnership of 86 runs in for the fifth wicket in just 8.4 overs.

The 24-year-old Asalanka, who played just eight ODIs and four T20Is before Sunday’s Group 1 match, held the Sri Lanka innings together, hitting five fours and as many sixes in his entertaining unbeaten knock.

Coming to the crease in the 10th over, the 30-year-old Rajapaksa smashed three fours and as many sixes in his innings.

Bangladesh would certainly be disappointed with the result. Poor fielding cost them dear as Litton Das dropped regulation catches of both Rajapaksa and Asalanka.

Bangladesh, who too had to go through the Qualifiers like Sri Lanka, had begun their defence well as they got a breakthrough with the fourth delivery of the innings.

But Sri Lanka overcame the early setback with Asalanka taking charge. At the end of the Powerplay overs, the islanders had reached a handsome score of 54/1 to be well on course of their chase.

But Shakib-al Hasan triggered a mini batting collapse with two wickets — that of Pathum Nissanka (24) and Avishka Fernando (0) — in four balls. Mohammad Saifuddin then dismissed Wanindu Hasaranga (6) as Sri Lanka lost three wickets in 10 balls for the addition of 9 runs.

Sri Lanka were 80/4 at the halfway mark and set-batter Asalanka, who reached to his fifty off 32 balls, kept them in the hunt.

Earlier, opener Mohammad Naim (62) and Mushfiqur Rahim (57 not out) cracked half centuries to steer Bangladesh to a competitive 171/4. Naim and Rahim stitched a quick 73-run stand in 8.3 overs to help Bangladesh build some momentum.