The squad picked earlier had only Jasprit Bumrah, Mohammed Shami and Bhuvneshwar Kumar as the fast-bowling options 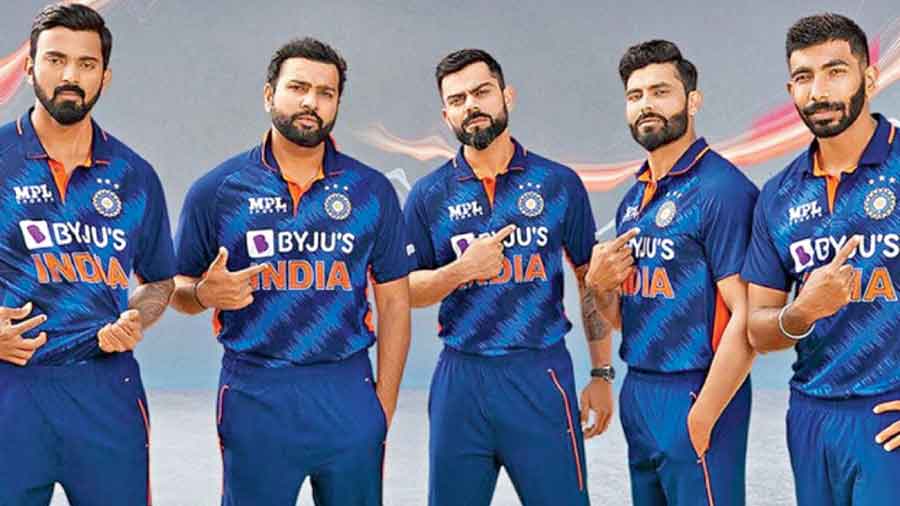 (From left) KL Rahul, Rohit Sharma, Virat Kohli, Ravindra Jadeja and Jasprit Bumrah sport India’s T20 World Cup jersey which was unveiled by the BCCI on Wednesday. The patterns on the new jersey are inspired by the billion cheers of fans, the BCCI tweeted, and is therefore called the ‘Billion Cheers Jersey’.
Sourced by Correspondent
Our Bureau   |   Calcutta   |   Published 13.10.21, 11:59 PM

India have finally added another fast-bowler to their squad for the T20 World Cup as it was announced on Wednesday that Shardul Thakur will be replacing Axar Patel in XV.

The squad picked earlier had only Jasprit Bumrah, Mohammed Shami and Bhuvneshwar Kumar as the fast-bowling options. And as it is still unsure when all-rounder Hardik Pandya will resume bowling, he didn’t in the UAE phase of the IPL, India’s pace unit looked well short on manpower.

Shardul, a seam-bowling all-rounder, is more of a cover for Pandya. He has had an impressive last few months on the field and has snared 18 wickets in the ongoing IPL for Chennai Super Kings with still a match to go.

“The All-India Senior Selection Committee after a discussion with the team management has added Shardul Thakur to the main squad. All-rounder Axar Patel, who was part of the 15-member squad will now be on the list of stand-by players,” BCCI secretary Jay Shah said in a statement.

The ICC had set October 15 as deadline for the teams to make final changes in their squad.

One assumes that the decision to axe left-arm spinner Axar wasn’t a difficult one with the Indian squad already packed with spinners. Ravichandran Ashwin, Ravindra Jadeja, Varun Chakravarthy and Rahul Chahar are still there to give outgoing T20I captain Virat Kohli enough spin options during the T20 World Cup, which will be held in the UAE and Oman from October 17. And Jadeja is anyway the preferred left-arm spinner at the moment.

The BCCI also released the list of net bowlers for India at the T20 World Cup.

While Iyer is an all-rounder, his rise to prominence has been as an opener for the Kolkata Knight Riders. One wonders if Iyer, who bowls medium pace, has been included solely as a net bowler or more as an unofficial stand-by batsman/opener, who could be drafted into the main squad if the situation demands so.

Yuzvendra Chahal, however, continues to be out of favour.