Advertisement
Home / Sports / Sportpersons to watch out for in 2020

Sportpersons to watch out for in 2020

The new decade begins with a lot of youngsters in the sporting world ready to make a mark; The Telegraph takes a look 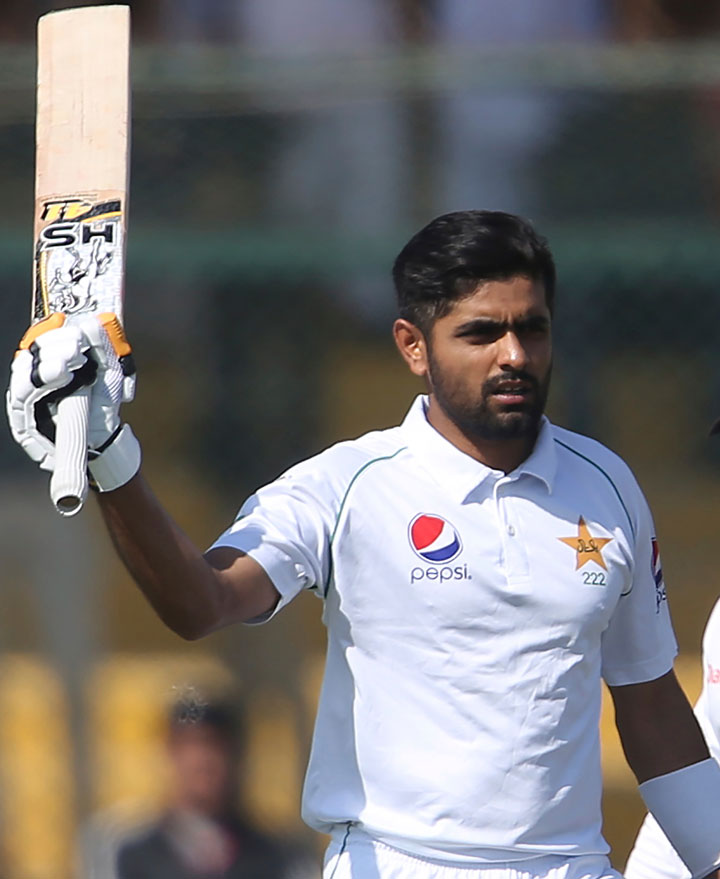 Babar Azam
(AP)
The Telegraph   |   Published 31.12.19, 09:36 PM
Babar Azam, ever since his international debut in May 2015, had been tipped as a megastar in the making. Going into his fifth year in international cricket, he has already established himself as one of the batsmen to watch out for across all formats along with being Pakistan’s go-to man. He finished the year in a regal manner, hitting three hundreds and two half-centuries in his last seven Test innings, remaining unbeaten in two of his centuries in the home series versus Sri Lanka that Pakistan won 1-0. The year hasn’t been too good for Pakistan cricket even though Pakistan managed to host a couple of Test matches at home after a decade, with Sri Lanka being the touring party. Even among the ruins of a disappointing tour of Australia, Azam still managed to shine, trying his best to put up a fight for his team. The recent numbers should not just boost his confidence further, but also help him grow in stature as they jolly well keep him poised for greater success. All Azam needs is a little bit of support from his team-mates, especially the other batsmen. On quite a few occasions, he has had to pay a price for the batsmen’s inconsistencies, seeing his efforts go in vain.

People talk about Charles Leclerc as the future for Ferrari. But the fact is, Leclerc very much looks to be the future of Formula One itself. The talented 22-year-old has a new contract with Ferrari that runs through until 2024. Leclerc was the master of qualifying in 2019. His tally of seven pole positions was the most by any driver during the season. Can he end Lewis Hamilton’s dominance this year? Let’s see.

Some are already calling him the ‘new Messi’. Not for nothing though. With his goal against Inter Milan, he became the youngest player to open his Champions League account at just 17. Ansu Fati is probably the most gifted young footballer of his generation. He was born in Guinea-Bissau but moved to Marinaleda, 100km east of Seville with his family at the age of six. He first joined Sevilla but when he was 10, he moved to Barcelona’s La Masia academy. Rated highly by his club, Ansu made his first-team debut in August at the age of 16 years and 298 days, the youngest in the post-war era for Barcelona. And soon Ansu also became the youngest player ever to score for Barcelona and the third youngest in La Liga history when he came on as a substitute at Osasuna and scored after just six minutes. Ansu seems to have got all the qualities that can take him to the top. Nimble-footed, a good finisher and possessing an excellent vision, sky is the limit for young Ansu. Top flight football is taxing, both mentally and physically. Staying fit will also be a challenge. But Ansu would not have to look far for inspiration to scale all such obstacles. After all, the ‘new Messi’ has the original one as his team-mate.

The first impression of Shimron Hetmyer, when he first arrived on the international scene, was that he's someone who tries to clear the boundary off each and every ball. But the recent T20I and ODI series versus India reflected the change the left-handed batsman is trying to bring about in his game. Not to say that he has tweaked his approach totally, but he now focuses on settling down first instead of trying to hit the ball out of the park from ball one. He's also paying attention to taking ones and twos to keep the scoreboard ticking. He’s aiming big, not just the big hits.

Like Ansu Fati, Greenwood too has been pushed into the limelight pretty early in his career. Touted as ‘mini Robin van Persie’, Greenwood is a player who is comfortable shooting with either foot. Having already scored quite a few times, Greenwood has also earned Manchester United manager Ole Gunnar Solskjaer’s trust. But stardom has its own weight and the 18-year-old will have to bear it. Solskjaer has already likened Greenwood to Cristiano Ronaldo. “There are not too many I can remember like him who has every single technique. He’s not just 50-50 with both feet but probably 60-60!” Solskjaer has said of Greenwood.

The stranglehold of Rafael Nadal, Novak Djokovic and Roger Federer over world tennis isn’t over but has weakened somewhat definitely. And Greek star Stefanos Tsitsipas may just be the one to watch out for. The 21-year-old concluded his 2019 season with a bang, lifting the ATP Finals crown. One of just two players to beat each member of the ‘Big Three’ in 2019, Tsitsipas, it seems, has found the road to the top.

The suspension for doping violation kept Prithvi Shaw out for some time, but he struck almost immediately on his return with a compact 66, and even better and solid 202 in Mumbai's Ranji Trophy opener versus Baroda. Prior to that, Shaw also performed in the Syed Mushtaq Ali T20 Trophy with three half-centuries.These performances speak of Shaw’s talent. But the young batsman must work on his temperament, both on and off the field. He knows how to score runs, but has to ensure that off-field distractions don’t ruin his on-field exploits.

How promising is Scottie Scheffler? Here’s a fact — At the start of 2019’s calendar year, he was ranked outside of the world’s top 1,500 players, but following two wins on the Korn Ferry Tour and making cuts week in, week out, Scottie has made his way into the top 100. Scottie has a tight game and there are not too many weaknesses. If he betters his accuracy, the sky is the limit for this American golfer.

The 19-year-old is one of the most talked about young footballers. In September, he became the first player to score a hat-trick during the first half of a Champions League game as his side Red Bull Salzburg thumped Genk 6-2. That Haland is improving at a fierce rate, almost with every game, makes him one of the most exciting players in world football. The in-demand striker has joined German side Borussia Dortmund even though giants like Manchester United and Real Madrid were interested in signing the Norweigian.

When Marnus Labuschagne came on as a concussion substitute in the Ashes Test earlier this year at Lord's, he had a massive task ahead as he replaced a player of Steve Smith's stature. But Labuschagne delivered with a crucial half-century and later in the year smashed three centuries in back-to-back Tests, proving he's an ideal and much-needed addition to Australia's Test batting line-up. Labuschagne has also shown that the Australian batting line-up is not just about Smith and David Warner. That’s quite an achievement.

Quick, strong and has great spatial awareness — Lautaro Martinez is just how a forward should be. Under the guidance of Antonio Conte, Inter Milan are looking to re-establish themselves and Lautaro is a vital cog in those plans. He has transformed himself from a bit-part player for Argentina in their Copa America campaign earlier this year to an extremely effective poacher in front of the goal. This year, Lautaro has made 13 appearances across all competitions for Argentina, during which he has scored eight goals, including his first international hat-trick, and given one assist.

With 2020 being the Olympics year, watch out for this American swimmer, who loves setting records. And guess who is helping Dressel prepare for the Tokyo Games? It’s Michael Phelps! Phelps said that Dressel will need to be “perfect” if he wants to win eight gold medals at the 2020 Olympics. Dressel is on the right path it seems. He already holds the world record in the 50m freestyle event.

It’s always tough for a 16-year-old to handle the pressure and find recourse when thrust into international cricket all of a sudden. Naseem Shah too had an immensely difficult job. His mother’s death made things tougher for him.. The teenager wasn’t too impressive in his debut Test against Australia in Brisbane. But against Sri Lanka in Karachi, he showed the world what he is capable of, with his 5/31 earning Pakistan a comprehensive win. And that was only his third Test. Selected in the Pakistan U-19 squad for next month’s U-19 World Cup, Naseem should go into the tournament with gumption since he already has the experience at the senior level. Plus, there’s something between Pakistanis and fast-bowling. It just clicks!

Real Madrid’s wonder kid has made all the right noises. When he was expected to play with Castilla, Rodrygo has shone with the club’s senior team. Amazing skills complemented with mature decision-making was what brought him to Madrid from Santos. The Brazilian, who will turn 19 this month, revealed he started shaking when he first met Los Blancos manager Zinedine Zidane. But he has overcome all shakiness and is gradually turning into a fine player. His hat-trick against Galatasaray in the Champions League speaks volumes about his potential. An all-round player whose rivalry with Barcelona’s Ansu Fati may make headlines in the coming years.

Noah Lyles has all that it takes to be the next star of the track. Actually, he is already a star having been crowned world champion in Doha in 200m. Lyles in fact walked away with two gold medals from the World Athletics — 200m and 4x100m relay for the US. On way to his victory in the 200m, Lyles beat the highly experienced Andre De Grasse from Canada and Ecuador’s Alex Quinonez. Lyles dreams of doing the 100m-200m double someday. But first, it’s Mission Tokyo for the 22-year-old.