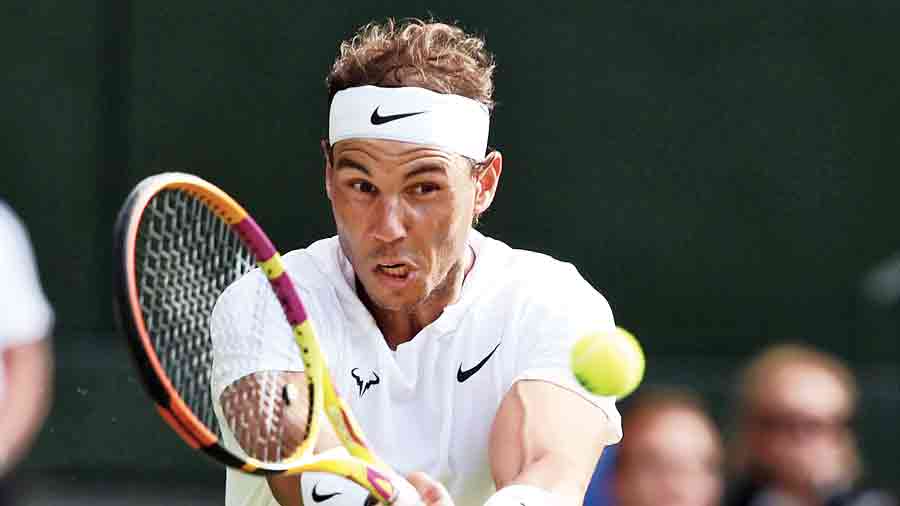 Rafael Nadal made a stuttering but rousing return to the grass on Tuesday, beating 41st-ranked Francisco Cerundolo 6-4, 6-3, 3-6, 6-4 in Wimbledon’s first round to begin his campaign for a third grand slam title of the year. The 36-year-old second seed, who has not played at Wimbledon since 2019 and stayed away from warm-up tournaments with a chronic foot problem, looked to be motoring through the match until a series of unforced errors allowed Cerundolo, 23, back in.

The Argentine upped the tempo and used his booming forehand to overpower twice Wimbledon champion Nadal, who has won 20 other grand slam titles, taking the third set and breaking serve in the fourth.

But Nadal, who won the Australian Open in January and the French Open earlier this month, regrouped and used all his experience to fight back, breaking a now nervy opponent twice to seal the match to the delight of a packed Centre Court.

World No. 1 Iga Swiatek recovered from a dip in her level in the second set to see off Croatian qualifier Jana Fett 6-0, 6-3 in the first round and extend her winning run to 36 matches.

The 2018 junior champion, who exited the grasscourt grand slam in the fourth round last year, had the honour of opening the second day’s play on Centre Court in the absence of the retired Ashleigh Barty who won the 2021 title.

Playing her first match since winning a second French Open title this month, Poland’s Swiatek powered through the opening set without losing a game — registering a 6-0 set for the 17th time this year — despite a stiff breeze swirling through the main show court.

A litany of unforced errors, including a double fault, however, led to Swiatek dropping serve at the start of the second set, allowing the 25-year-old Fett, ranked 252nd in the world, to get on the scoreboard.

Swiatek, who played with a ribbon in Ukrainian colours pinned to her cap as she did during her Roland Garros campaign, broke back immediately — only to hand back the advantage in her next service game.

The Pole’s struggles with her delivery continued as she had to save five break points to hold serve for the first time in the second set to get to 2-3 and stay in touch with Fett.

The hold seemed to spur on Swiatek and she won five games in a row to become the first women’s player in the 21st century to win 36 consecutive matches.

Coco Gauff got off to a bumpy start and converted only four of 25 break points but those glitches were not enough to throw her off course as she reached the second round with a 2-6, 6-3, 7-5 win over Romanian Elena-Gabriela Ruse.

The 18-year-old American is the youngest player in the singles draw and after her runner-up finish at the French Open this month, many are tipping her to go all the way at the All England Club.

However, when she lost the opening seven points against the little-known Romanian, including surrendering her serve to love, her father and coach Corey could be seen frowning on a sun-soaked Court Two. When 11th seed Gauff went on to earn and lose four break points in Ruse’s opening service game, it set the tone for a frustrating afternoon for her family.

The popular teenager finally got a foothold when she broke for a 4-2 lead in the second set before levelling at one set all. Ruse fought back from 3-1 down in the final set to level at 3-3 but Gauff hung on and secured victory when her opponent whipped a forehand wide on match point.

Former world No.1 Simona Halep returned to Wimbledon for the first time since winning the 2019 title and picked up where she left off with a 6-3, 6-2 win over dangerous Czech Karolina Muchova.

Feisty Australian Nick Kyrgios came through a five-set first-round thriller against British wild card Paul Jubb as his fearsome serve eventually overpowered the 22-year-old 3-6, 6-1, 7-5, 6-7 (3), 7-5. Kyrgios is always a crowd-puller but his usual antics did not receive their usual appreciation here this year with a home hope in the shape of 219th-ranked Jubb, who had never won a Tour-level match, on the other side of the net.

Matteo Berrettini, last year’s runner-up at Wimbledon, dropped out of the grass-court grand slam hours before he was scheduled to play his first-round match on Tuesday, saying he had tested positive for Covid-19.