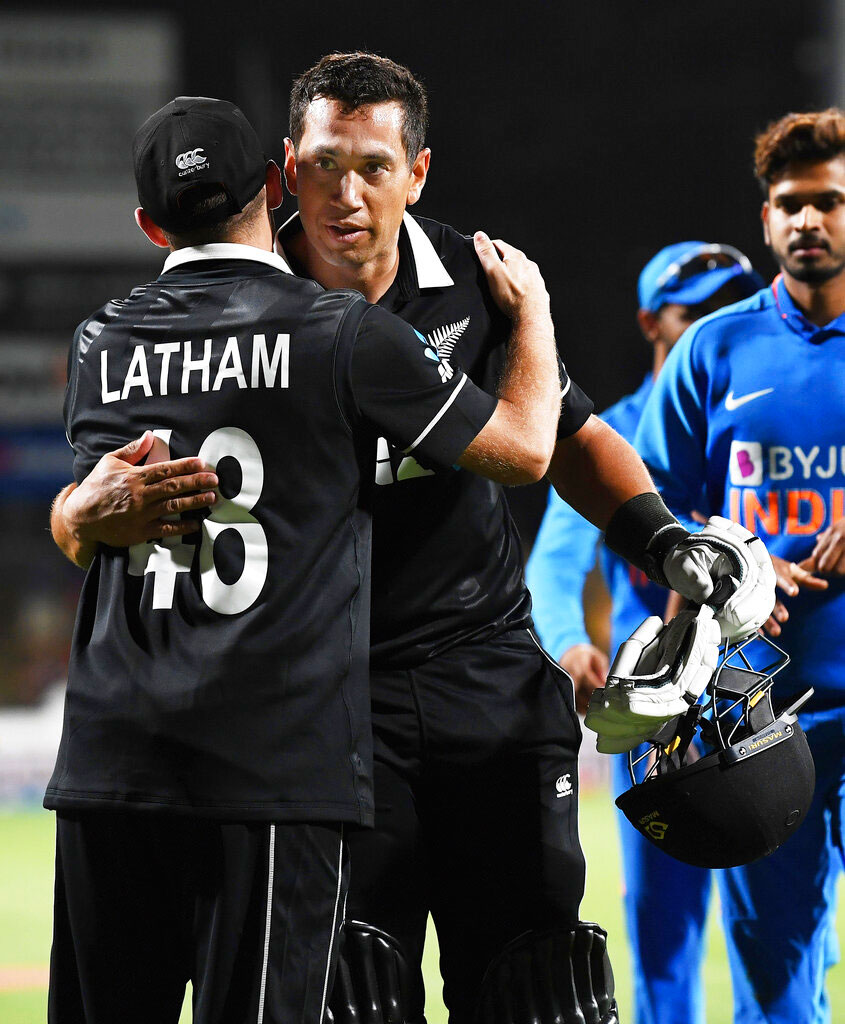 Ross Taylor hugs his captain Tom Latham at the end of the One Day cricket international between India and New Zealand at Seddon Oval in Hamilton on Wednesday
(AP)
TT Bureau & Agencies   |   Calcutta   |   Published 05.02.20, 09:03 PM

New Zealand showed on Wednesday that they are a different side when it comes to the 50-over format. Having suffered the ignominy of a 5-0 rout at the hands of India in the T20I series, the Kiwis displayed that they have the ability and firepower to bounce back.

Ross Taylor hit his 21st ODI hundred — 109 not out off 84 balls — while Henry Nicholls and Tom Latham smashed aggressive half-centuries as New Zealand chased down 348 against India to take a 1-0 lead in the first of the three-match ODI series in Hamilton on Wednesday.

This was New Zealand’s highest successful run chase in ODIs. In 2007, they had gunned down 347 against Australia, also in Hamilton.

Taylor first stitched a partnership with Nicholls adding 62 for the third wicket before Virat Kohli’s stunning direct hit caught the opener short of the crease for 78. Then came the Tom Latham storm.

Standing in for Kane Williamson as captain for the first two ODIs, Latham exploded once he got his eye in. The two men threatened to take the game away from India as they clobbered 117 runs to bring the asking rate down to manageable limits.

This is the third time in a row that India have lost the first match of a bilateral ODI series. Kohli’s men though had bounced back to win the series against West Indies and Australia.

Much like Taylor, India’s No. 4, Shreyas Iyer, too scored a century, his maiden hundred — 103 off 107 balls. Credit should also go to KL Rahul for a superb 88 not out off 64 balls that provided the momentum to the innings.

Taylor said their ODI side can deal with pressure situations a lot better than the T20 side and that precisely is the reason they could knock down a big target in the series-opener.

“It’s always nice to win after a clean sweep in the T20. Obviously new personnel came in and the loss was not a hang-up for them. I am sure it must have played on their minds a little bit, you are human, and towards the end we lost a couple of wickets,” Taylor said after the four-wicket victory.

“But at the same time, the last game was our World Cup final and a lot of the guys have played in pressure situations. They are a lot more experienced than the T20 side. So that showed, but it is only one game and lots to go in this series. It is nice to get that monkey off the back,” he said.

Taylor said the dimensions of the ground helped out, but the New Zealand batsmen all contributed to the successful chase.

“That’s the tough thing about playing on some of these grounds in New Zealand, not knowing what a par total is at any time. Whether at the MCG, or here or anywhere else, you always give yourself a chance. At the same time if you lose two early wickets it was going to be a tough chase.

“I think there were some great contributions throughout the whole order. Even the bowling line-up did well as India looked like they could get 360-370 at one stage. So we just managed to keep it under 350 and it was a psychological mark I guess. The team has to bat well to get that and we did that today,” he said.

The start though wasn’t encouraging for the home team as their opening bowlers Tim Southee and Hamish Bennett conceded 162 runs between them in their 20 overs.

But Taylor was happy with the batsmen’s showing.

“I had a lot of help out there. Henry and (Martin) Guptill the way they started, Tom Latham coming at five and starting that way wasn’t easy. What made that chase easier for us was the left-right combination. We knew there was one short boundary and we could use that to our advantage,” he added.

Taylor and Latham set a hectic pace, taking advantage of India’s lack of penetration in the middle overs. The duo attacked and put pressure on the fielding as well as the bowling, and the run-rate climbed.

Taylor said he was determined to finish the game after the tie here during the T20I.

“It’s not about going there and smacking every single ball but playing good shots. Trying to have those big overs every now and then, soaking up when they did bowl well. They put us under a lot of pressure and obviously when you have a world-class line up like Bumrah and Kuldeep, you respect that and take into consideration when attacking different bowlers. Some days it comes off, like today, and some days it doesn’t,” he said.

“Today Shami bowled exactly the same ball and I inside edged down to fine leg or the keeper. Small margins, it could have been two different results but that is cricket. I guess that’s why we love the game. Just little things — it went our way today and didn’t in the T20s,” he said.