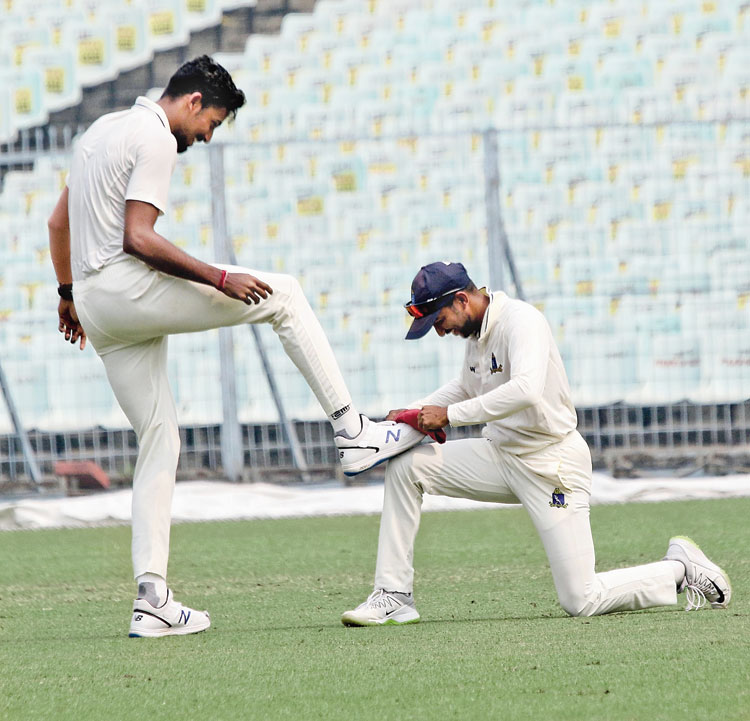 Amid all the celebrations after their thumping win over Karnataka in the Ranji Trophy semi-final clash at Eden Gardens, Bengal players got a congratulatory message from Mohammed Shami in New Zealand.

India were thrashed in the two-Test series by the Black Caps, yet Shami didn’t forget to wish his Bengal teammates for their superb win and the upcoming final.

It was during early afternoon when Bengal’s manager — cricket operations, Joydeep Mukherjee, got a WhatsApp call from Christchurch. “Shami wanted to congratulate the players on the success.

“He was really impressed with how Anustup (Majumdar) played and also wished Ishan (Porel) and the other players. ‘Well played Anustup, very well done Ishan’. These were his messages,” a team source said.

Porel too responded, saying: “Thanks Shamibhai. We’ll do our best in the final.”

Porel’s new-ball partner Mukesh Kumar will be speaking to Shami for his tips before stepping on to the field for the all-important final. Mukesh will also seek Shami’s inputs on how to plot Cheteshwar Pujara’s dismissal in case the India Test No. 3 batsman plays if Saurashtra reach the final.

“I came to know that he (Shami) congratulated us after our victory. He also tweeted and posted on Instagram about all of us. That feels really good. Shamibhai and I keep talking on WhatsApp. I’ll be talking to him before the final too, especially on how to get Pujara out if Saurashtra are our opponents in the final. They will most likely bring Pujara in if they make the final,” Mukesh said.

Bengal have Wriddhiman Saha back in the squad for the final, but they aren’t quite expecting Shami to be included as the pacer is likely to be a part of India’s three-match home ODI series versus South Africa.

“In case he is not included for the ODIs, we’ll then assess the situation. We’ll try and see if he can be a part of our squad,” a member of the support staff said.

Saha, who was a part of the India Test squad but not included in the XI in any of the two Tests, is likely to be included in place of Sreevats Goswami, who bagged a pair in the semi-final.

Saha last played for Bengal in the 2017-18 Ranji Trophy season, where he averaged 38.33 from four matches. The selectors also named uncapped batsman Sudip Gharami, with the injured Koushik Ghosh and youngster Gulam Mustafa being the two omissions from the 16-member squad, which beat Karnataka in the semi-final.

It won’t be too surprising if Gharami is given a debut in the final in place of opener Abhishek Raman, who has been struggling on a continuous basis. There is also a chance that Saha may come in place of Raman, being the lone change in the XI.