As soon as news reached that Lovlina was assured of an Olympic medal, the village and its vicinity erupted in joy 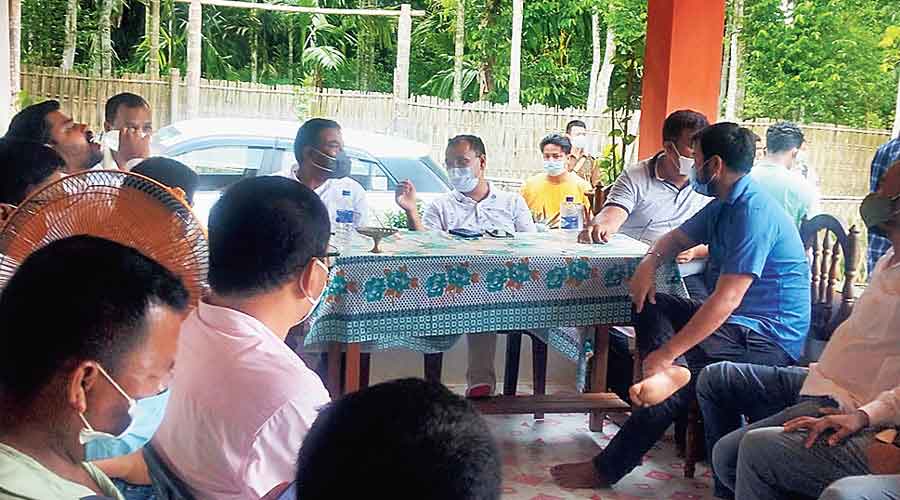 Assam is not settling for anything less than gold, at least not Baramukhia, the village of Indian boxing’s emerging poster girl Lovlina Borgohain.

As soon as news reached that Lovlina was assured of an Olympic medal, the village and its vicinity erupted in joy.

Her feat has also assured Assam of her first-ever Olympic medal.

Horen Gogoi, neighbour and family friend, told The Telegraph from Lovlina’s residence that her “unparalleled” achievement was greeted with beats of the dhol, bursting of firecrackers and distribution of sweets in her village and home town Barpathar.

However, they have not given up on the gold, it is their collective desire as that of the state. “We wanted her to win a medal. She has achieved. She is assured of at least a bronze but we want her to go for gold. Our slogan was ‘Go for glory’ but today it has changed to ‘Go For Gold’. We are very happy for her ... we are praying for her,” Gogoi said.

Chief minister Himanta Biswa Sarma, in his first reaction, echoed Gogoi. “We are very happy but instead of celebrations I want everyone to pray that she wins the gold. Then we can all celebrate,” Sarma said.

For the people of her village and in Upper Assam’s Golaghat district, around 315km from Guwahati, the medal was a just reward for years of hard work and focus.

The Borgohain household has been busy since morning. Its kitchen has been functioning non-stop, serving tea to well-wishers.

Gogoi, a 51-year-old businessman, said the road to Lovlina’s house, 3km from Barpathar town, was in a dilapidated state but the administration started paying attention after the athlete started doing well internationally. She has two World Championships and two Asian Championships bronze medals.

Work on a new 16-km road started this month under the initiative of Biswajit Phukan, the MLA from Sarupathar, under which her village falls. Hours after her medal feat, he announced that a new stadium will come up 3km away.

There was a time Lovlina and her elder sisters, who used to pursue Muay Thai

and are now employed with the BSF and CISF, carried their bicycles for about 1.5km during the rainy season to reach their training ground, Gogoi said.

“The new road, the new stadium are some of the benefits of Lovlina’s exploits till now. Our lives have become a bit easy and the many talents in the area in games like boxing, archery and football will get a place to hone their skills,” Gogoi said.

The village of around 3,000 people is planning a grand reception when Lovlina arrives from Tokyo — her first visit home in nine months.

Her parents — Tiken and Mamoni Borgohain — did not watch her bouts as always because they can’t “absorb the tension and excitement”.

Lovlina had called her father before the bout in the morning and once after her victory and spoke to her mother, who underwent a kidney transplant in Calcutta four months ago.

Subhash Basumatary, former Sports Authority of India official who had planned and executed a talent scouting plan that had unearthed Lovlina in 2012, said: “It is a big feat but I still feel she can win the gold if she continues to spar as she did today,” he said.