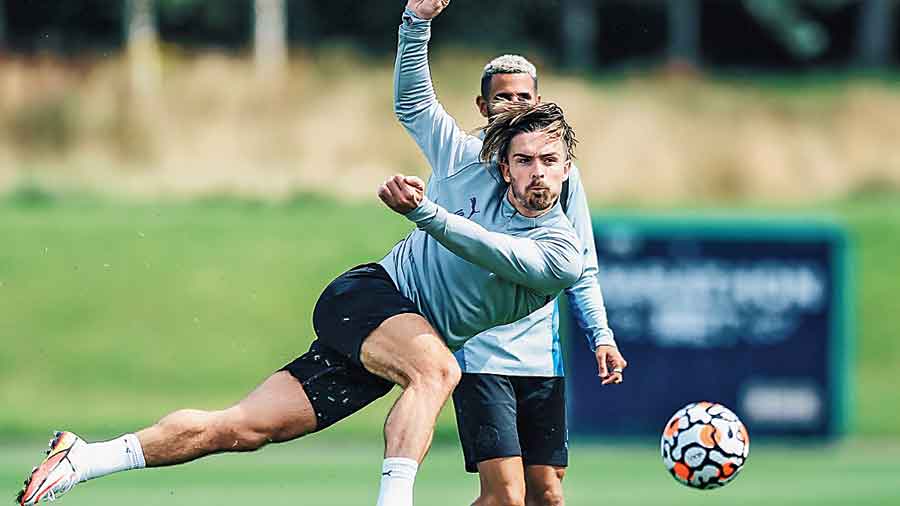 Defender Raphael Varane’s move to Manchester United from Real Madrid is “not 100 per cent done” and the Frenchman will not be available for the opening league game against Leeds United, manager Ole Gunnar Solskjaer told reporters on Friday.

The France international was expected to be unveiled as a United player this week after a deal in principle was agreed between the two clubs last month.

“He hasn’t trained with us... things take time. Not 100 per cent yet. He won’t be involved because he has not trained with us,” said Solskjaer.However, winger Jadon Sancho, signed from Borussia Dortmund, will be involved at Old Trafford on Saturday.

“We’ve had a good pre-season, the last couple of weeks have been really good with everyone back in. Even though we’re still missing a few players through injury and through Covid, we’re still feeling confident ahead of the game,” said Solskjaer.

Striker Edinson Cavani, along with centre back Eric Bailly and winger Amad Diallo, are still isolating and will be absent from the squad against Leeds.

Asked about United’s title hopes this season after finishing second last term, Solskjaer said that there is nothing beyond his group of players.

“We’ve gradually closed the gap and it would need a very good season, a decision with some margins and luck... you want to come to April and May and be in and around it.”

The Norwegian added that he is relaxed over the contract situation of midfielder Paul Pogba, who has been linked with Paris St Germain.

“He is a Man United player, one year left on contract. It’s been spoken and written about so often, every discussion I’ve had with Paul is a positive one... it’ll always be like this with Paul, he’s a media magnet,” he said. Solskjaer has been given more time and money than any of Sir Alex Ferguson’s successors and if he cannot sustain a serious title charge, he will face renewed questions about his suitability to coach England’s biggest and most successful club.

“Last season was more than acceptable in terms of on the journey but this year they’ve got to get nearer,” said former United captain Gary Neville, who called Varane “the last piece in the jigsaw”.

Juergen Klopp defended Liverpool’s limited spending in the transfer market and said he was not surprised to see Premier League rivals Manchester City, Chelsea and Manchester United splashing out.

“We all know the situation of Chelsea, of City and PSG for example,” said the manager, referring to Lionel Messi’s new employers in Paris. “What United is doing I don’t know exactly how they do it.

“We have obviously our way to do it. And that was always the same since I am in. We are allowed to spend the money we earn. That’s what we always did,” he told reporters ahead of Liverpool’s season-opening game at promoted Norwich City.

“I am never surprised about the financial power of Chelsea or City or United. I am long enough in the country to know that they always find a solution to do these kind of things. For us, it’s our way. We keep the team together.”

Centre back Virgil van Dijk has signed a new long-term deal, with the Netherlands international set to be at Anfield until 2025. Van Dijk recently returned to action during pre-season after spending nine months on the sidelines with an anterior cruciate ligament (ACL) injury sustained in the Merseyside derby in October.

Chelsea’s new striker Romelu Lukaku has all the attributes to greatly improve the London club’s attack and bridge the gap to their fellow Premier League title contenders, manager Thomas Tuchel said on Friday.

The lethal Belgian completed a £97.5 million ($134.6 million) return to Chelsea on Thursday after two years at Inter Milan where he helped the Italian club to their first Serie A title in 11 years last season.

“We’re very happy to have Romelu back. In terms of personality, speed, power, he can hopefully be an excellent addition,” Tuchel told reporters ahead of Saturday’s opener against Crystal Palace.

Tuchel said Morocco international Hakim Ziyech was out of the clash at Stamford Bridge.