The defending champions first restricted last year’s runners-up to 114/9 in 20 overs and then rushed to the target in just 12.2 overs without losing a single wicket 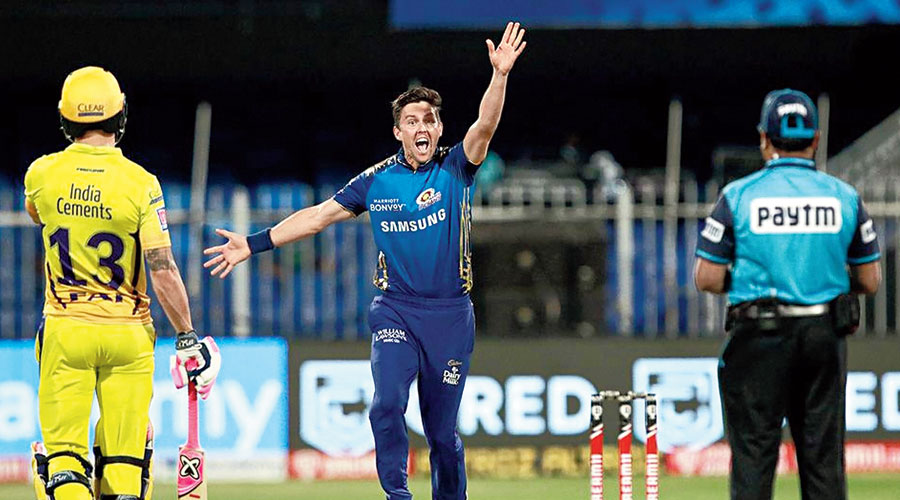 Man of the Match Trent Boult during Mumbai Indians’ game against Chennai Super Kings in Sharjah on Friday.
PTI
Our Bureau, Agencies   |   Calcutta, Sharjah   |   Published 24.10.20, 02:28 AM

Chennai Super Kings, lowest in the IPL standings, hit a new low on Friday when for the first time in the tournament’s 13-year history they were beaten by 10 wickets.

It would be no exaggeration to say that Mumbai Indians toyed with Mahendra Singh Dhoni’s Super Kings. The defending champions first restricted last year’s runners-up to 114/9 in 20 overs and then rushed to the target in just 12.2 overs without losing a single wicket.

Quinton de Kock remained unbeaten on 46, while young Ishan Kishan, opening the innings in place of Rohit Sharma who sat out the match with a hamstring strain, smashed 68 not out off 37 balls to give Mumbai Indians their seventh win of the tournament and take them to the top of the standings on the basis of net run rate. The top three — Mumbai Indians, Delhi Capitals and Royal Challengers Bangalore — all have 14 points each.

Dhoni, after the thrashing, admitted “it does hurt” that they lie last in the points table. With the season almost over for them, “Captain Cool” indicated they are now thinking of the future, trying “to have a clear picture of next year”.

“The coming three games will be an ideal opportunity to give platforms (to the reserve players),” Dhoni said.

Coming back to the match, Trent Boult and Jasprit Burmah produced devastating pace-bowling spells in tandem to destroy Super Kings.

Put in to bat, Dhoni’s team were five wickets down inside the Powerplay overs with Boult and Bumrah taking three and two wickets respectively. They never recovered after that. It was only because of all-rounder Sam Curran’s 52 off 47 balls that they managed to cross the hundred mark.

Curran’s 43-run stand for the ninth wicket with Imran Tahir (13 not out) was the highest partnership of the Super Kings innings.

The spectacular failure included youngsters Ruturaj Gaikwad and N. Jagadeesan, both out for ducks. Dhoni struggled to make 16 before edging one to the wicketkeeper.

Boult eventually picked up four wickets for 18 runs, 13 of those coming in the final over. Bumrah (2/25) and leg-spinner Rahul Chahar (2/22) picked up two wickets each.