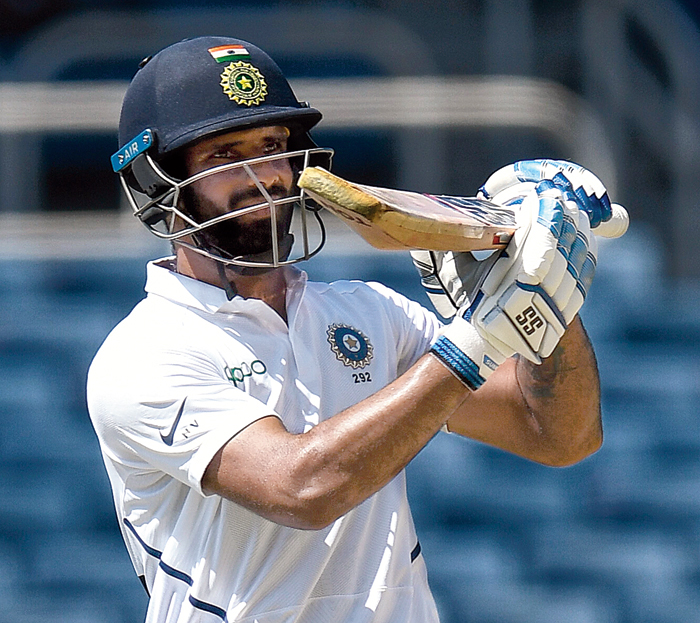 Hanuma Vihari’s international career so far is about six away Tests.

Having experienced what he calls “a challenging ride” since his debut last year at The Oval, Vihari has his eyes set on success at home.

It may not be very easy for the 25-year-old as India resume their World Test Championship campaign next month against South Africa, who would be unleashing their quality pace trio — Kagiso Rabada, Vernon Philander and Lungi Ngidi.

But Vihari remains unfazed. “The preparation bit is always the same for me, no matter who I am facing. Because, all the three teams we played last have quality bowling attacks.

“England, Australia… And even the West Indies in their home conditions have a good attack… Honestly, what the opposition bowlers possess is something I don’t consider much because I don’t put too much pressure on myself looking at the rival bowling attack.

“I just focus on my game and the areas where I need to improve. That’s the formula, which I have worked on and will continue doing so,” Vihari, finishing as India’s highest scorer (with 289 runs and averaging 96.33) in the Test series versus the Windies, told The Telegraph from Hyderabad on Monday.

“I’ll be preparing accordingly. I’ll be going to the NCA in the coming week and train there for 10 days. And if I find Rahul Dravid there, it obviously will be of great help.”

However, favourable conditions don’t mean India can underrate the opposition, Vihari warned. “Every match is important in the World Test Championship. We are a strong side at home, so we’ll look to win every match.

“We’re very well used to these wickets, but can’t be complacent at all,” he said.

Vihari agreed he may have to make certain technical and tactical adjustments for the Tests against South Africa and Bangladesh, but there won’t be much change in his mindset.

“I need to make a few technical adjustments, but the mindset remains the same wherever I play. Tactically also, there could be some adjustments I’ll have to make.

“But overall, whatever the conditions are, my mindset and intent will be the same,” he emphasised.

Batting alongside Ajinkya Rahane and stitching vital partnerships with him in India’s tour of the Caribbean have also been a boon for Vihari.

“It’s been a very good experience for me as Ajinkya was in very good form. Stitching partnerships with him enhanced my application, while there was good communication as well between both of us.

“Besides, if the No. 5 and No. 6 batsmen bat well together, it’s good for the team as we can get important partnerships at the right time. Those could turn out to be crucial factors in the end,” Vihari elaborated.

The three half-centuries and a hundred that Vihari has hit so far in his Test career have all come batting at No. 6. As of now, only twice he has batted higher up the order — opening at the MCG Test last December — managing scores of eight and 13.

“Well, if you look at our batting order, there is not enough scope to bat higher up because we have some excellent players there. So, wherever the team management wants me to bat, I have to be open to it.

“Obviously, I’ve batted higher in first-class cricket. But in international cricket, you can’t really pick and choose. So, I am happy to bat where I am batting at present,” Vihari explained.