With the win, The Red Devils moved above Spurs into sixth, level on 31 points with fifth-placed West Ham 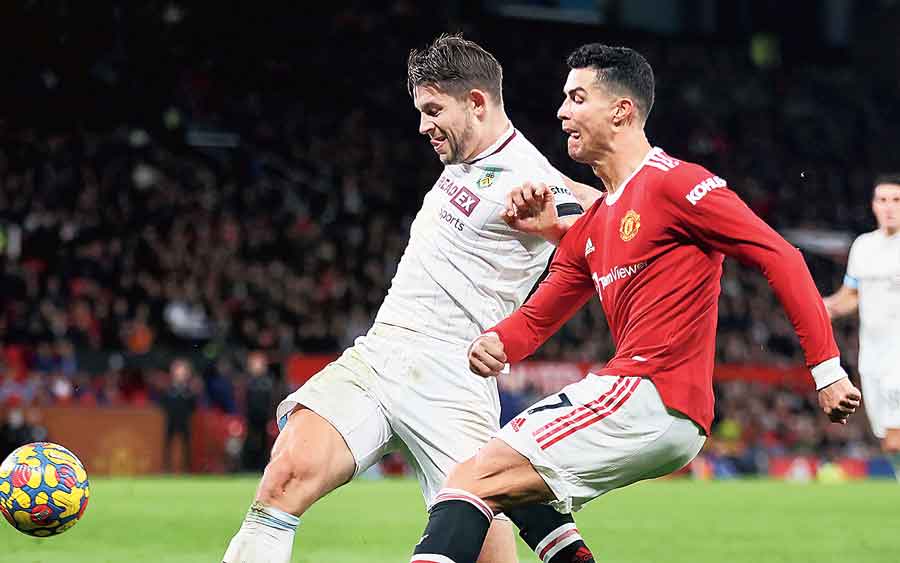 Manchester United moved up to sixth in the Premier League thanks to a 3-1 win over struggling Burnley at Old Trafford on Thursday to maintain their unbeaten start under interim manager Ralf Rangnick.

With the win, United moved above Spurs into sixth, level on 31 points with fifth-placed West Ham United. Burnley remain at 18th place on 11 points. After the poor display in Monday’s 1-1 draw at Newcastle, Rangnick made six changes to his side with Edinson Cavani starting in attack alongside Cristiano Ronaldo.

The wide-open nature of the game was evident from the outset with Chris Wood missing an early chance, heading wide for the visitor's and then Ronaldo wasted a glorious opportunity, firing over the bar when clear on goal.

But it was not long before United had the lead – Mason Greenwood’s pass to Ronaldo was mis-controlled but Scott McTominay leapt on the loose ball and struck a low drive through the crowded area and into the bottom corner.

Luke Shaw then burst through the middle of the Burnley defence but fired his shot into the side netting as United visibly grew in confidence. The second was not long in coming, after a mix-up in the Burnley defence, Jadon Sancho cut in from the left and his low shot took a deflection off the outstretched foot of Burnley skipper Ben Mee and beat Wayne Hennessey.

United, playing with an attacking 4-4-2 formation, were leaving space for Burnley to break into and looked far from secure at the back but their positive approach paid off when they grabbed the third goal in the 35th minute.

Hennessey tipped a fierce McTominay drive against the post but the ball fell straight to Ronaldo, who guided the ball into the unguarded goal.

That felt like game over but Burnley kept themselves in with a chance thanks to a fine solo effort from Aaron Lennon, the former Spurs winger taking advantage of a poor touch from Eric Bailly, dribbling into the United box and beating David De Gea with a well-placed angled shot.

United are four points behind fourth-placed Arsenal, with a game in hand, as they search for a way into the top four and a place in next season’s Champions League.

“The Board accepted the postponement application as the club (Newcastle) does not have the required number of players available for the match (13 outfield players and one goalkeeper),” the league said in a statement.

Three Liverpool players and more staff members have tested positive for Covid-19 ahead of the trip to Chelsea but it is too soon to ask the Premier League to postpone the game, manager Juergen Klopp said on Friday.

“We have three new cases in the team and a few more in the staff, so it’s not so cool at the moment,” Klopp told reporters ahead of Sunday’s game in London.