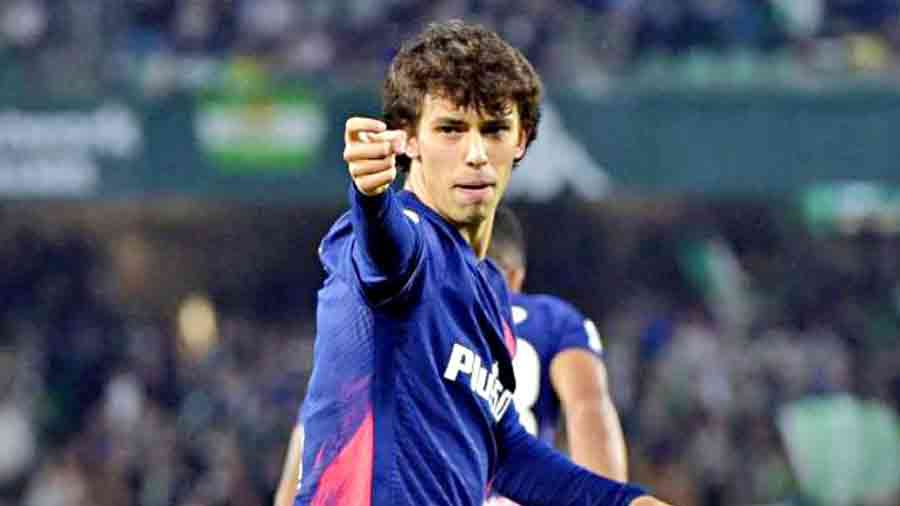 Felix opened the scoring in the first minute with a close-range strike from an Angel Correa cross.
Twitter
Reuters   |   Published 08.03.22, 12:59 AM

Joao Felix scored twice as he helped Atletico Madrid earn a 3-1 win at Real Betis in La Liga on Sunday, ensuring they leapfrogged their rivals into fourth place in the standings. Atletico are tied on 48 points with third-placed Barcelona, who won 2-1 at Elche, although the Catalans have a game in hand. Both teams trail leaders Real Madrid by 15 points.

Betis, who started the weekend in third place, dropped below Barca and Atletico to fifth place with 46 points from 27 games.

Felix opened the scoring in the first minute with a close-range strike from an Angel Correa cross. Betis equalised just before the break when Cristian Tello fired home an angled shot from the edge of the box.

Atletico dominated following the break. Felix scored his second after Marcos Llorente led a quick counter-attack before crossing to the Portuguese, who made the final touch from inside the box.

Substitute Antoine Griezmann, who is slowly working his way back from injury, provided the cross that allowed Thomas Lemar to complete the 3-1 victory in the 80th minute.

Olivier Giroud’s second-half goal sent AC Milan back to the top of Serie A as they battled to a 1-0 win away at Napoli on Sunday.

The victory means that Stefano Pioli’s table-toppers now have 60 points, two ahead of city rivals and reigning champions Inter — who have played a game fewer — and three more than Napoli in third. The triumph was Pioli’s first in 12 attempts over opposite number Luciano Spalletti, as Milan look to win a first Scudetto since 2011.

However, the 56-year-old Pioli insisted his side are underdogs despite leading the pack. “They’re three important points for the league position. The boys worked a lot without the ball, as a unit,” Pioli told DAZN.