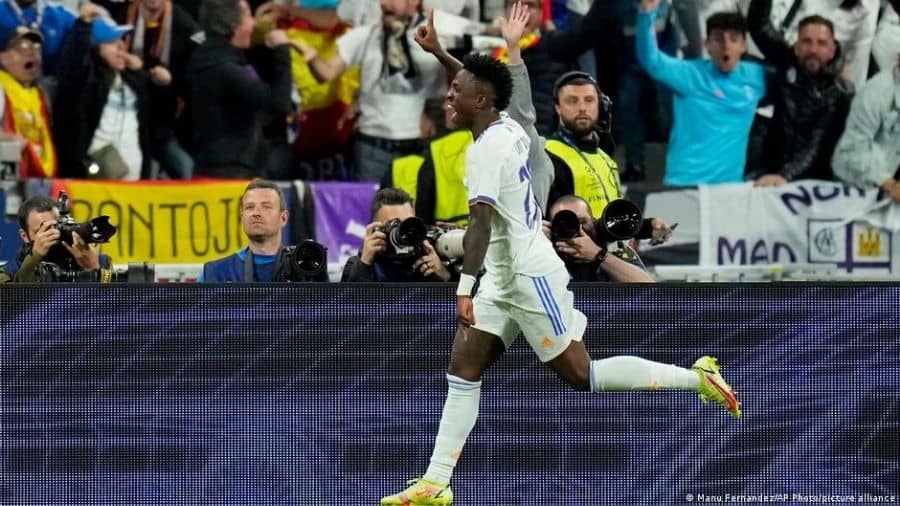 Real Madrid are champions of Europe for the 14th time after beating Liverpool in Paris. The match was severely delayed with ugly scenes around the stadium but Real and Toni Kroos, did what they do best.

The seizing of a rare moment. A pinpoint cross, a loss of defensive concentration, a back-post finish from Vinicius Jnr. It may not have been as dramatic as their path to reach Paris but this Real Madrid team once again head home with the trophy, even if it’s not entirely clear how they keep doing it.

Until that goal, the 2022 final had been defined by delays, confusion and acrimony. On the pitch, Karim Benzema’s first-half strike was ruled out after an enormous wait, while outside fans still tried desperately to get inside the stadium fences and clashed with police and security personnel.

Even before that, kickoff had been delayed for more than half an hourbecause fans weren’t able to make it in to the stadium. A series of poorly designed entrances causing bottlenecks, inadequate numbers of stewards and poor communication were among many failings.

Organizers UEFA claimed fans arriving late was the problem but this reporter arrived three hours before kickoff and still had to wait about 40 minutes to get squeezed through the initial ticket check queue. Things only got worse the closer it got to kickoff.

With hundreds of Liverpool fans streaming in to fill the pockets of empty seats, French police resorted to tear gas to keep them back. Just as with the final of the Europa League last month and Euro 2020 last summer, organizers UEFA have plenty to answer for. Though it’s rarely apparent who they answer to.

"We are hugely disappointed at the stadium entry issues and breakdown of the security perimeter that Liverpool fans faced this evening at Stade de France," read a statement released by Liverpool in the second half.

"This is the greatest match in European football and supporters should not have to experience the scenes we have witnessed tonight. We have officially requested a formal investigation into the causes of these unacceptable issues."

Those who made it in for the start saw their team begin brightly enough, with Thibaut Courtois keeping out Mohamed Salah and Sadio Mane early on. But, just like their Premier League rivals Manchester City in the semifinals, they could not deal the fatal blow. With this Madrid team in this competition, it’s tempting to think there’s no such thing.

Courtois was immense, with a late save from Salah capping a man-of-the-match performance. Karim Benzema and Vinicius were willing workers who made the most of what they were provided with. But really it’s experience, and a series of intangibles that seem to make up the magic of the men in white.

Carlo Ancelotti’s side have an unmistakeable aura, experience and an unshakeable belief forged in success. Those last two qualities combine in Toni Kroos. While nearly half of the Stade de France erupted after the goal, and nine of Real’s outfield players went to join them, the German strolled calmly over to his coach.

With the comebacks of previous rounds often sparked partly by the introduction of dynamic young French midfielder Eduardo Camavinga, and the removal of Kroos, there may have been some suggestion that the veteran midfield axis of Kroos, Luka Modric and Casemiro might be broken up. That’s not Ancelotti’s style.

Just as he had in the semifinal, the Italian consulted his metronome to try to keep the rhythm of the game to his liking: "It describes him perfectly as a coach," Kroos said of the chat they had in the City game. But it also reveals a lot about what a key cog in the Real wheel Kroos remains. His brain has become as important as his boots to Ancelotti. "I don't think there's a coach closer to his players," said Kroos after the match.

Ancelotti's trust was repaid and the trio remained in place until Modric was withdrawn in the 90th minute. All three players have now won five Champions League titles, while it’s a record-breaking fourth for Ancelotti.

After a last, desperate chorus of 'You’ll Never Walk Alone' rang out from the Liverpool stand, Courtois claimed another cross and launched the ball long before Kroos' tactical foul prevented a final Liverpool attack and secured number 14. Experience won’t allow him or Real to stop.

As mentioned, earlier the at Stade de France in Paris on Saturday started after a 36-minute delay (1.06am IST Sunday) due to crowd trouble.

“The kick-off must be delayed for some minutes for security reasons,” a stadium announcer said 15 minutes before the 2100 local time (12.30am IST) scheduled start.

“The start of the match is delayed due to the late arrival of fans,” it was announced later.

“Supporters attempted to penetrate the stadium. They forced their way through the first filter. The screening at the Stade de France is watertight,” French police said. Reuters TV footage showed riot police chasing fans outside the stadium as they ran away and others being escorted away. “We have intervened to push back fans trying to force their way through,” French police said.

From Deutsche Welle Newsfeed and with Reuters inputs