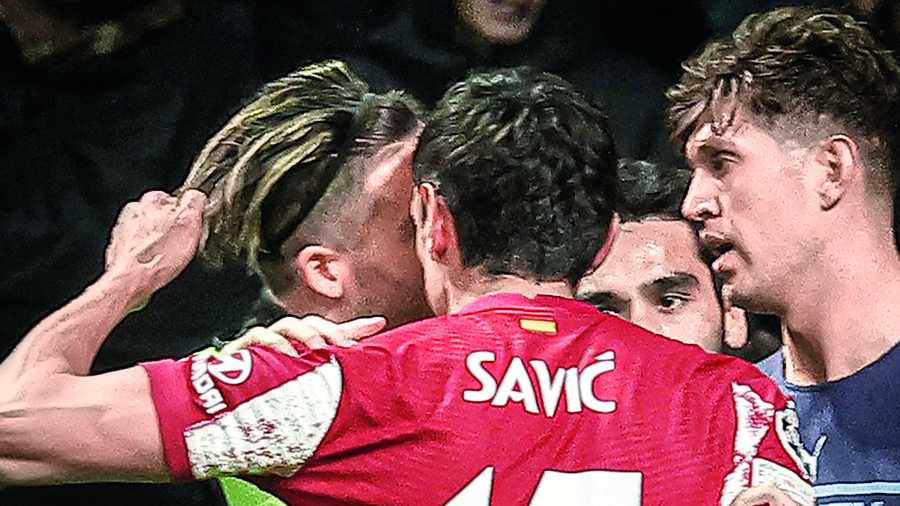 Atletico Madrid’s rough approach didn’t end at the final whistle against Manchester City. The melee in Madrid spilled into the tunnel long after full time had blown on a Champions League campaign that Diego Simeone’s side tried to keep going with a variety of dark arts and rough tactics.

Sime Vrsaljko was never even brought off the substitutes’ bench in the quarter final, which ended 0-0 as City advanced 1-0 on aggregate. The Atletico defender instead tried to make his impact in the tunnel in incidents captured in broadcast footage on Wednesday.

Vrsaljko threw something at the City contingent and had to be held back as he was angrily gesticulating. On the other side of the tunnel, City defender Kyle Walker had to be restrained by the visiting contingent as they walked up the steps.

Still, Vrsaljko tried to launch himself at the City players. And as they approached the dressing rooms, police intervened in an attempt to restore calm. The scenes will surely be investigated by Uefa. City manager Pep Guardiola didn’t want to stoke the tensions.

“Everyone saw the action but I have nothing to say,” Guardiola said when asked if he had liquid thrown on him.

Tensions were already simmering when a flare-up happened in the 89th minute that saw an already-aggressive Atletico side reduced to 10 men. It was sparked by Felipe kicking out at City forward Phil Foden as Atletico were chasing the goal to force extra time.

Foden’s head was already wrapped in a bandage after an earlier challenge in the game from Felipe as they contested a high ball. As Foden was rolling around, perhaps to waste time, Atletico defender Stefan Savic charged over, tugging at his shirt and attempting to drag him up.

Once calm was restored, Felipe received his second yellow card. The Brazilian hadn’t initially been booked for causing the cut to Foden’s head in the first half but for clipping Kevin De Bruyne.

The Premier League champions, though, weren’t unsettled by the mayhem. Guardiola’s side held on through 13 minutes of stoppage time to reach the semi-finals, battered and bruised.

The semis berth could have come at a cost. Guardiola admitted his side are “in big trouble” as a result of injuries picked up on Wednesday.