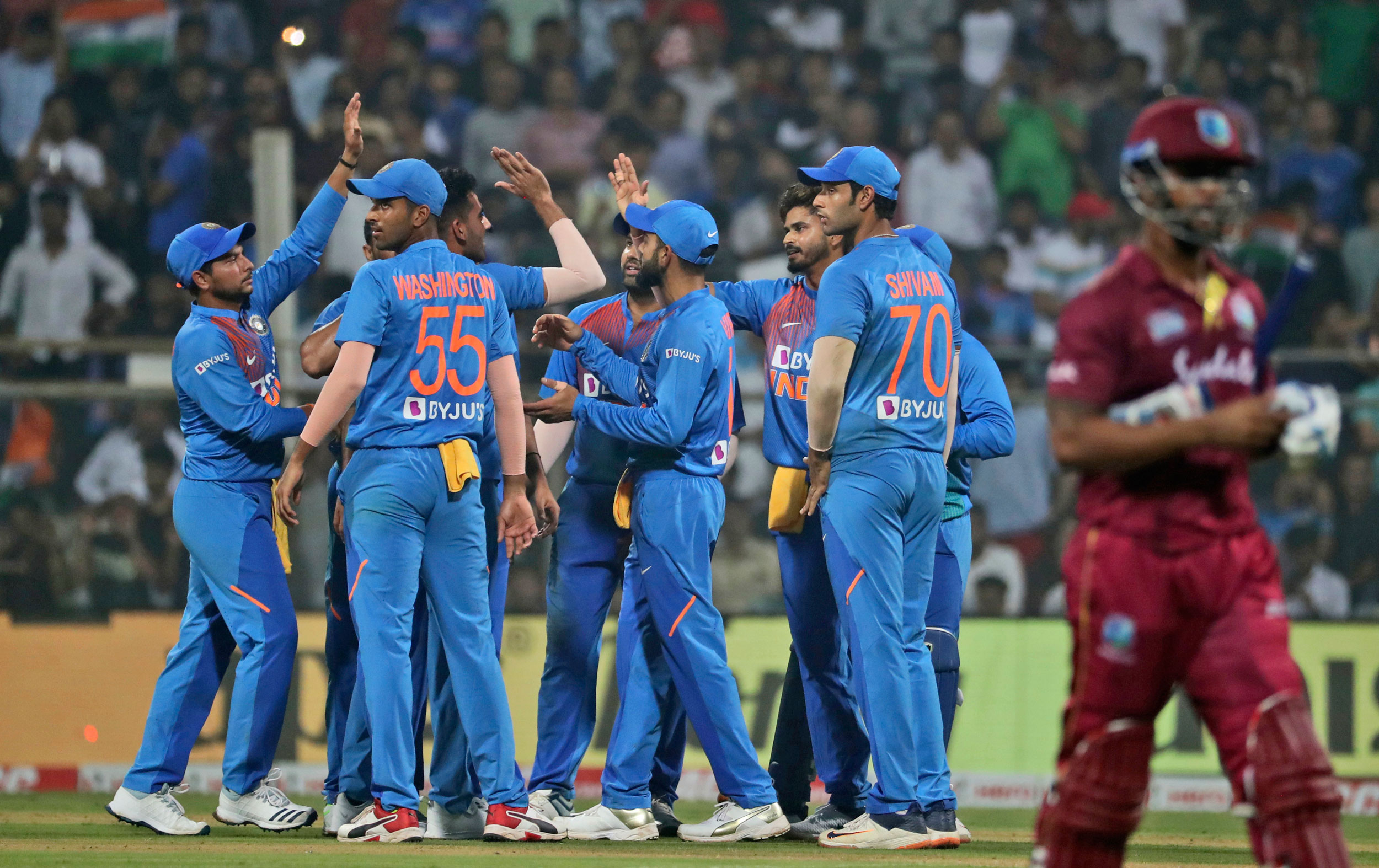 KL Rahul was determined, Rohit Sharma elegance personified and Virat Kohli at his brutal best on his second wedding anniversary as India whipped the West Indies by 67 runs in the third and final T20I at the Wankhede to seal the series 2-1 on Wednesday.

There was maximum entertainment as the trinity of Rahul (91 off 56 balls), Rohit (71 off 34 balls) and captain Kohli (70 not out off 29 balls) and their ‘Sixathon’ propelled India to a mammoth 240/3 that more or less took factors like dew, flat track out of the equation.

Besides, the Windies were rocked even before they got down to chase the imposing target as opener Evin Lewis hurt his right knee and had to be taken to hospital. It was later learnt that the left-handed batsman had a soft tissue damage to his right knee, which would affect his ability to run between the wickets.

Lewis now appears doubtful for the three-match ODI series too with barely three days to spare for the first one-dayer, which is in Chennai on Sunday.

India, going into this game, had lost thrice batting first. On Wednesday too, Kieron Pollard won the toss and decided to bowl. But Rohit, Rahul and Kohli ensured they scripted a different story this time around.

“We had spoken a lot (about batting first and winning). It was about going out there and executing. I was in the zone and I carried on.

“I told KL he needs to bat long and hold one end,” Kohli said during the post-match presentation.

“It was a special night and one of the best innings I have played. And batting first we won, so it feels really good,” Kohli beamed.

“I know I can contribute in all three formats. It is about putting your mind into it.

“Now with the (T20) World Cup coming up, there is motivation… Also, my part becomes crucial, as I have to play two roles. When you are not playing T20s for a while and come back and play in this fashion, it feels really good.”

There were 16 sixes that lit up the Mumbai skyline with Rohit hitting five, Rahul four and surprising everyone, Kohli topped it smashing as many as seven. Rohit and Rahul gave India a brilliant start as they stitched 135 runs in 11.4 overs.

The true nature of the pitch with no lateral movement only made it easier as the batsmen could hit through the line. Rohit in particular pulled with disdain and also got down on one knee to hit the slog sweep towards the cow corner.

Rahul was more classical in his approach with shots square off the wicket. But the man who made the difference between a good and winning total was undoubtedly skipper Kohli, who again looked charged up, enjoying his battle with Kesrick Williams.

After Rishabh Pant’s nought stuck out like a sore thumb, Kohli took it upon himself during the 95-run stand with Rahul as he demolished the bowlers. There was another flicked maximum off Williams, whom he intimidated after playing each shot.

“The way Rahul and Rohit played was the key. Batting first, we have been too tight and hesitant, but this pitch allowed us to play freely. It was a good lesson for us and now we need to remember it…

“You don’t really feel the pressure when you have 20-25 extra runs on the board,” Kohli emphasised.

“Playing the World Cup in Australia, we will have to figure out how big the boundaries are,” he added.

In reply, the Windies managed only 173 for eight with Mohammed Shami (2/25 in four overs) enjoying a good outing in his first game of the series. With a cushion of runs on the board, Deepak Chahar (2/20 in four overs) was also steady while Bhuvneshwar Kumar (2/41 in four overs) and Kuldeep Yadav (2/45 in four overs) also got wickets even though they were a bit expensive.

The visitors were never in contention and captain Pollard’s (68 off 39 balls) six sixes in familiar surroundings were nothing more than consolation for them.

Pollard, however, took the positives from the series despite such a heavy defeat in the decider. “We are taking the positives.

“When you look at our performances with the bat throughout the series, it has been consistent and we’ll take that as a unit. At the end of the day, we know we need to get better at executing with the ball,” he said.

“There are a lot of emerging players coming through. Yes, the bowling is a concern, but we have a roster of guys coming through… You need to do the right things day in day out.”