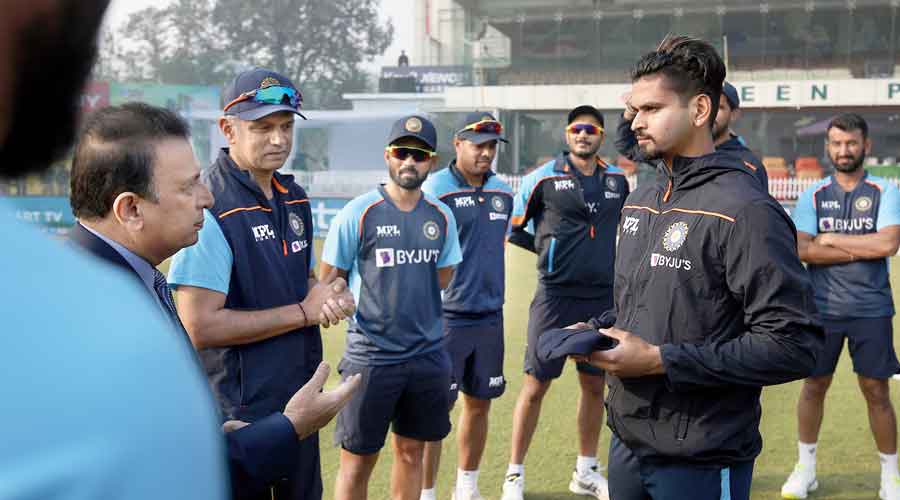 The ushering in of a new era with Rahul Dravid as head coach has meant the return of the old world charm.

Stressing on the need to giving special importance to former cricketers, Dravid has brought back the practice of handing over caps to debutants by former India players. This custom had been started by Anil Kumble, when he was the head coach, but discontinued during the Ravi Shastri-Virat Kohli era.

On Thursday in Kanpur, former captain Sunil Gavaskar presented debutant Shreyas Iyer with his India Test cap. Shreyas kissed the cap upon receiving it and wore it. Later he was hugged by all members of the team.

Dravid himself had handed the maiden cap to Venkatesh Iyer during the opening T20I in Jaipur, while Ajit Agarkar gave the India cap to Harshal Patel ahead of the second T20I.

Shreyas became the 303rd player to make his Test debut for India and before the toss Dravid invited India’s greatest opener and former captain to present the cap to his fellow Mumbaikar. Later during commentary, Gavaskar said he reminded Shreyas about the hard work and dedication that had enabled him to reach this level. Gavaskar, who had been handed his India cap as the 128th player before embarking on his epoch-making tour of the West Indies in 1971, also impressed upon Shreyas the essence of wearing the Test cap.

The culture of former cricketers presenting the national cap is very much prevalent in Australia and England. It’s not just restricted to debutants since caps to commemorate a special occasion (100th or 150th Test match for example) are also handed over by a former captain or cricketer of that country.

During the time Shastri was the head coach, it was either the captain or some senior player or a member of the support staff who presented the cap to debutants.

“He (Dravid) is somebody who’s big on setting a good team culture. He was always a team-man when he was playing and that is the kind of culture he wants to bring in here where everyone is putting the team ahead instead of personal goals,” KL Rahul had said ahead of the T20I series.

Shreyas had got his first Test call-up in 2017 when he came in as a replacement for the injured Virat Kohli in the fourth Test against Australia in Dharamsala but didn’t get to play.