Dismissing India for 219, the Black Caps were firmly placed at 104/1 in 18 overs before rain took centre stage 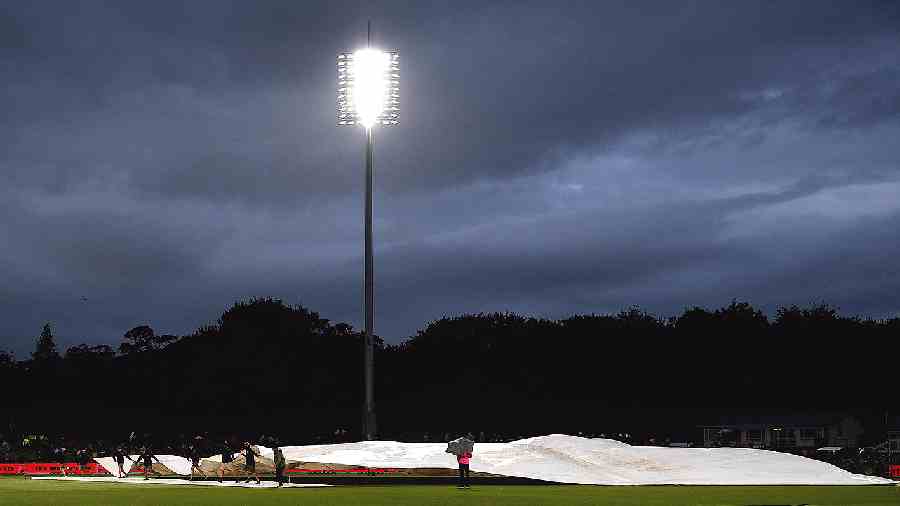 Ground staff cover the pitch during the final ODI between India and New Zealand in Christchurch on Wednesday.
Getty Images
Our Bureau   |   Calcutta   |   Published 01.12.22, 05:42 AM

Just as it was in the T20I leg, rain had the final say in the 50-over format as well. The third and final ODI at Hagley Oval in Christchurch on Wednesday also had to be abandoned due to rain with New Zealand taking the series 1-0, having beaten India by seven wickets in the opener.

The second ODI, too, was abandoned because of rain with only 12.5 overs possible.

Had there been no rain interruption on Wednesday, New Zealand could have won the series 2-0.

Dismissing India for 219, they were firmly placed at 104/1 in 18 overs before rain took centre stage.  India never looked comfortable in the 47.3 overs they batted with notable contributions only from Shreyas Iyer (49) and Washington Sundar (51). Suryakumar Yadav was again pushed down at No.5 and couldn’t get going while Rishabh Pant’s lean patch continued.

Pant’s highest score in his last nine innings in limited-overs cricket is just 27, which could be a worry for the Indian team management. Captain Shikhar Dhawan, though, feels Pant needs to be backed when not doing well.

“You have to see the larger picture  and who your match-winner is.  We know based on his skills that he (Pant) is a match-winner. You need to back him when he’s not doing well,” Dhawan said.