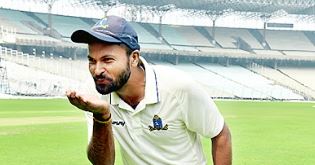 Bengal pacer Mukesh Kumar earned his maiden India A call-up when he was included for the three four-day games versus New Zealand A, beginning September 1 in Bangalore. Top-order batsman Abhimanyu Easwaran is the other player from Bengal in the India A squad, which will be led by Gujarat batsman Priyank Panchal.

The Chinnaswamy Stadium in Bangalore will be hosting the first and the third four-day games, while the KSCA Rajnagar Stadium in Hubli stages the second.  Now a senior pro in the Bengal team, Mukesh has been one of the standout bowlers for the side. It’s his consistent showing with the red ball since the 2019-20 Ranji Trophy that has eventually earned him a place in the A squad.

Mukesh, though, is quite confident about his preparation as he gets ready for what would be his biggest assignment so far in his first-class career. “I’m well prepared for the series,” he said on Wednesday.

“I’ll be focusing on getting the basics right and looking to catch the opposition batters off-guard with the delivery that comes in. That’s my surprise weapon. “If I can jag the ball back in with the seam position appearing as if it would move away, that becomes very difficult for the batsman to deal with. I’ve worked on my pace as well.

“So yeah, I’m quite optimistic of putting up an impressive show if I am selected in the XI,” Mukesh added.  With 100 wickets so far in 27 first-class appearances, Mukesh has also been working on extracting more bounce. “I want to strike with the bouncer as well as that will in my effort to make myself a complete bowler.

“So over the last few days, I’ve been looking to jump a little higher at the delivery stride in order to extract more bounce,” the 28-year-old said.  Mukesh will also be banking on the tips from Bengal’s bowling coach Shib Shankar Paul as well as the motivating words of head coach Laxmi Ratan Shukla.

“For the last few weeks, I have been training regularly in our practice sessions (at Eden Gardens’ indoor centre). So I have made sure to pick up the tricks from our bowling coach, who comes up with his regular share of advice. “To speak of our head coach, he certainly has a lot of faith in me and the way he motivates does make me feel a lot better. In fact, he believes I’m quite capable of going the distance,” Mukesh said.

Top-order batsman Rajat Patidar and young pacer Umran Malik, who both had a successful IPL this year, have also been picked in the squad along with Mumbai run machine Sarfaraz Khan besides the likes of Ruturaj Gaikwad, Kuldeep Yadav and Prasidh Krishna.