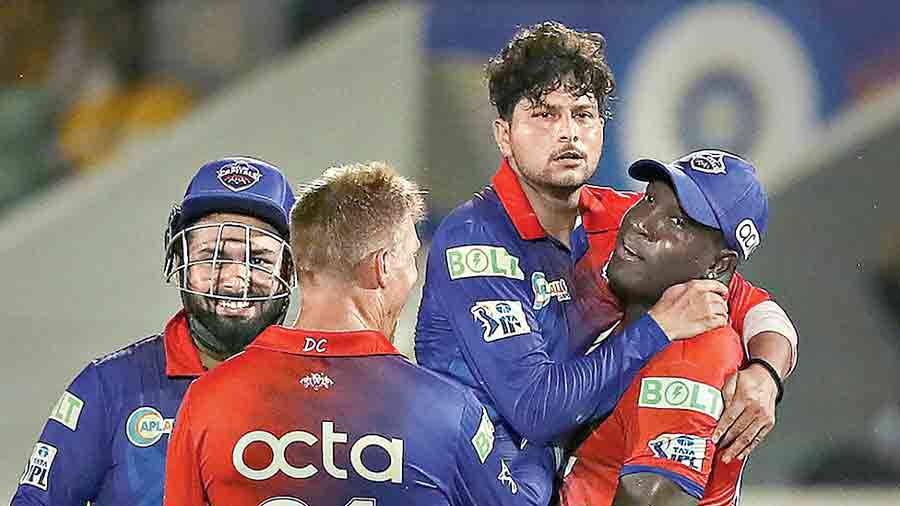 Kuldeep Yadav (second from right) celebrates the wicket of Umesh Yadav at the Brabourne Stadium on Sunday.
PTI
Our Bureau   |   Published 12.04.22, 01:40 AM

Kuldeep Yadav has bounced back just when the left-arm wrist spinner was being regarded as a spent force.

On Sunday, he reserved his best against Kolkata Knight Riders, the team that had made him warm the bench last season before a knee injury prematurely ended his stint and forced him to fly back home from the UAE. His four for 35 helped Delhi Capitals defeat KKR by 44 runs in Mumbai.

“Our bowling performance has been our biggest positive this season,” Kuldeep said. “When we were bowling against Mumbai Indians in our first match, it looked like they were going to score over 200 at one point, but we restricted them to a total of 177/5.

“The fast bowlers have been bowling really well. They kept the pressure on the opposition in the Powerplay against KKR,” he added.

Kuldeep, who was adjudged the Player of the Match, also spoke about his fantastic running catch to dismiss Umesh Yadav off his own bowling.

“I knew that only I could go for that catch. The ball was quite far away from everyone else. I kept my eye on the ball throughout while running for the catch and managed to reach for the ball in the end. The catch felt really good.”

Kuldeep had made his IPL debut, for KKR, in 2016 and across the next two seasons, he became their highest wicket-taker, with 29 wickets in 27 games at an economy rate of 8.20.

Then his world turned upside down. After being taken to the cleaners by England on a flat Edgbaston pitch in the 2019 World Cup, he was no longer a regular in India's white-ball sides.

By 2020 he had lost his place in the KKR XI too, with the franchise settling for Sunil Narine and Varun Chakravarthy.

Having been picked by Delhi Capitals as one of their lead spinners at the mega auction this year, and then being told by Ricky Ponting that he would play every game, has definitely boosted Kuldeep.

He has increased his pace to match the demands of today’s T20 cricket, putting himself on the watchlist for World Cup selection.

Delhi Capitals have a five-day break before their next match. “These two points were really important for us. The morale in the team will be high as we prepare to play our next game on Saturday. This win will ensure there is positive energy in the camp during our five-day break,” he said.