Ravindra Jadeja too delivered, guiding Ajinkya Rahane’s team to a well-placed 258/4 at stumps on Day I of the first Test at Green Park in Kanpur 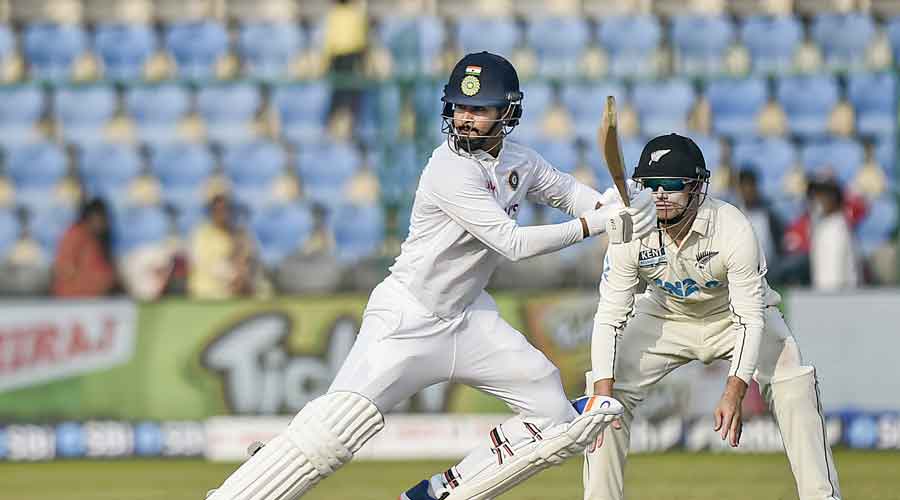 India Test debutant Shreyas Iyer during his unbeaten 75 against New Zealand on Day I of the first Test at the Green Park Stadium.
PTI
Sayak Banerjee   |   Published 26.11.21, 02:04 AM

Rahul Dravid has every reason to be pleased with how his players responded on his first day in Test cricket as Team India head coach.

After stand-in captain Ajinkya Rahane won a good toss and rightly opted to bat first, Shubman Gill (52) and debutant Shreyas Iyer (75 batting), who have both spent a fair amount of time under Dravid’s supervision during his stint as India A coach as well, laid the foundation.

Ravindra Jadeja (50 batting) too delivered, guiding India to a well-placed 258/4 at stumps on Day I of the first Test at Green Park in Kanpur. The ball has kept low on some occasions from the opening session itself, together with a rough patch which should come into effect more as the game progresses.

For India to be placed strongly, a bulk of the credit goes to Shreyas and Jadeja for their resistance as well as intent, two key components of their 113-run stand so far that bailed India out from a tricky position. Kyle Jamieson (3/47) and Tim Southee were getting a fair amount of reverse swing then, while a few balls from the former didn’t bounce much, particularly the one that helped him castle Rahane.

What made the going smoother for Shreyas was Jadeja being cautious throughout. The duo were also helped by issues in Southee’s right groin, which barred him from bowling for a major part of the first hour of Thursday’s final session. Shreyas made full use of that period, utilising almost all scoring opportunities.

Being a tad defensive against a disciplined Will Somerville, he focused on finding the gaps. But against debutant left-armer Rachin Ravindra, Shreyas didn’t cease to take his chances.

Shubman was beginning to look quite sharp in his comeback Test after an injury ruled him out of the England series. But his technical flaw once again did him in.

Jamieson brought the ball back in a little bit, and the big gap between Shubman’s bat and pad uprooted his stumps.

New Zealand though allowed Shreyas and Jadeja to rotate the strike. They also didn’t include Neil Wagner in the XI when many in the cricketing fraternity talk about left-arm quicks being India’s Achilles’ heel.