At 18 years and 329 days, Shaw reached the milestone off just 99 balls 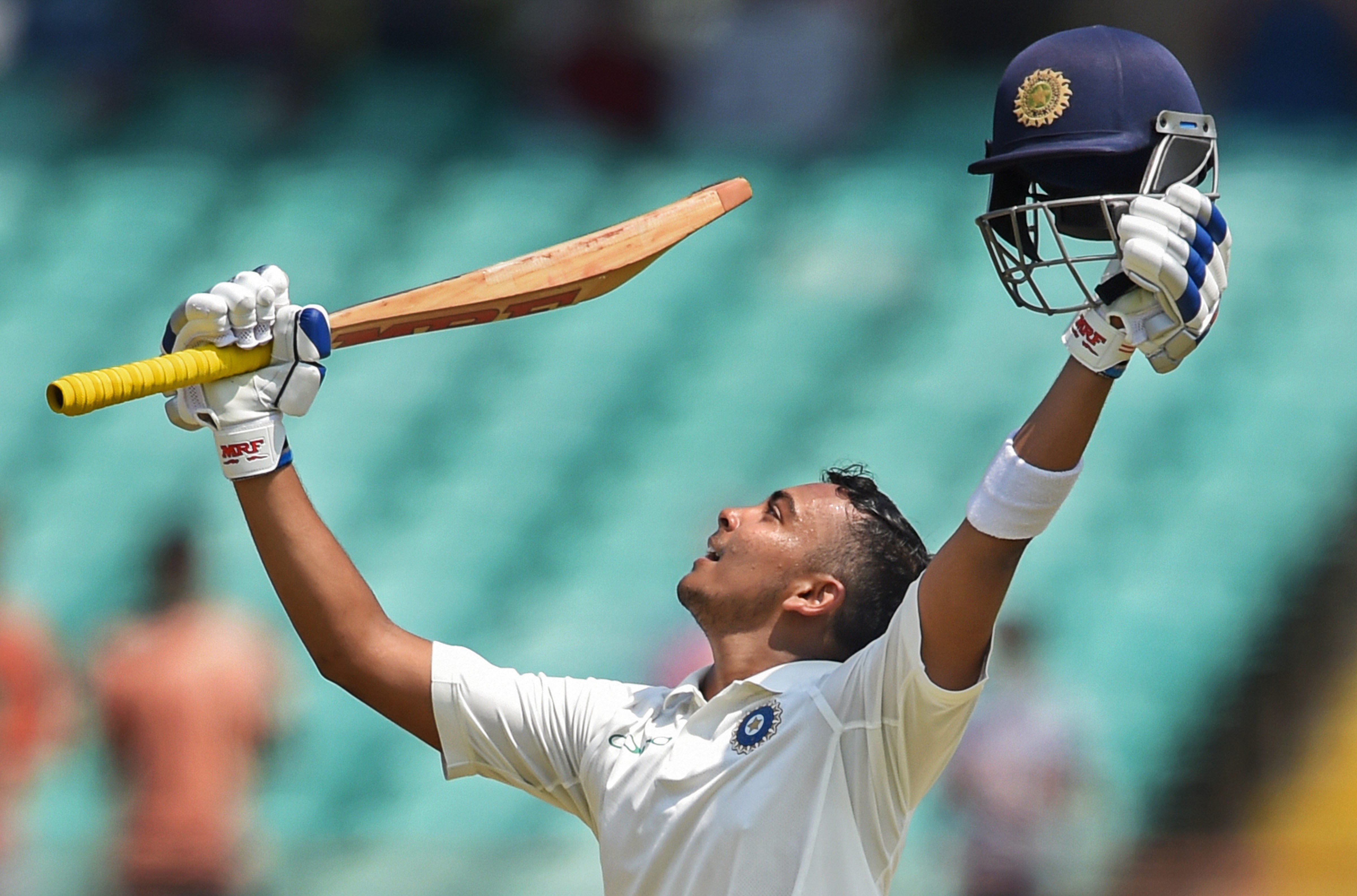 Teenage sensation Prithvi Shaw announced his arrival in top-flight cricket by becoming the youngest Indian to score a Test century on debut, headlining the home team's march to 364 for four against West Indies on day one of the series-opener here.

Skipper Virat Kohli (72 not out off 137) and his deputy Ajinkya Rahane (41 off 92) then took the innings forward with a 105-run stand in the final session, putting India in the driver's seat before the latter was caught behind off spinner Roston Chase.

Kohli looked set for another hundred and was batting alongside Rishabh Pant (17 not out off 21) at close of play. Eighty nine overs were bowled on day one with India scoring at 4.08 runs per over.

The West Indies, handed a big setback even before toss with the last-minute withdrawal of captain Jason Holder, looked ordinary at best on the field. Barring pacer Shanon Gabriel (1/66), none of the bowlers troubled the Indian batsmen on a greenish surface which did not seem to do much.

The opposition attack was far from threatening but due credit must be given to Shaw, who batted like a seasoned campaigner in his first match for India. His back-foot play off the pacers was a treat to the eyes and when spinners were deployed, he was not afraid to use the long handle.

At 18 years and 329 days, Shaw reached the milestone off just 99 balls, adding to a host of records he holds in his blossoming career. He had earlier made waves by reaching three figures in his first Ranji Trophy appearance and was the youngest to hit a century on Duleep Trophy debut.

In the process, Shaw also became the second youngest Indian to score a maiden Test ton after the legendary Sachin Tendulkar.

Shaw, who was 75 not out at lunch, reached the three figures in the afternoon session with a typical punch to the cover, the same way he got his first runs in international cricket.

More than half of his runs came through boundaries, 19 in total. Unfortunately, Shaw fell at the stroke of tea, in what was a soft dismissal as he chipped one straight into the hands of leggie Devendra Bishoo.

He was not facing one of the best attacks but he gave ample evidence of his brilliance on way to a memorable hundred. Pujara too looked at ease at the other end until he was caught behind off debutant Sherman Lewis, missing out on a 16th Test ton.

In the morning, Shaw, who became the 293rd cricketer to represent India in Tests, showed supreme confidence from ball one, on which he offered a watchful leave.

The Mumbaikar punched the second ball he faced towards the cover boundary for a three, his first runs in international cricket, easing whatever nerves left inside.

Gabriel was clocking in the higher 140kmph but that did not faze Shaw. Gabriel trapped his opening partner Rahul in front with a sharp incoming delivery to give the West Indies an early breakthrough. Rahul was better off not taking the DRS as the ball was clearly crashing into the stumps.

Shaw, however, continued batting with confidence and his first boundary came in the second over bowled by Keemo Paul, another back foot punch towards the point boundary.

He got more aggressive in Paul's following over, hitting him for three fours as the pacer was duly punished for bowling far too many looseners. After Rahul's dismissal, Shaw and Pujara gave the innings a move on and did not look in any sort of trouble.

While Shaw punched and drove effortlessly off pacers, he was equally comfortable against the spin duo of Bishoo and Chase.

The teenage prodigy collected two fours off Bishoo in the 11th over and did the same to Chase in the 20th over. He also produced a delightful straight drive on way to reaching his half-century which came off 56 balls.

The West Indians looked listless on the field as boundaries came at will for India. Their troubles had mounted even before the start of the game as Holder pulled out with an ankle injury, giving Kraigg Brathwaite a chance to lead the team.

Their lead pacer, Kemar Roach, was already ruled out of the series opener due to a bereavement in the family.