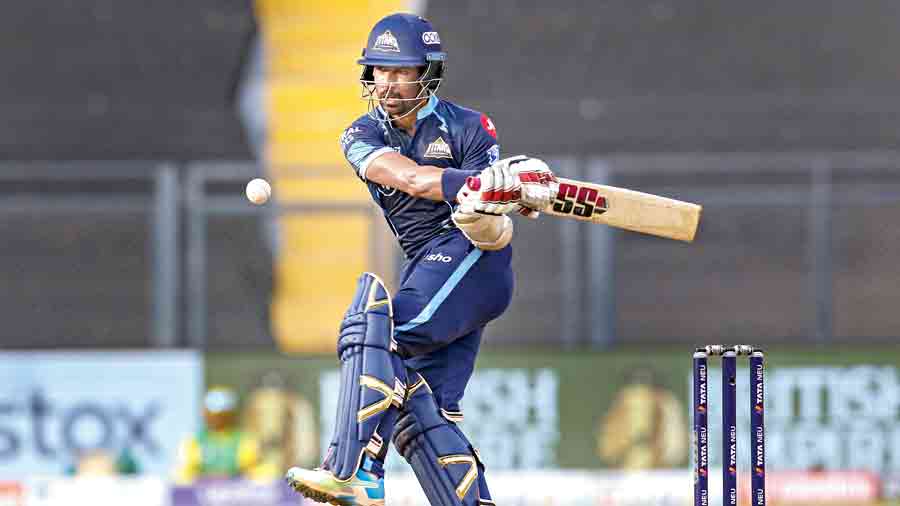 Wriddhiman Saha of Gujarat Titans on way to his unbeaten 67 against Chennai Super Kings at the Wankhede on Sunday.
PTI
Our Bureau   |   Published 16.05.22, 01:59 AM

Gujarat Titans’ mission playoffs had already been accomplished last week when they thrashed Lucknow Super Giants in their previous game.

On Sunday at the Wankhede in Mumbai, the Titans recorded a comfortable seven-wicket win over Chennai Super Kings to take their points tally to 20 and set themselves up to finish atop the standings at the end of the tournament’s league phase.

The Titans boast of a bowling attack that has been the most consistent in IPL 2022, and they delivered once again after Chennai won the toss and elected to bat.

Senior India pacer Mohammed Shami (2/19) finished with the best figures, while young Alzarri Joseph (1/15 in 3 overs) too did well as Chennai could manage only 133 for 5, a total far from challenging although the wicket was a bit sluggish.

In reply, Wriddhiman Saha (67 not out) carried his bat with assists from his opening partner Shubman Gill (18), Matthew Wade (20) and David Miller (15 not out) that helped the Titans wrap it up with five balls remaining.

For Chennai, who were already out of the playoffs race after losing to Mumbai Indians last Thursday, their intensity seemed to be lacking somewhat. Particularly, during their batting.

Shami picking up the reliable Devon Conway early in the third over had certainly hurt them before Moeen Ali (21) once again threw it away in spite of getting off to a start.

But Ruturaj Gaikwad (53) could have done better, especially after having spent so much time at the crease and getting support from Narayan Jagadeesan (39 not out), who played his first game of this IPL.

What has also been an integral part of the Titans’ successful debut season is Saha’s contribution at the top. Overcoming the off-field distractions in the lead-up to the competition, the 37-year-old wicketkeeper-batsman showed a lot of grit, cut down the unforced errors and relied on the basics, which has really worked well for him so far.

On Sunday, in conditions that weren’t ideal for batting, Saha showed fine temperament and treated the ball on its merit on way to yet another significant knock, which was also his third half-century, in this IPL.

Gujarat Titans will look to avoid making wholesale changes for their final game of the league phase, which is against Royal Challengers Bangalore at the Wankhede on Thursday.

Even if they lose that game, it won’t matter much to the Titans as they are already through to the playoffs. But it’s important to maintain the momentum, captain Hardik Pandya emphasised.

“We’ll see if any players need a game off to be fresh for the playoffs. Otherwise, for us it is important to keep up the momentum,” Hardik, who also bowled a couple of overs on Sunday versus Chennai Super Kings, said.

“Obviously, we want to give opportunities to new players, but we also want to ensure the core group throughout the season is intact,” he added.