Winning the toss and opting to bowl, Mumbai Indians bundled Chennai out for a meagre total of 97 in 16 overs 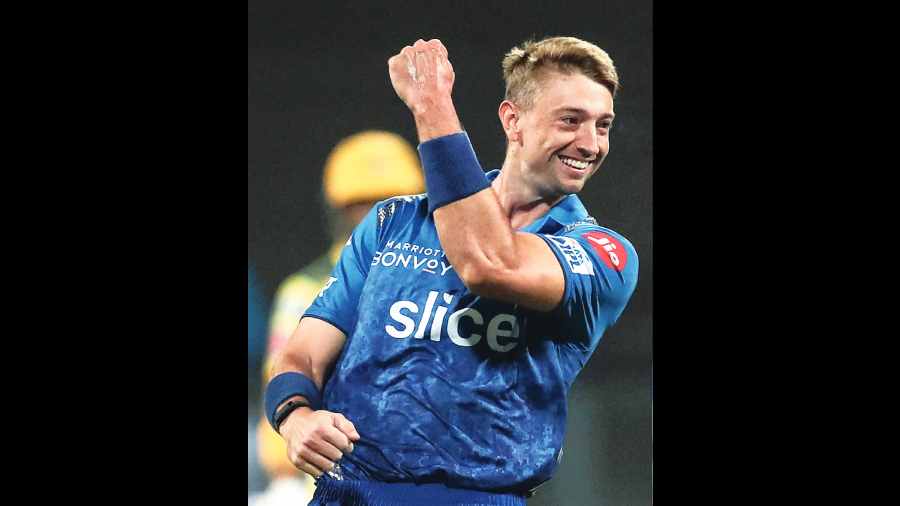 Super Kings’ hopes of keeping their playoff prospects alive suffered a massive jolt at the Wankhede in Mumbai on Thursday.

Winning the toss and opting to bowl, Mumbai Indians bundled Chennai out for a meagre total of 97 in 16 overs in a game the Mahendra Singh Dhoni-led side had to win to stay afloat in the competition. But after Chennai were three down for only five in the second over, they just couldn’t recover from such a situation.

On a track offering some movement to the quicks, left-arm pacer Daniel Sams (3/16) was the pick of the Mumbai bowlers, striking twice in the first over itself when he trapped Devon Conway lbw and then utilised the bounce to good effect that induced Moeen Ali into playing a false shot.

Captain Rohit Sharma rightly gave the second over to Jasprit Bumrah instead of bringing him later on as first change. And Bumrah responded immediately with a delivery that shaped in a little and trapped Robin Uthappa in front of off and middle stump.

The pressure was doubled on Chennai when Ruturaj Gaikwad, the other opener, was caught behind down the leg side, giving Sams his third wicket. That certainly was a shot Gaikwad could have avoided.

Jasprit Bumrah of Mumbai Indians exults after dismissing CSK’s Robin Uthappa at the Wankhede Stadium in Mumbai on Thursday.

Even pacer Riley Meredith and left-arm spinner Kumar Kartikeya chipped in with a couple of wickets each, making it more agonising for Chennai.

It was all up to the 40-year-old Dhoni (36 not out) to give some respectability to the team total.

With wickets continuously falling at the other end, all the skipper could do was try his best and take Chennai as far as possible, closer to the 100 mark.

Mumbai were wobbling at 33 for 4 in the fifth over, before Tilak Varma (12 batting) and Hrithik Shokeen (9 batting) brought about some stability to take the team total to 55 for 4 in nine overs.