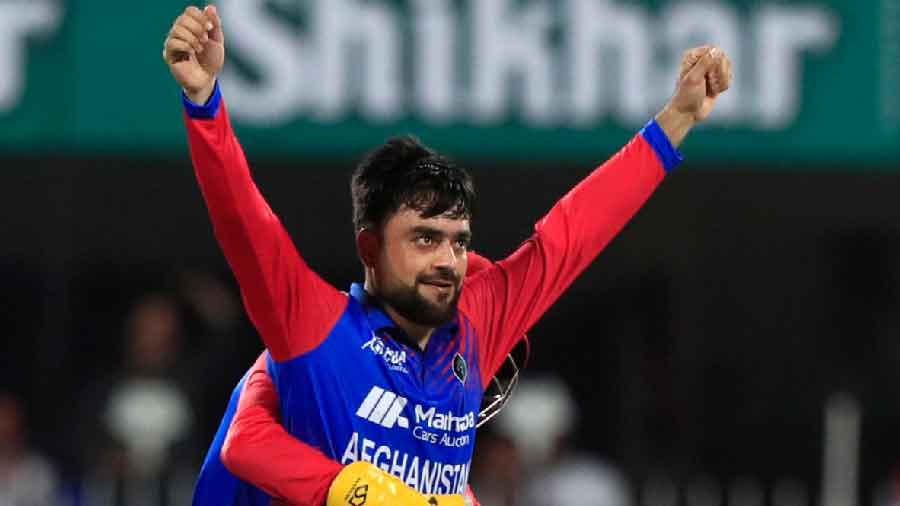 A fine performance from the spinners and an impactful cameo from Najibullah Zadran helped Afghanistan record a seven-wicket win over Bangladesh in the Asia Cup here on Tuesday.

Afghanistan's star spinners Mujeeb Ur Rahman (3/16) and Rashid Khan (3/22) ran through a reckless Bangladesh batting line-up to restrict the opposition to 127.

Bangladesh stifled Afghanistan in the run chase before Najibullah's belligerent 43 not out off 17 balls, comprising six sixes, got his team over the line in 18.3 overs.

Ibrahim Zadran also contributed with 42 off 41 balls as he shared an unbeaten 69-run stand off 36 balls with Najibullah.

With their second win in as many games, Afghanistan also became the first team to qualify for the Super 4s.

Like Bangladesh, Afghanistan too found it hard to push the scoring rate.

Skipper Shakib Al Hasan opened the bowling for Bangladesh and returned with impressive figures of 1 for 13 in four overs. The other bowlers too were accurate with Afghanistan batters not able to put them away.

After the fall of openers Hazratullah Zazai (23) and Rahmanullah Gurbaz (11), Afghanistan found themselves needing 80 off the last 10 overs.

With the batters struggling to find the big hits, it seemed the game would go down to the wire. However, a barrage of sixes from Najibullah quickly change the course of the game.

It was only fitting that the left-hander finished the game with a six.

Earlier, Mossadek Hossain (48 not out off 31 balls) was the sole Bangladesh batter who played smartly and saved Bangladesh the blushes.

It was the pacers who rocked Sri Lanka in Afghanistan's earlier match but the team's traditional strength, the spin, wreaked havoc here as Mujeeb and Rashid shared three wickets each.

The spinners had a clear plan to target the stumps and Bangladesh batters chose to play cross-batted strokes against them, leading to their downfall.

Mujeeb broke the backbone of Bangladesh batting by striking thrice in the powerplay. He used the slider effectively to get through left-handed Mohammad Naim's (6) stumps before Anamul Haque (5) went for the slog sweep only to be trapped in front of the stumps.

Mujeeb's third scalp was of opposition skipper Shakib Al Hasan (11) who played a poor shot to see his stumps dislodged.

Number one spinner Rashid then joined the party by removing the seasoned Mushfiqur Rahim (1) with a googly. He got rid of left-handed Afif Hussain (12 off 15 balls) with a leg-break, leaving Bangladesh in dire straits at 53 for five. The quick pace both the spinners bowl at did not give the batters time to free their arms.

The experienced Mahmudullah (25) and Hossain tried to stabilise the innings but the damage was already done.

Medium pacer Azamatullah Omarzai was brought into the attack in the 20th over in which he did well to concede just seven runs.