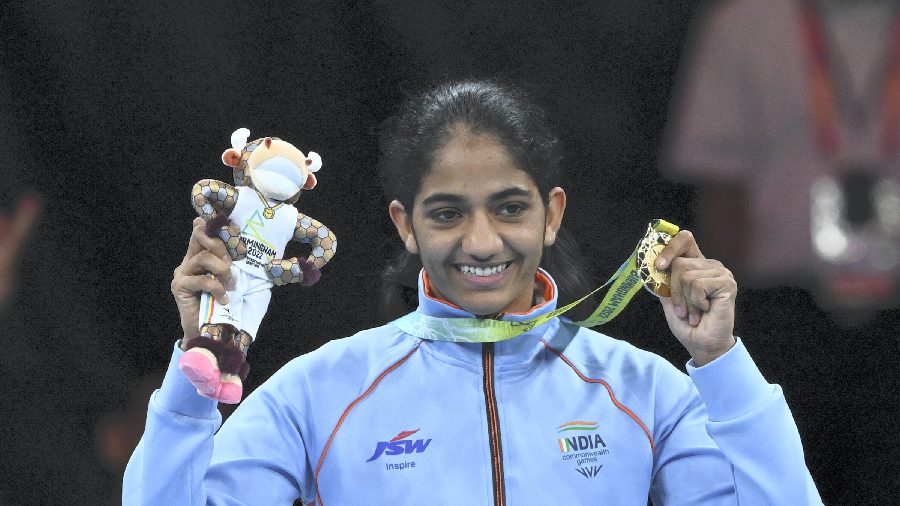 Having lost to a Briton four years ago at the same stage in Gold Coast, the 26-year-old Panghal was at his aggressive best against home favourite Kiaran MacDonald as he clinched the yellow metal with a 5-0 verdict.

The dominating Panghal, who was lightning quick with his jabs, also left MacDonald with a cut above his right eye that needed a few stitches and a stoppage in play as the Indian was on song.

Using his height advantage, MacDonald tried to bounce back in the third round but the Asian Games champion had it easy.

The turning point for Panghal, however, was the semifinal win over Zambia's Tokyo Olympian Patrick Chinyemba as the Indian bounced back to win the bout.

"It was the toughest round and was the turning point. I lost the first round and gave it all to produce the win and there was no looking back," Panghal told PTI.

Asked about his strategy against his British opponent, he said, "He was taller than me and I had to be more aggressive and get inside his arms. That worked. My coaches did a great job because we worked out how to win and I did it in the ring."

"I did enough to win the first two rounds and I held it in the last. I thought he probably won the last round but I was too far ahead by then. He was a great opponent," Panghal said.

"This has avenged my loss in Australia in the final. I knew it would be very testing because I was fighting an Englishman in England but the judges were very fair and very accurate," Panghal said.

Nitu, on the other hand, upstaged 2019 world championships bronze medallist Demie-Jade Resztan of England by a 5-0 unanimous verdict.

The first Indian boxer to take the ring, Nitu, competing in her first CWG, looked completely in control throughout the nine minutes, giving the home boxer no chance.

The atmosphere was intimidating for the 21-year-old facing the home favourite but she pinned her at first with her unwavering gaze to her eyes.

In a battle of two southpaws, the Indian who was taller than her opponent showed fluid and clever movements while stepping back to the rival's attacks.

The long-range shots being her advantage, Nitu used them to perfection to land her jabs perfectly on her opponent's face as she also won via 5-0 unanimous verdict to claim the women's minimum weight (45kg) gold.

"I am so happy, I can hardly breathe," Nitu told reporters.

Daughter of an employee in Haryana Vidhan Sabha said, Nitu, who hails from India's 'mini Cuba' in boxing Bhiwani, further said, "My parents have been my inspiration and my gold medal is for them."