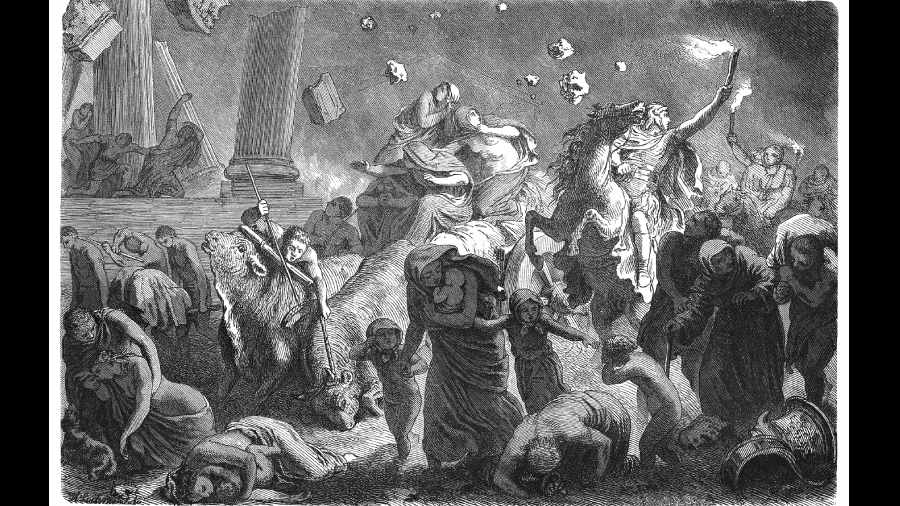 In the early 1930s, archaeologists in Pompeii made a remarkable discovery: the skeleton of a man who died during the eruption of Mount Vesuvius in 79 AD. Unearthed in the Casa del Fabbro, or House of the Blacksmith, the skeleton was found encased in pumice and reclining on what had been a wooden couch, arms folded under his head and legs stretched out on the floor.

The figure in its repose recalls the Casanova character played by Marcello Mastroianni in the 1961 film Divorce Italian Style. As embodied by Mastroianni, the ideal 20th-century Italian man, the “sciupafemmine” had a resigned air, touched by melancholy that suggested indolence and a lifetime of romantic disaster. Italian actress and writer Marta Mondelli has described him as “a solitary, charming, not necessarily beautiful, but seducing man who loves being alone almost as much as he loves women and their company.”

“In the movie, Mastroianni wants to rid the world of his dull wife, who keeps demanding for him to say he loves her,” said Fabio Macciardi, a professor of molecular psychiatry at the University of California, Irvine, US. “Fed up, he bolts out of their bedroom, prepares a couch and dreams of courting his teenage cousin. That is how I picture the Pompeii man.”

Macciardi is part of a team of geneticists and archaeologists who reported recently in the journal Scientific Reports that they had successfully sequenced the genome of this hypothetically lazy Latin lover. It was the first time that a complete stretch of mitochondrial DNA from Pompeian human or animal remains had been genetically decoded.

“The study is exciting because it shows that DNA is preserved from the towns buried by the Vesuvian eruption despite high temperatures,” said David Reich, a Harvard geneticist, who was not involved in the research.

The authors of the paper, Gabriele Scorrano, a University of Copenhagen geneticist, and Serena Viva, a University of Salento funerary archaeologist, speculate that the ash and pumice released during the blast may have provided cover from DNA-degrading environmental factors, such as atmospheric oxygen.

The idea for the project came in 2017 when anthropologist Pier Francesco Fabbri facetiously asked Macciardi and Dr Scorrano to help him sequence one of his ancient forebears, the recumbent male from the Casa del Fabbro.

“The joke is that Fabbri is the plural of Fabbro,” Macciardi said. Although excavated in the early 1930s, the skeleton remained in the dining room through the devastating earthquake of 1980. Only in 2016, during a restoration of the house, was the corpse removed for study.

Scorrano and Serena extracted DNA from the remains of the recumbent man and a woman discovered on the floor of the room, her arms clutching the edge of a couch. Between her feet was a cloth bag containing 26 silver coins. “What were they doing there?” Macciardi said. “Were they finishing a meal and caught by surprise? Were they about to go to sleep? Perhaps they were seeking refuge.”

At the time of the cataclysm, Pompeii is thought to have had a population of about 12,000. Most people escaped; only about 1,200 bodies have been recovered. A forensic analysis of the two Casa del Fabbro bodies revealed that the male was about 35 years old and the female over 50. “She may have been his mother, his aunt or his wife,” Macciardi said. Researchers targeted DNA stored in the petrous, a very dense bone that envelopes the inner ear. But they could sequence genetic material from only the male cadaver.

Comparisons of his DNA with genetic material recovered from 1,030 other ancient and 471 modern western Eurasian people suggested that his genetic makeup was most similar to ancient people living around Rome in Imperial times, in the first few centuries of the common era.

“Modern and central Italians look genetically different due to medieval events,” Reich said. “The findings are consistent with the possibility that the people of Pompeii might have been part of the same population as the people of the city of Rome, roughly 150 miles away.”

The investigators concluded that some of the Pompeii man’s ancestors were from the island of Sardinia and some from Anatolia, the Asian part of modern Turkey. This bolsters data from a previous paper that inferred that two millenniums ago the Italian peninsula was a hotbed of genetic diversity.

Why was the Pompeian male lying down? Tuberculous spondylitis, a disease of the spine also known as Pott’s disease, was detected in his DNA sequence. Common symptoms are back pain, lower limb weakness and paraplegia. “The condition would have forced him to have little mobility,” Fabbri said. “The elderly woman near him suffered from arthrosis, so she stood there waiting, protecting a small treasure of coins.”

Macciardi was unfazed by Fabbri’s diagnosis of his proto-Mastroianni. “I imagine him leisurely eating lunch while lounging on his couch, battling the ache in the back and ruminating in the old Italian style on how to eliminate his wife and marry his young cousin,” he said. “Then the volcano erupts and he’s buried in pumice.”