Was Partition itself a horror? 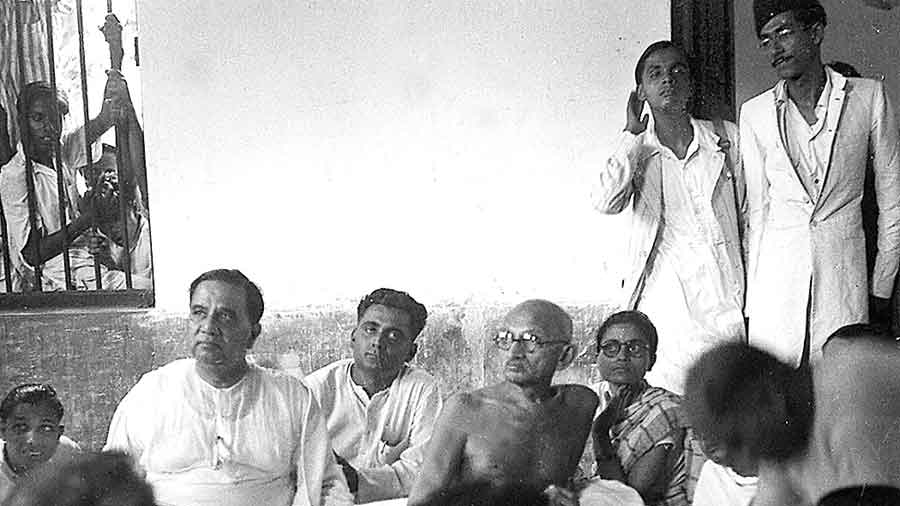 Why am I offering this reflection on that email through The Telegraph? Because Calcutta was where the first day of Independence-cum-Partition found my grandfather, Mohandas Karamchand Gandhi. Calcutta was also where, in the first week of September 1947, Gandhi fasted for fraternity among Hindus and Muslims. Again, Calcutta was where, during that same week, the young lives of Sachin Mitra and Smritish Banerjee were extinguished because they protected sisters and brothers from the ‘other’ community.
File picture
Rajmohan Gandhi   |   Published 05.09.21, 12:31 AM

“Your grandfather left us to live with termites for all the times to come.” This is what a man told me in an email after an article of mine, published on another platform, had evidently needled him. In that article, which was sparked by the prime minister’s call for a day to remember Partition’s horrors, I had asked whether Muslims were included when Narendra Modi used the words, “sisters and brothers”.

Why am I offering this reflection on that email through The Telegraph? Because Calcutta was where the first day of Independence-cum-Partition found my grandfather, Mohandas Karamchand Gandhi. Calcutta was also where, in the first week of September 1947, Gandhi fasted for fraternity among Hindus and Muslims. Again, Calcutta was where, during that same week, the young lives of Sachin Mitra and Smritish Banerjee were extinguished because they protected sisters and brothers from the ‘other’ community.

And because Calcutta is synonymous with Tagore, whose Kabuliwala has shot back into our minds following Afghanistan’s cascading events. And because Calcutta is synonymous also with Subhas Chandra Bose, whose comrades in the battle to reach Delhi with the flag of Azad Hind were Hindus, Muslims and Sikhs, and whose older brother, Sarat Bose, strove so hard to prevent the division of Bengal in 1947.

We all know that horrors accompanied the Partition. When we are honest, we also know that the horrors were all-sided. Heroism, too, showed its face in 1947. Numerous people, known and unknown, joined Sachin and Smritish in displaying humanity, whatever its risks.

Before looking at another word starting with ‘h’ that sadly permeates the sentence quoted at the start of this article, we may ask, “Was Partition itself a horror?” And a connected question: assuming that Partition was a horror, would we want the subcontinent re-unified, if that were possible?

Those seeing India as a Hindu rashtra were far fewer before August 15, 1947 than they are today, but they existed then too. Then, too, they criticized Partition, as they do today. A re-unified subcontinent controlled by Hindu nationalists may be their wish, but a re-united India where individuals are free and regions are autonomous is certainly not.

In 1947, Hindu supremacy over the entire subcontinent was a hard goal that very few pursued. Some might desire it today; most would call such a goal senseless. On the other hand, a South Asian confederation of autonomous regions and free individuals might, in theory at least, seem wise to many. In practical terms, however, the idea is quite unrealistic. Saner relations across South Asia’s existing borders is the sole sensible goal in 2021.

For Hindu supremacists, to term Partition a horror would, therefore, only be a hypocritical yell. A re-united India where individuals are free and the regions autonomous is the last thing they would want. In such a rearrangement, ‘termites’ would be swarming in even larger numbers.

I am assuming that the sender of that email is a ‘good’ man. I have no knowledge that he is ‘bad’. Although he supplies a name, I don’t know him. Sadly, hate pervades his message. I wonder if he has ever gotten to know any of the people of whom he speaks with such ill-will, contempt, and fear. If he were to look again at his remark to me, he will find that the dislike in it permits of no exception. It is genocidal in scale.

Who can help people who think and speak like this ‘good’ man? A candid rebuke from someone he respects or likes, a political leader perhaps, or a family member, might work, but going by recent history, our political leaders are not likely to offer a reprimand. As for family members, they may not be aware of his expressions. Or they may be fearful of him.

Might he listen to a guru or an exponent of Hindu texts? Perhaps, but we haven’t seen hate or bigotry denounced from any venerated Hindu platform. A solitary exception was Swami Agnivesh, who died last year.

It is the everyday citizen who has to speak up and supply the corrective. Researchers know that during the Partition horrors large numbers of ‘ordinary’ Indians on both sides bravely hid, protected, and sent to safety members of the ‘other’ community who were at risk.

This resentment that ‘they’ exist, this hate of a visible but segregated mass of the unwanted who dare to share India’s space with ‘us’, cannot be healthy. If history is any guide, this hate is bound to recoil on sections of the hater’s own community. If Muslims are the targets of today’s wrath, Hindus of another caste, maybe your caste, will be tomorrow’s victims. Pol Pot’s Cambodia, the Rwanda of 1994, the China of the Cultural Revolution, and the Balkan killings of the 1990s are only some examples of the impossibility of restricting hate to a marked community.

No, my good man. This mindless hate (a phrase that Mr Modi himself recently used) will not help you, or those you may love, or India. Moreover, if we can’t respect the humanity and autonomy of fellow Indians, what message will we have for Afghanistan — or for Myanmar?

As I think of the rich Hindu, Buddhist, Christian, and Muslim worlds served or covered by The Telegraph — including West Bengal, Assam, the rest of the Northeast, and also Bangladesh, Nepal, Bhutan, and Myanmar — the region’s multiple, oft-bitter divides also confront me. But then I recall Kabuliwala’s bond between an Afghan who sells dry fruits on Calcutta’s streets and a conservative Bengali family; the insaniyat that Sachin and Smritish painted with their blood in September 1947; the passion for Hindu-Muslim partnership that came across both from a marching Netaji and a fasting Mahatma; the qualities of present-day individuals I know across the region; and a certain election result in May of this year. My faith is renewed.