Advertisement
Home / Opinion / The reasons to be pessimistic about Indian pluralism

The reasons to be pessimistic about Indian pluralism

The Republic of India is becoming ever more a ‘Hindu’ country; in how its citizens think and feel, in how its public officials think and act, in how its major political parties canvass for votes 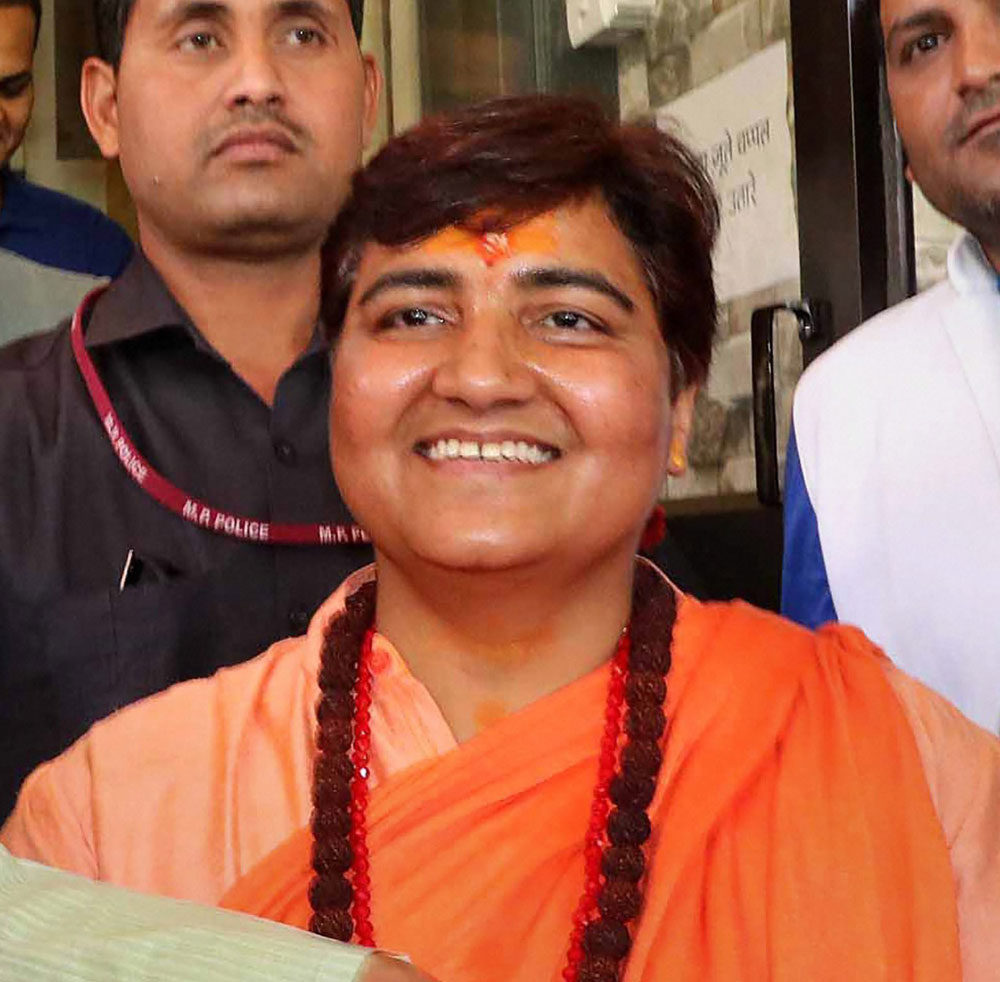 Sadhvi Pragya Singh Thakur in Bhopal on May 5, 2019. The BJP-Congress rivalry is essentially a competition for Hindu votes, which has been most starkly revealed in the fight for the Bhopal parliamentary seat
Picture by PTI
Ramachandra Guha   |   Published 11.05.19, 02:44 AM

In 2008, the political scientist, Steven Wilkinson, published an essay titled “Muslims in Post-Independence India”. This was its conclusion: “The good news for India, and for India’s 130 million Muslims, is that there are several factors likely to restrain any Hindu nationalist attempts to establish a Hindu Rashtra that will permanently turn Muslims into second-class citizens. First, opinion polls consistently show that over two-thirds of Indians reject this option, and that Indians are committed to religious pluralism. Second, India’s strong legal institutions and civil society impose real restraints on politicians’ ability to target minorities in order to stay in power. Third, a broad increase in electoral volatility and competitiveness since the early 1980s is working in Muslims’ favour, because a higher level of party competition leads to more competition for Muslims’ votes.”

If a week is a long time in politics, a decade is an eternity in the life of a nation. Professor Wilkinson, writing in 2008, was optimistic about the survival and flourishing of India’s pluralistic ethos. Writing in 2019, it is impossible to be at all sanguine in this regard.

The first reason to be pessimistic about Indian pluralism is that history teaches us that once it controls the levers of State power, a determined and focused minority can always overcome a weak and vacillating majority. That was true in Russia after 1917, when Lenin and Stalin imposed Bolshevik brutality on a population that did not want it. That was true in Germany after 1933 as well. In India, where the Bharatiya Janata Party had the added legitimacy of winning a parliamentary election (albeit with 31 per cent of the vote), it has since 2014 determinedly pursued an agenda of Hindu pride and Hindu supremacy.

The past few years have witnessed an awful coarsening of public discourse in India. The editor, Siddharth Varadarajan, has written feelingly of how Hindu communalists have pumped “raw sewage into the veins” of the nation; by vilifying, threatening, and attacking those Indians who do not subscribe to their views. The reporter, M.N. Parth, travelling through rural North India in the run-up to the general elections, found an unreasoning Islamophobia among many Hindus. “The BJP’s insanely effective and penetrative social media machinery,” wrote Parth, “has successfully sold the persecution complex to the majority and made them insecure and paranoid.” As he further observed: “My most disquieting observation from the ground is how okay the overwhelming majority of Hindus are with the persecution of Muslims, including some of the ghastliest cases of lynchings. Not everybody wants a Muslim lynched, but not many are bothered about it either.”

The second reason to be pessimistic about Indian pluralism is that our legal institutions are not as robust as one may wish them to be (or as Professor Wilkinson, back in 2008, thought them to be). The police in several states of northern India are utterly compromised; that is to say, thoroughly communalized. When MLAs, MPs, and even Union ministers openly felicitate alleged lynchers, it is hard for the police or even the lower courts to act quickly and impartially in the interest of justice. In this climate, few, too few, killers of innocent Muslims have been brought to trial and punished for their crimes.

The third reason to be pessimistic about Indian pluralism is that at least as far as our two national parties go, it is no longer the case that ‘a higher level of party competition leads to more competition for Muslims’ votes’. In 2014, Narendra Modi’s slogan of ‘Sabka Saath, Sabka Vikas’ was, at least in theory, an appeal for votes from Muslims as well as Hindus. But the BJP’s 2019 campaign has been exclusively targeted at placating the Hindu majority and seeking their votes by stoking their fears and insecurities. Hence Amit Shah’s characterization of Muslims as “termites”, Yogi Adityanath’s avowal of Bajrangbali against Ali, and Modi’s astonishing allegation that in West Bengal, a Hindu cannot even chant ‘Jai Sri Ram’.

Meanwhile, the Congress has increasingly recast itself as a ‘Hindu’ party as well. Thus Rahul Gandhi’s proclamation that he is a Shiv bhakt and a janeudhari Hindu, thus also the gaushalas promised by newly-elected Congress governments in North India. That the BJP-Congress rivalry is essentially a competition for Hindu votes has been most starkly revealed in the fight for the Bhopal parliamentary seat when, after the BJP nominated the Hindutva firebrand, Pragya Singh Thakur, the Congress candidate, Digvijaya Singh, proclaimed that he had no less than seven temples in his own home, four of which had an eternal flame. Sundry babas were called in by him to perform havans and speak at Congress rallies. When he could have spoken of his record as a long-time legislator and two-time chief minister, and contrasted this with his opponent’s utter lack of administrative experience, Singh instead panicked at the sight of her saffron robes and sought to show only that he was even more of a ‘devout’ Hindu than she was.

Digvijay Singh along with Computer Baba in Bhopal on May 07, 2019. The Congress candidate for the Bhopal Lok Sabha seat proclaimed that he had no less than seven temples in his own home
Picture by PTI

When India became independent in August 1947, and the Congress assumed the reins of office, the party of Mahatma Gandhi promised equal rights to Muslims as well as Hindus. Its aims and objectives were most eloquently stated in a letter that Prime Minister Jawaharlal Nehru wrote to chief ministers of states in October 1947. Here Nehru remarked: “I know there is a certain amount of feeling in the country... that the Central Government has somehow or other been weak and following a policy of appeasement towards Muslims. This, of course, is complete nonsense. There is no question of weakness or appeasement. We have a Muslim minority who are so large in numbers that they cannot, even if they want to, go anywhere else. They have got to live in India. That is a basic fact about which there can be no argument. Whatever the provocation from Pakistan and whatever the indignities and horrors inflicted on non-Muslims there, we have got to deal with this minority in a civilized manner. We must give them security and the rights of citizens in a democratic State.”

India, in other words, was not to be a Hindu Pakistan. Even if Pakistan treated its Hindus as second-class citizens, India would treat its Muslims as equal in all respects. That is what Nehru held the Congress credo to be. However, the charge that the Congress was in fact ‘following a policy of appeasement towards Muslims’ never went away. It gathered salience through Nehru’s own later failure to bring about the uniform civil code promised by the Constitution, through Indira Gandhi’s periodic appeals to imams to ask their flock to vote for the Congress, through Rajiv Gandhi’s capitulation to the mullahs in the Shah Bano case, through Manmohan Singh’s statement that religious minorities — rather than women, or the poor in general — had ‘the first claim’ on the nation’s resources.

Acts such as these allowed its main rival, the BJP, to paint the Congress as a party of minority appeasement. The charge stuck; and after its utter rout in the 2014 general elections, the Congress has worked overtime to shed that label. Indeed, it has gone to the other extreme; it now wants to present itself as being as much of a Hindu-first party as the BJP itself.

And so the Republic of India is becoming ever more a ‘Hindu’ country; in how its citizens think and feel, in how its public officials think and act, in how its major political parties canvass for votes and fight elections. Little wonder that there is now a palpable fear and insecurity among those Indians who are not themselves Hindus by birth or upbringing. The constitutional commitment to pluralism is still intact; but on the ground, and in everyday life, majoritarianism rules. India is not yet a Hindu Pakistan; yet it is closer to being so than at any time since its founding.