The power of satire

Jokes at the expense of Jio 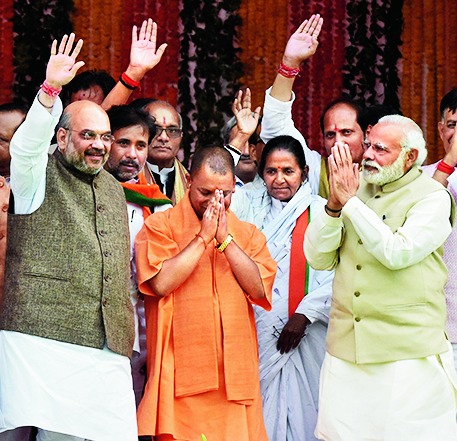 Milan Kundera once spoke of the importance, for subjects of a totalitarian regime, of 'the struggle of memory against forgetting.' As important, to the citizens of a (professedly) democratic regime, is the struggle of satire against power. Rahul Gandhi has been the butt of jokes ever since he entered politics, and, more recently, Narendra Modi has found himself mocked in private, on social media, and in print. His frequent references to himself in the third person, the astonishing suit with his name on it which he wore when meeting Barack Obama, and his tendency to clasp foreign leaders in close, crippling hugs have all attracted a flood of jokes, both visual and verbal.

Politicians are, of course, not the only powerful people in India today. Billionaires are as influential and important in directing the life of our republic; for in so far as they fund politicians, they direct (and misdirect) the process of governance (and misgovernance) as well. In the early decades of our republic, tycoons and plutocrats tended to exercise their power from behind the scenes. In recent years, however, they have come out in the open, flaunting their wealth and their proximity to chief ministers and prime ministers. So, like our netas, they have become the target of ridicule as well.

Perhaps the first business tycoon to be satirized in public was Vijay Mallya, because of his luxurious lifestyle and his absurd insistence on TV anchors calling him 'Dr Mallya' since he had obtained an honorary doctorate from a less-than-honourable university for contributions to something other than scholarship. Jokes about Dr Mallya gathered pace after his luxury airline collapsed and he threw lavish parties while his unpaid staff members drove themselves to distraction and occasionally to death.

Vijay Mallya is now in flight from his country and from the law. His ignominy is well deserved. However, more interesting to this writer is the recent emergence as the object of satire of a couple who live in India and run some of our most profitable companies. Like Mallya, they like to tell the world, and tell it again, how rich and famous they are. And since their wealth is many times his, they can boast about themselves in more varied and extravagant ways.

I am not by profession a chronicler of the super-rich, but my sense is that jokes about Mukesh and Nita Ambani first began to emerge after they built that charming little house for themselves and their three children. Five Indians apparently needed twenty-seven storeys for their daily use, which included four floors for their cars, a couple for their home theatre, and a couple more for their staff, leaving a mere nineteen floors of space for their clothes, their jewels, and their furniture.

The jokes about the house began with the name (the 'Mother of all Anthills' was one) and ranged further and became funnier. The targets were undeterred; their desire to be the most-talked-about couple in India was undimmed. Newspapers and magazines in awe of their wealth (and perhaps of their advertising power) began to carry flattering profiles and cover stories on them.

In the last few years, however, social media has emerged as an important means of communication, and those who use it do not depend on advertising revenue. Some months ago, a delightful video began circulating on WhatsApp about a speech made by one of the Ambani scions. Though the speech was astonishingly bad, the mother was overwhelmed with its eloquence, giving it a series of standing ovations. Beside her was the chief guest, Amitabh Bachchan, who sat stoically on, disgust and weariness writ large on his face. As the son of a famous poet, he could tell that the words were commonplace; and as a celebrated orator himself, that the delivery was worse than commonplace.

Several stories on the farce were pulled down when the displeasure of the First Family of Indian Business was communicated to the editors who had printed them. Snippets continue to circulate on social media, as does an Ambani wedding invitation whose sheer hideousness evoked more ridicule. However, as pieces of roasting, these were mere trailers compared to what has ensued after the Government of India bestowed the tag of 'Institution of Eminence' on a fictitious entity, which barely existed on paper even, albeit with the altogether inspirational name (for a 'world-class university') of 'Jio Institute'.

When the news of the government's partiality towards Jio first emerged, intellectuals such as myself were outraged. We issued angry tweets and wrote learned articles, pointing out that it was existing private universities such as Ashoka and APU that better deserved the 'Eminence' tag, while even in the so-called 'greenfield category', the Krea University (promoted by, among others, Raghuram Rajan, Kiran Mazumdar-Shaw and Anand Mahindra) seemed far more worthy of endorsement from the Narendra Modi government.

Our efforts were well-intended, yet soon eclipsed by a more innovative response, in the shape of a Twitter handle that was created within hours - if not minutes - of the government's announcement. The handle was called 'Jio Institute', although it had nothing, officially, to do with the proposed university which hopes one day to bear that name. Rather, it was run by a group of anonymous satirists, seeking to make fun of this latest vanity project of India's Pre-eminent Power Couple.

'Jio Institute' appeared soon on my own timeline, and from the first tweet I saw I knew I had to follow it. Some tweets were savage, aimed at the prime minister and his perceived closeness to the promoters of this Fantasy University. So we had one tweet with Narendra Modi and Mukesh Ambani together, both clad in the robes of a university convocation, and a second tweet offering degrees in 'Entire Political Science'. Other tweets were more wicked. They included: 'We have a Zero PhD plan for students who want to Pursue PhD in nothing. Thesis will be written on WhatsApp'; 'Jio institute prides itself in that you can't even find it on Google'; 'Our campus is free from any type of Discrimination, because there is no Campus.'

This Twitter handle has attracted 20,000 followers within a week. Meanwhile, other Indians have joined this raucous, rollicking party. One widely circulated WhatsApp forward said the new university would offer courses in 'Jiopolitics, Jiography, Jiometry, Jiology, Jiornalism, Jingoism...' And when I went to a YouTube recording of an academic discussion on the controversy, I found dozens of comments below it, criticizing the HRD ministry's manifest partiality to an industrial house with absolutely no track record in the field of education. Some commentators were angry and hurt, others simply satirical. A sample follows: 'I think in JIO institute every student will get their result before appearing for any exam.'

'Next. "Entire political science" which only Modi studied will be declared the degree of eminence.'

'I want a student of excellence award for my baby. P.S. my baby isn't born yet but he/she will be born one day and he/she is going to be the best.'

'Next year, Ambani will be awarded the Shaurya Chakra for fighting enemies of India barehandedly in the India-Pak border conflict of 2028.'

Meanwhile, a comment on the scandal in a website read: "I think the government should also start recognising 'Potential Industrial Leadership in 2050' and appoint an expert committee... Naturally, the award will go to the yet-to-be-born great-grandson from the Reliance family."

The sarkari certificate awarded to this hypothetical university is wholly undeserved on academic grounds, and the 'Empowered Expert Committee' that made the decision has attracted a great deal of criticism. Without withdrawing the criticism, we might nonetheless offer this Committee a note of thanks for so richly contributing to the stock of laughter in the life of our republic.