POLITICS AND PLAY | The moral evolution of Mohandas K. Gandhi 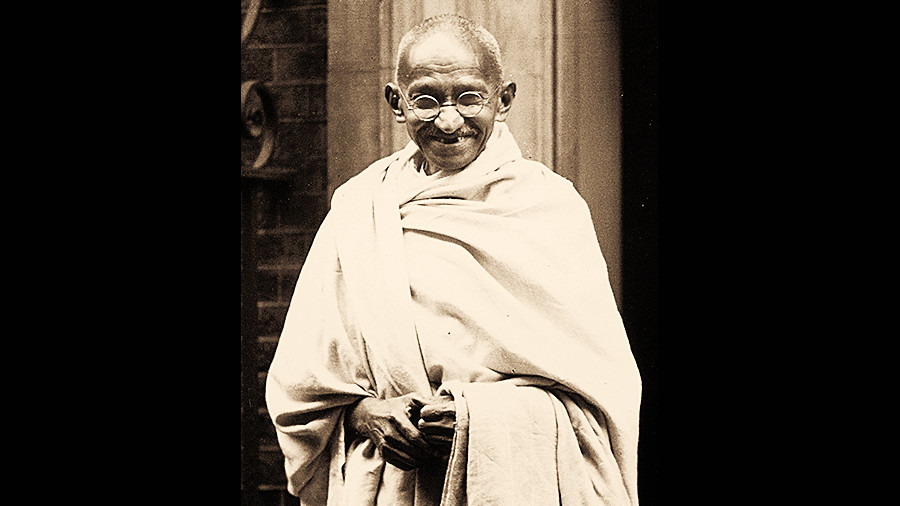 The American writer, Louis Fischer, is best known for his book, The Life of Mahatma Gandhi, which Richard Attenborough drew upon while making his award-winning film of 1982. Fischer’s book was published in 1950, two years after Gandhi’s assassination. Eight years previously, he had written a much slimmer (and now far less well known) volume titled A Week with Gandhi. This was based on a visit Fischer made to India in the summer of 1942, in the course of which he had conversations with Ambedkar, Savarkar and Jinnah in the great city of Bombay, before travelling to Sevagram to speak with that village’s most famous resident. In a striking passage in this book, Fischer wrote: “[Jinnah] talked at me. He was trying to convince me. When I put a question to him I felt as though it had turned on a phonograph record. I had heard it all before or could have read it in the literature he gave me. But when I asked Gandhi something I felt that I had started a creative process. I could see and hear his mind work. With Jinnah I could only hear the needle scratch the phonograph record... But I could follow Gandhi as he moved to a conclusion. He is, therefore, much more exciting [for an interviewer] than Jinnah. If you strike right with Gandhi you open a new pocket of thought. An interview with him is a voyage of discovery, and he himself is sometimes surprised at the things he says.”

This ability to listen and learn, this willingness to change his views if confronted with contrary evidence, emphatically set Gandhi apart from the other politicians of his time, as well as of ours. He was constantly questioning his own presuppositions, while constantly engaging with his colleagues and his critics. Consider in this regard Gandhi’s views on race, caste, and gender. In each of these domains, over the course of his life, Gandhi discarded the reactionary prejudices he once held to embrace more egalitarian positions.

Racism runs deep in Indian culture, as manifest in the still widespread tendency among males to look for brides with ‘fair complexion’. Growing up in Kathiawar, Gandhi had unquestionably accepted racial stereotypes. That is why, in his early years in South Africa, he made a series of disparaging comments about Africans whom he saw as distinctly inferior to his fellow Indians. Over time, however, Gandhi came to see Africans in a far less pejorative light, thus to hope — as he put it in a public speech in Johannesburg in 1908 — that “all the different races [would] commingle and produce a civilisation that perhaps the world has not yet seen”.

By the end of his stay in South Africa, Gandhi had moved from being a racist to becoming a non-racist. His views were to evolve further. In the last decades of his life, he was a principled and consistent anti-racist. He was in touch with African-American activists, hosting them in his ashram in Sevagram, while urging that they adopt non-violent satyagraha to combat racial prejudice in their country, as indeed they went on to do. So long as he was living in South Africa, Gandhi had kept the struggle of Indians separate from that of the Africans themselves. But in retrospect he came to see this as unwise. When a delegation of Indians from South Africa visited him in 1946, Gandhi told them they must “associate with Zulus and Bantus” too. The “slogan today,” remarked Gandhi, “is no longer ‘Asia for the Asiatics’ or ‘Africa for the Africans’ but the unity of all the exploited races of the earth.”

In his autobiography, Gandhi talks of defying his Modh Bania community to travel overseas. However, a broader understanding of caste discrimination eluded Gandhi until his return to his homeland in 1915. Travelling around South India, he was dismayed by the ill-treatment of Dalits. He resolved to oppose untouchability, although at this stage he was reluctant to mount a direct challenge to the caste system itself. In the 1920s, inspired by the followers of the remarkable social reformer, Narayana Guru, Gandhi lent his influence to a campaign for temple-entry, mobilizing Dalits and caste Hindus to worship together. In the 1930s, provoked and challenged by the great emancipator of the Dalits, B.R. Ambedkar, Gandhi began to adopt more radical positions. He now advocated affirmative action, inter-dining and, finally, marriages between Savarnas and Dalits. Through his engagement with critics and on the basis of his own experiences, Gandhi came to recognize that as a system of separation, segregation and discrimination, caste had no reason to exist at all.

Over the course of his life, Gandhi comprehensively shed the racial and caste prejudices of his youth. His moral evolution with regard to gender was less complete. Nonetheless, it was not insubstantial. In his domestic life, Gandhi was a typical Hindu patriarch. He might have remained that way in public too had he not encountered two independent-minded European women in South Africa. These were Millie Graham, the wife of Gandhi’s friend and housemate, Henry Polak, and Sonja Schlesin, who worked with Gandhi in his law office. Accustomed to seeing women as submissive and subordinate, it was while sharing a home with Millie and an office with Sonja that Gandhi came face to face with women as autonomous moral and social agents. These experiences led to Indian women (among them Kasturba herself) participating in a major satyagraha that Gandhi organized in 1913.

After his return to India, Gandhi was at first inclined to keep women away from nationalist politics, fearing that a deeply conservative society would react with hostility to males and females coming together in the public sphere. Again, two exemplary women encouraged him to adopt a more progressive stance. These were Sarojini Naidu and Kamaladevi Chattopadhyay. Naidu became president of the Indian National Congress in 1925 at a time when there were no women in leadership roles in the political parties of Europe and North America. Chattopadhyay played a prominent part in the Salt Satyagraha. Later, during the Quit India movement of 1942, hundreds of female activists, many of a socialist bent, led strikes and protests and spent time in jail. In the event, female participation in the Gandhian movement was far more widespread than in any other anti-colonial struggle in Asia or Africa.

Race, caste, and gender are three fundamental axes of social discrimination. That is why I have focused on them here, tracking the evolution of Gandhi’s views in this regard. Yet he was continually learning and growing in other spheres as well. Take, for example, his attitude to science and technology. In his 1909 book, Hind Swaraj, Gandhi comes across as a Luddite technophobe. However, he was to substantially modify his views in later years. Two successful operations conducted on him by surgeons — one Indian, the other European — put paid to his once dogged hostility to modern medicine. Encounters with scientists like C.V. Raman encouraged a healthy appreciation of the methods and procedures of modern science. It was surely not an accident that he titled his autobiography, “The Story of My Experiments with Truth”.

Gandhi was experimenting with truth while he was on the train and when he was in the ashram, when he was by himself and while he was in conversation with others. Louis Fischer, writing in 1942, thought that the capacity for self-examination and self-critique that was such a hallmark of Gandhi’s character was conspicuously missing in his most celebrated rival, his fellow Gujarati, Muhammad Ali Jinnah. Writing in 2021, I might say that it is also conspicuously missing in the most powerful Indian now alive, Gandhi’s fellow Gujarati, Narendra Modi.

In his little book of 1942, Louis Fischer observed that “[p]art of the pleasure” of interviewing Gandhi was that “he really opens his mind and allows the interviewer to see how the machine inside works”. In this regard, Gandhi was quite unlike other Indian politicians who sought to “bring their ideas out in final perfect form so that they are least exposed to attack”. Fischer was writing as a journalist who spoke to his subjects in person. However, for the historian, whose work rests on interrogating documents (both printed and unpublished), this is among the greatest pleasures of studying Gandhi as well. In his words and actions, there was no propaganda, no subterfuge, no covering up of tracks, no spin, no attempt to present oneself in a flattering light. Reading Gandhi, researching Gandhi, is to encounter a human being whom his followers claimed to be pure and perfect, a Mahatma even, but who knew himself to be fallible and flawed.