Poison in the air

The love of spreading fear 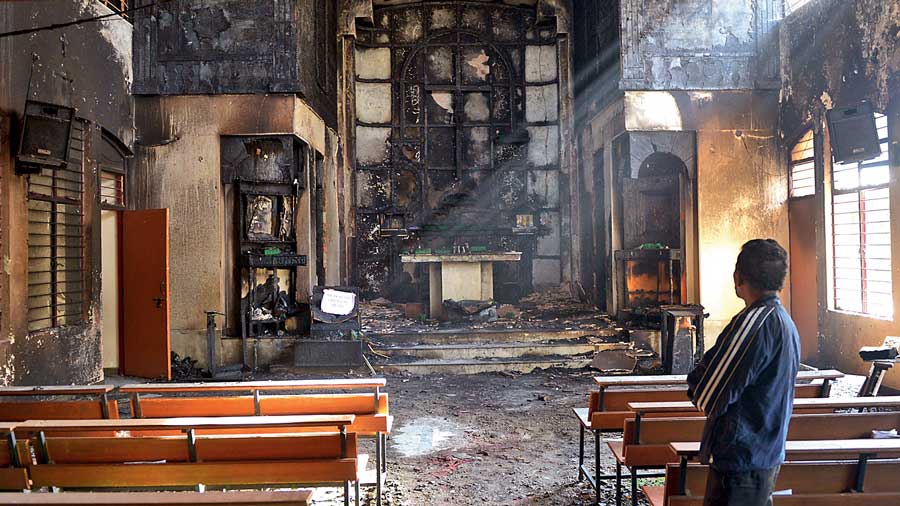 It will be Christmas soon. Jingle bells will ring out soon. The festival of the birth of innocence will be in the air. Soon shall be recited the commandment, ‘Love thy neighbour as thyself’. Soon shall Indians hear greetings issued from the Rashtrapati Bhavan to Christians in India. The photographs of the prime minister meeting the pope would, undoubtedly, be circulated on WhatsApp.

However, the Karnataka government will soon move the anti-conversion bill in the state assembly. Just as malls, halls and prayer houses are getting ready to remember the prophet of compassion and forgiveness, preparations are on in Karnataka to bring in the legislation. The government is keen on having it passed before Christmas. In a report compiled by the Association for Protection of Civil Rights, the United Christian Forum and a civil society organization, United Against Hate, that covers attacks on Christians and their places of worship for the period of January to September 2021, Karnataka was ranked at the top in South India and third in the country. These attacks typically begin with a rumour of forced conversion, followed by hooliganism at a place of worship where an inactive police force is in full attendance, denial of any conversion by the persons attacked, and no action against the miscreants by the law-keepers. These incidents end with a minor mention in the media, followed by silence from citizens, and a general lack of awareness regarding religious freedoms granted to citizens by the Constitution.

The sprawling propaganda machinery of the Rashtriya Swayamsevak Sangh, the Bharatiya Janata Party and their numerous outfits may spread false stories of how the Christian population has been increasingly posing a threat to Hindus. One has seen this happening when attacks were mounted on places of prayer in Gujarat during the first term of Narendra Modi as chief minister. One of those vandalized places was in Dang, a tribal district in south Gujarat. It was no more than a small hut with walls made of bamboo. The tribal communities — Kunknas, Varlis, Dodiyas and Dangis — had no emotional or theological connection with sanatan Hindu dharma. The missionaries working there were genuinely interested in providing education and healthcare to the people whose traditional forest rights had been vastly compromised by timber sharks. Yet, newspapers in Ahmedabad and Surat had described the attack in reports laced with innuendoes hinting at evangelism.

Of course, when the legislation gets passed in the Karnataka assembly, not everyone who reads the news will accept the false fear, justifying it on face value. Some, indeed, will try to find out if the fear matches facts and figures. For their sake, let me mention that as per census data, the population of Christians in Karnataka was 1.91 per cent
of the total population of the state in 2001. A decade later, in 2011, it stood at 1.87 per cent, slightly lower than the previous figure. In absolute figures, it was 10.09 lakh in 2001 and 11.42 lakh in 2011, an increase of 1 lakh 33 thousand but reduced in proportion to the total population figure. The conclusion is that Christians have not added to their population over that 10-year period as much as others.

What the census offers is a factually correct count. However, there is another website that comes up when one starts looking for data. It has on its masthead the image of the Vidhana Soudha, the assembly of Karnataka, giving it the look of an official government website. It mentions, “According to the Census of 2011, the population of Karnataka is 83 percent Hindus, 12.2 percent Muslims, 3.1 percent Christians, 0.8 percent Jains, 0.7 percent Buddhist and less than 0.1 percent Sikhs.” So what the census data offer as 1.87 per cent is shown in this website as 3.1 per cent. If one has the curiosity to find out who put up this government-like website, a search would show that it was done by an individual who was the founder of a digital media set-up handling Narendra Modi’s election campaign in 2014. The spread of falsehood, dressing it up as semi-official information, is what one understands by the term, ‘fake news’. Surely, the chief minister of Karnataka and his bureaucracy know that the legislation has no justification either in demography or in the Constitution. They also know that the legislation will have adverse effects on the reputation of the state, which has so far attracted investments and business to Bangalore. Similar anti-conversion legislations were passed in Gujarat, Uttar Pradesh and Madhya Pradesh. A bad precedent, despite it being a precedent, is a bad precedent.

The question is this: why is the RSS-BJP and its various fronts keen on going against the tenets of the Constitution, business interests, and the principles of civility that democracy cherishes? Why does the presence of a miniscule minority population get state government after state government worried about the health of faith and prayer traditions of the majority community? The truth is that the Hindutva brigade has hardly anything to do with either the profound wisdom in the thought-traditions that make India a civilization or the need for internal social reforms that caste and gender injustice calls for. None of the schools of thought or the sect philosophies of Indian tradition preaches or promotes hatred, scorn and discrimination. The constant harassment of religious minorities and deprived castes and tribes springs from the RSS-BJP’s need to keep the multitude of castes and communities bundled together as ‘Hindu’ in fear of those in power. Legislations and fake news directed against minorities are the means of sending signals to the followers of Hindutva for maximizing electoral returns. The mass psychology of fascism thinks of intimidation of a few as a weapon for keeping the masses tethered to an ideology of hatred. Love is a word that frightens fascism. It is quick to equate it with jihad, for fascism is birthed in hatred; fascism thrives in hatred.

How can one then wish ‘Merry Christmas’ and a ‘Happy New Year’?