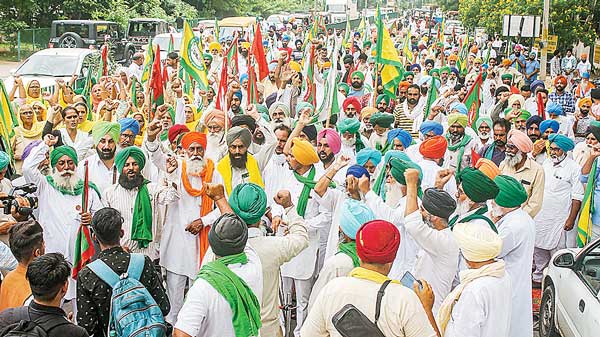 Real life has a way of surprising theory. One of the most intensely discussed theoretical questions on the Left has been how to bring agricultural labourers and peasants, including well-to-do peasants, together in a common struggle against landlord domination in India’s countryside. Numerous Marxist gatherings have for years discussed the contradiction between peasants and labourers holding up a decisive resolution of the contradiction between the landlords and the rest of the village.Whenever Left peasant organizations have participated in joint struggles with other, non-Left, peasant organizations, they have insisted on incorporating some demands of agricultural labourers to bring the latter into the fold; but it has not worked.

The contradiction between peasants and labourers is not just economic — with the labourers’ desire for higher wages directly affecting the peasantry — it also has a caste dimension. The labourers belong mainly, though not exclusively, to the Dalit castes, while the peasants are typically non-Dalit; in fact, over large swathes of India, especially the North, Dalits were traditionally not allowed to own any land.

In the surroundings of Delhi, this contradiction took the form of an acute Jat-Dalit contradiction. In fact, a village called Kanjhawala near Delhi had witnessed in the 1970s a prolonged face-off between the Jat peasantry and the Dalit agricultural labourers organized by the Communist Party of India over wage demands. This confrontation had been an object lesson on the problems confronting the Indian revolution.

The current struggle of the peasants against the three farm laws enacted by the Narendra Modi government, however, has done the seemingly impossible; it has brought together peasants and agricultural labourers on a common platform. In fact, the organizers of the kisan mahapanchayat held in Muzaffarnagar on September 5 claimed with pride that the attendance at the venue showed the agitation enjoying the support of ‘all classes’, ‘all castes’ and ‘all religions’. The Bharat Bandh on September 27 received support from the Bahujan Samaj Party despite that party’s going-it-alone proclivity which indicates massive churning at the ground level.

This churning is not confined only to relations between peasants and labourers, or Jats and Dalits. It is visible in at least two other ways. One is the mass participation of women in the struggle. Jat peasant women, though proverbially feisty individually, are also, traditionally, victims of patriarchal attitudes; their participating on a large-scale in mass gatherings and mass meetings constitutes a novel and unprecedented phenomenon.

The other is the relation between Jats and Muslims of the region. This had been relatively cordial in the past, but had soured allegedly at the behest of the current ruling party in the run-up to the parliamentary elections in 2014. A mahapanchayat had been held in Muzaffarnagar in August 2013 over some communal incident that had an unfortunate fall-out in the form of large-scale riots. This polarized the population along communal lines and not only made the Bharatiya Janata Party the single largest party but also gave it an absolute majority. The peasant struggle has brought the two communities together, each promising not to repeat the mistake of the last seven years.

Quite apart from its effect on caste, community and gender relations, the peasant struggle has been remarkable for lending support to a range of pressing democratic issues not directly connected with the peasants’ own demands. Thus, opposing the government’s proposed ‘monetization’ drive, the privatization of public sector assets, the attack on civil liberties, the use of State agencies like the Enforcement Directorate and the Central Bureau of Investigation to intimidate opponents and critics and the continued incarceration without trial of a large number of people, including the Bhima-Koregaon accused, the kisan movement has broken completely new ground. No kisan struggle in the past had been as comprehensive as the current one as regards to the democratic issues it has taken up for the country as a whole.

This sort of Promethean role, according to Marxist theory, is supposed to be played by the working class, with the peasantry remaining, at best, an ally of the workers, but never by the peasantry on its own. It is often argued that when the peasantry leads the anti-colonial struggle, it lacks any clear idea of the society that should be built after the end of colonial rule; but here we have the peasantry defending secularism, democracy and the Constitution against attempts to subvert them. In these attempts, segments of the urban middle class, whom John Maynard Keynes had called the “educated bourgeoisie” and placed great faith in as the element that would make the State an embodiment of reason, are ironically complicit.

How is it that a class often dismissed as embodying the “idiocy of rural life” suddenly finds itself ahead of more ‘progressive’ social classes in defending democracy and constitutional values? A part of the answer lies no doubt in the changed circumstances in which this class finds itself. In the era of monopoly capitalism, there is an assault by monopoly capital on petty production, including peasant agriculture, so that the peasants have to fight not just landlordism as before but also the monopoly capitalists, the most ‘advanced’ section of society.

In India, this exposure of peasant agriculture to encroachment by monopoly capital acquired momentum with the introduction of neoliberal policies. Earlier, under the dirigiste regime, the State had protected peasant agriculture from encroachment by monopoly capital. But this protection ended with neoliberalism: agricultural input subsidies were cut, price support withdrawn on cash crops, and institutional credit denied. The consequent decline in profitability and growth of indebtedness drove lakhs of peasants to suicide.

Whatever residual protection is still offered by the State, through price-support for foodgrains, is now being denied through the three farm laws. The peasants are forced to rise above themselves to fight their new, ‘sophisticated’ enemy, consisting of domestic monopolists and international agri-business.

The other part of the answer lies in the struggle itself, which revolutionizes peasants’ attitudes, getting rid of old casteist, communal and patriarchal prejudices. And what a struggle it has been!