POLITICS AND PLAY | The exemplary Indian 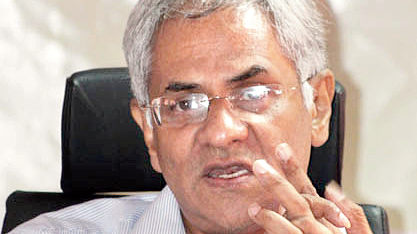 Perhaps because my own life has largely been devoted to the pursuit of personal success, I have always felt a guilty veneration for those who live for others. The public servant I most admired died on Sunday, September 5, aged sixty-six. In these times, this may seem too early to go (particularly as he was not a victim of Covid-19) and he had contributions to make to society and scholarship yet. But given all that he did, and the manner of its doing, I wish not to mourn his premature passing but to celebrate a life that was exemplary in all respects.

I first met Keshav Desiraju in the year 1988. I had heard of him from mutual friends in Uttarakhand who marvelled at how this native Telugu speaker and graduate of Cambridge University had so endeared himself to the people of the hills. He was then district magistrate of Almora, serving in an area that I had written about in my own research. I went to see him at work, noting with interest the fluency of his Hindi, his zest for long treks into the interior, and his deep understanding of the challenges of sustainable development in the mountains.

When Uttar Pradesh was bifurcated, Keshav chose to join the Uttarakhand cadre of the Indian Administrative Service. Since I was born and raised in Dehradun, his being there was an incentive to visit the new state often. I remember with particular fondness a drive to the soon-to-be-abandoned town of Tehri, calling on the way at the place where Sunderlal Bahuguna had fasted against the Tehri dam, and on the way back at one of the last contiguous stretches of blue pine forest in the Garhwal Himalaya. In Dehradun itself, I witnessed the enormous regard in which Desiraju was held in the secretariat, as an officer who almost uniquely combined domain knowledge, personal probity, and an absolute lack of hierarchy in his dealings with others.

In 1998, Keshav and I went on a trip to the tribal areas of Madhya Pradesh, visiting the villages the anthropologist, Verrier Elwin, had worked in. On our last night, we had dinner in a roadside bhojnalaya in Amarkantak where, while reading a Hindi newspaper a previous customer had left behind, Keshav heard that M.S. Subbulakshmi had been awarded the Bharat Ratna. On the long train ride back from Anuppur to Delhi, he told me about every M.S. concert he had attended (the first being at Mumbai’s Shanmukhananda Hall when he was eight), with near-perfect recall of every composition he had heard her sing.

After several years in Uttarakhand, Desiraju was posted to Delhi as additional secretary in the ministry of health. Here he did outstanding work in the campaign to eradicate polio and for the rights of people with disabilities and, after he was elevated to the position of secretary, on expanding the provision of mental healthcare in the country. He sought, heroically, to take on the corrupt cabal that ran the Medical Council of India, which had many influential politicians in its pocket. This campaign, as well as his opposition to the tobacco lobby, led to this remarkable officer being shifted away from the health ministry by the UPA government then in power. For a general election was around the corner, and an upright secretary was an impediment to the collection of funds via illegal means.

Over the years, senior civil servants in India have become increasingly known for their arrogance, their capacity for ingratiating themselves with their political masters, and their lack of a moral compass. Keshav Desiraju lacked these attributes entirely. Which may be why, unlike so many of his colleagues, he was held in such high regard by the people he was mandated to serve. Like his predecessor, K. Sujatha Rao, he was that rare health secretary who was enormously respected by doctors, medical school professors, and community health workers. His transfer by the UPA government evoked strong public condemnation from health professionals across the country.

As Keshav and I became closer, my admiration extended from the professional to the personal — to respect for his deep devotion to his siblings, to awe for his extraordinary knowledge of classical music. On our train ride through Central India, he had told me of his wish to write a musical biography of M.S. Subbulakshmi. Now, after working long hours in the health ministry on weekdays, he spent his Saturdays scouring old microfilms in the Nehru Memorial Museum and Library, documenting the concerts that M.S. had given in different places and at different times. When allowed a brief annual leave, he took research trips to London at his own expense, searching for materials in the British Library that were not available in India.

When Keshav retired from service, the M.S. project, germinating in his mind over many decades, finally found fruition in a book published by HarperCollins earlier this year under the title Of Gifted Voice: The Life and Art of M.S. Subbulakshmi. An impressive work of scholarship, it stands with Oliver Craske’s Indian Sun: The Life and Music of Ravi Shankar as one of the two best books on an Indian musician. In retirement, Keshav also co-edited a well-researched collection of essays on his professional interests, Healers or Predators? Healthcare Corruption in India, published by the Oxford University Press.

I admired Keshav for what he had done, and envied him for what he knew. We both liked to think of ourselves as ‘Nehruvian Indians’, as standing for the inclusive, culturally plural India that our first prime minister had fought for. However, Keshav was a Nehruvian Indian of a much deeper kind than I, with a far greater immersion in the cultural and linguistic richness of India. With his formidable knowledge of our music went a serious interest in our classical literatures as well. He spoke Telugu, Tamil, Hindi and English fluently, and knew some Sanskrit too. He could read all these languages easily, except for Telugu — indeed, at the time of his death he was learning the script of his mother tongue as part of his research for a book on the composer, Tyagaraja, which will now tragically lie unfinished.

Keshav Desiraju detested Hindutva. The Hinduism he himself understood and practised had a humanity and compassion and a philosophical depth, altogether incomprehensible to the self-appointed defenders of the faith who violently stalk the streets of India today. Keshav combined a deep understanding of India’s civilizational ethos with a sharp awareness of the disfiguring elements in our tradition. As a younger Indian who knew him wrote, “Keshav Desiraju was a true deshbhakt, a man in whom the high founding ideals of our Republic were actually made out in flesh and blood.”

Scholars can be solemn and humourless, bureaucrats pompous and self-regarding. This scholar-civil servant, however, had a sense of mischief and fun, as noted in Jo Chopra’s wonderful tribute in the The Indian Express. He has been gone merely a week, but there have already been half-a-dozen occasions when, reading something funny or farcical, I have thought, ‘I wish I could share this with Keshav.’ Keshav Desiraju was the first person I turned to for instruction on music, language, governance and public policy, and the first person I wished to pass on a joke or an interesting piece of gossip as well.

I have many cherished memories of my compatriot, of which the earliest may be the most characteristic. On that 1988 trip to Almora, the social workers, Asit Mitra, Lalit Pande, Keshav and I, went one Sunday to see a sacred grove around the Banari Devi temple. We travelled, at Keshav’s request, not in the DM’s lal-batti sarkari gadi but in Asit’s rickety jeep. It was a joyous excursion, the most powerful man in the district utterly content being incognito with his friends as we walked up a hill densely clad in oak to the shrine at the top.

Thirty years later, finding myself once more in Kumaon, I shared this story with Radha Bhatt, doyenne of the Gandhian movement in contemporary India. Radhabehn added a memory of her own. Whenever, as district magistrate of Almora, our friend found himself in Kausani, he would leave his driver at the foot of the hill atop which the Lakshmi Ashram lay and walk up alone to spend an hour or two with a person who knew the hills and its people better than anyone else alive. No DM before Keshav, and surely no DM after him, would have had the intelligence or humility to do anything remotely of this kind.

As I was drafting this piece, a scholar mentored by Keshav Desiraju sent me a news clip of people in Almora mourning his loss. It had been three decades since he had served in the district, yet he was still remembered with respect and affection. Indeed, through what he did in his different assignments at the level of the district, the state secretariat, and the Union government, Keshav may have touched more lives, and in more salutary ways, than any other civil servant of his generation.

Keshav Desiraju’s maternal grandfather was the philosopher, Sarvepalli Radhakrishnan, the second president of the Republic. Keshav carried his lineage lightly and that, too, was characteristic of the man. Many who knew him had no clue of whose grandson he was. Yet, in a strange but entirely happy coincidence, he died on the birth anniversary of his grandfather, September 5, also known as Teachers’ Day. Through his work and his conduct, Keshav taught all those who knew him how to live a more honourable life. And very often how to live a more interesting life too. He was the most exemplary Indian of my acquaintance — exemplary as public servant, scholar, teacher, family man, and friend.