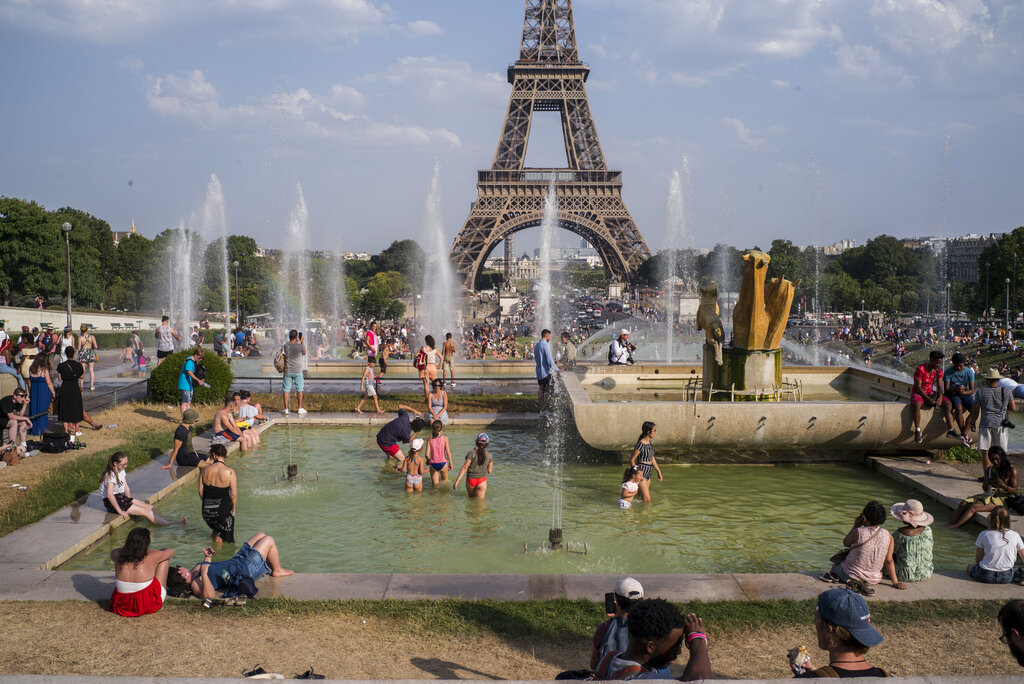 The city — it lends its name to the United Nations agreement on climate change — did experience its hottest day in history last week
AP photo
The Telegraph   |   Published 31.07.19, 12:20 PM

Sir — Paris might not be burning yet. But the city — it lends its name to the United Nations agreement on climate change — did experience its hottest day in history last week. In fact, the whole of Europe has been facing an abnormal heat wave, with the temperature crossing the 40-degree-Celsius mark in several places. Yet the heads of many multinational corporations in Europe continue to pretend that climate change does not exist, thus resisting any tweaks in company policy. The entire planet has to feel the heat because of the greed of a few.

Sir— The casual offer made by the president of the United States of America, Donald Trump, to meddle in the Kashmir issue is in no way welcome (“Houston, we have a Kashmir problem”, July 23). According to the Simla agreement, which has been the bedrock for peace between India and Pakistan till date, the Kashmir dispute can only be resolved through bilateral discussions.

It is true that in the past Pakistan has failed to respect the idea of peace which is intrinsic to the accord. But, whether for the change of guard at the helm, international pressure or the possible economic devastation in the country without external funding, Pakistan has recently begun opting for cooperation and cracking down on terrorist groups operating on its soil. There is now hope that a similar initiative regarding the Kashmir problem will help India and Pakistan resolve it peacefully.

At this critical juncture, when the tension is slowly thawing, any attempt of mediation by the US, even as a non-stakeholder, could aggravate the situation. It could undo whatever little progress had been made so far, and send the process into an indefinite limbo. The US does not know the pulse of the region and its politics as much as the leaders of the two countries concerned do. Instead of intervening directly, the US should join the rest of the world in pressurizing Pakistan to shun terrorism for good.

Sir — Donald Trump’s claim, in the presence of Pakistan’s prime minister, Imran Khan, that Narendra Modi had requested him to mediate in the Kashmir issue during their meeting in Osaka has given rise to a new diplomatic imbroglio. Even though the external affairs minister, S. Jaishankar, has denied this in both Houses of Parliament, reiterating India’s firm position that no third party would have any role in the matter, the Opposition has insisted that the prime minister himself make a statement.

Given that he was personally named by Trump, Modi should feel obliged to offer a clarification in person for the sake of transparency. The possibility of causing personal embarrassment to Trump should hardly be a deterrent, given that the US president is not exactly known for adhering to diplomatic conventions. If Modi chooses to remain silent, fearing a backlash from the US, it could hurt his own credibility.

Sir — The US is infamous for meddling in the affairs of other countries. Its interventions in Haiti and Iraq are only two examples. Any interference by the US in the Kashmir dispute is bound to make matters worse. One must not trust the political acumen of the current American president, Donald Trump, who is known for his eccentricity. Pakistan’s civilian government is known to be influenced by its anti-India military, and the current Indian government’s affinity for anti-Pakistan rhetoric is no secret either. But the two countries are still better equipped than Trump to resolve this issue.

Sir — The government plans to destroy about 54,000 mangrove trees for the Mumbai-Ahmedabad bullet train project. This poses a great threat to the environment. This summer, many parts of India suffered acute water scarcity and abnormally high temperatures. Rainfall has been erratic; some states have experienced flooding while others have had drought-like conditions. Development is necessary, but not at the cost of the environment.