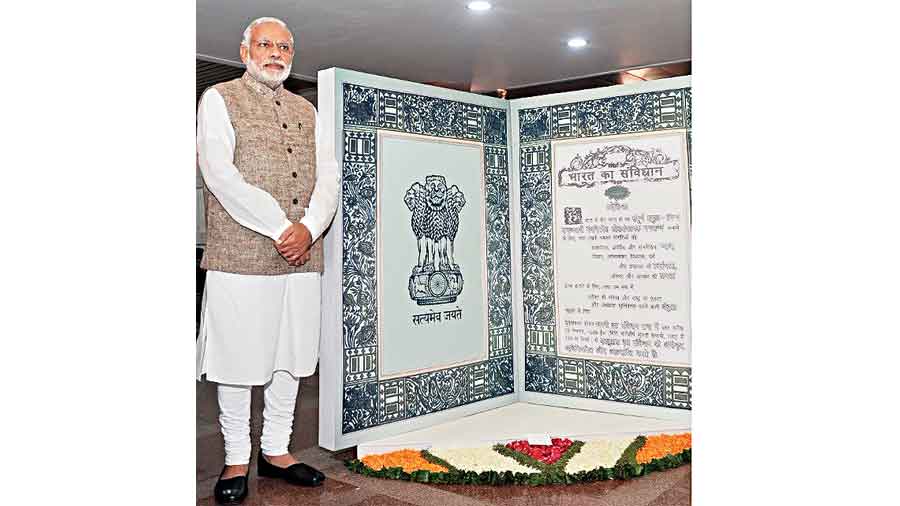 2020 has been a bad year for the health of Indians and for the health of Indian democracy too. The Modi-Shah regime, which is authoritarian by instinct and belief, has used the pandemic to further undermine the processes of constitutional democracy and strengthen its hold over State and society. In pursuit of its ambitions, the regime has launched a multi-pronged attack on the Indian Parliament, Indian federalism, the Indian press and Indian civil society organizations. Let us consider these in turn.

In the years he was chief minister of Gujarat, Narendra Modi displayed a consistent contempt for legislative procedure. A report compiled after he had been a decade in office showed that of all the chief ministers of Gujarat since the state’s formation, Modi convened the least assembly sittings. Months would pass in which the assembly would not meet; when it did, a day would be enough to dispose of matters at hand, with much time spent mourning members who had passed away. As is well known, apart from disregarding inputs from MLAs from the Opposition and even from his own party, Chief Minister Modi rarely consulted his own cabinet about major policy decisions.

Modi has carried this contempt for consultation with him to New Delhi. For him, Parliament is a place to make the odd stirring speech in, not a chamber for deliberative decision-making. The partisan attitude adopted by the Speaker of the Lok Sabha and the chairman of the Rajya Sabha is very much in line with their leader’s way of thinking. Their deputies act in the same way. Consider the manner in which the farm bills were ‘passed’ through the Rajya Sabha, with the deputy-chairman of the House, Harivansh, violating all the rules and norms of Parliament by refusing to allow actual voting, and making the bills into law on the basis of his own sense of the House. Of this departure from democratic practice, P.D.T. Achary, the former secretary-general of the Lok Sabha, wrote, “Parliament’s systems are designed to enable the opposition to have its say and the government to have its way. If the former is not possible, parliament as a democratic institution cannot survive for long.”

Those who are Modi bhakts, or who believe that the ends justify the means, have disregarded these violations and welcomed the bills as ‘historic’. On the other hand, supporters of the farm bills with more scruples and a deeper understanding of history have honourably alerted us to the awful consequences of such contempt for Parliament. Thus, as the senior lawyer, Arvind Datar, writes, “The enormous economic loss and the dislocation of normal life around Delhi could have been wholly avoided if the Bills had not been bulldozed through Parliament. The agitation teaches us the importance of following parliamentary procedure not just in letter but in spirit as well.” Union ministers may put the blame on urban Naxals, Khalistanis, and Opposition parties, but, as Datar points out, it is the “extraordinary haste with which the farm bills were pushed through both the Houses [that] has created the present crisis, which can only exacerbate the economic woes caused by the pandemic.”

More recently, the government cancelled the winter session of Parliament citing the pandemic, even as the Union home minister was addressing large political rallies in Assam and West Bengal.

As chief minister of Gujarat, Narendra Modi claimed to believe in ‘co-operative federalism’. As prime minister, he has sought to savagely curtail the rights and responsibilities of states. Again, the farm bill can serve as an example. As Harish Damodaran has pointed out, since the Constitution clearly places both ‘agriculture’ and ‘markets’ on the state list, on these matters “the Centre can encourage, incentivise, persuade and cajole states. However, it cannot legislate on its own.” Nonetheless, through a creative (mis)interpretation of an item in the concurrent list which covers trade and commerce in foodstuffs, the Centre had these bills passed, through the dubious procedure in Parliament described above, and without consulting the states at all.

The pandemic has witnessed a more general attack on the federal principle. The powers of the Centre have been strengthened through colonial-era laws and the National Disaster Management Act. Meanwhile, state governments run by Opposition parties have been undermined by bribing, cajoling, or intimidating legislators to switch their allegiance to the Bharatiya Janata Party. A true marker of how much the BJP cares for power and how little for the health of Indians was that the prime minister waited for the swearing-in of the new government in Madhya Pradesh before imposing a draconian lockdown at four hours’ notice.

In its attack on federalism, the BJP has particularly targeted two large states — West Bengal and Maharashtra. Here, governors more loyal to the ruling party at the Centre than to the Constitution and Central investigative agencies more loyal to their ministers than to the law have been used by the Modi-Shah regime to harass the non-BJP governments that currently rule these states. This intimidation has become so brazen that the BJP’s once loyal and long-term ally, the Shiv Sena, was compelled to state: “What if our Prime Minister is taking a special interest in destabilising State governments? The Prime Minister belongs to the country. The country stands as a federation. Even the states which do not have BJP governments, those states also talk about national interest. This feeling is being killed.”

In his years as chief minister of Gujarat, Narendra Modi was deeply distrustful of even the most non-political of civil society organizations. He has carried this distrust over to New Delhi. The year, 2020, had seen a tightening of the already extensive curbs on non-governmental organizations. The new amendment to the Foreign Contribution (Regulation) Act, argues one analyst, is designed to facilitate “arbitrary, vindictive action by the authorities”. By curbing and confining NGOs, the bill shall “have far-reaching consequences on the fields of education, health, people’s livelihoods, gender justice and indeed democracy in India”.

Narendra Modi has never much liked journalists who think for themselves, as his refusal to hold a press conference in six-and-a-half years as prime minister shows. The year, 2020, saw growing attacks on the independence of the press in India. In the first two months after the lockdown was imposed in late March, some 55 journalists faced FIRs, physical intimidation, and arrest. The highest number of attacks on journalists were in Uttar Pradesh, Jammu and Kashmir, and Himachal Pradesh, which are all ruled or controlled by the BJP. As a report by the Free Speech Collective noted, “The year 2020 has been a bad one for journalists in India… The killing and attacks on journalists have continued unabated. While self-censorship within the media remained an open secret, the government sought to increase regulation of the media, with media policies, funding and administrative mechanisms for online media.” India now occupies the 142nd place on the World Press Freedom Index, ranking well below Nepal, Afghanistan and Sri Lanka, though the fact that we are three places above Pakistan may provide some consolation to deshbhakts.

Apart from attacks on Parliament, federalism, civil society organizations and the press, 2020 had also seen a further stigmatization of India’s large and vulnerable Muslim minority. This stigmatization has been overseen by two of the most powerful politicians in India. The hand of the home minister, Amit Shah, is most visible in the BJP’s Bengal campaign and in the police’s partisan handling of the Delhi riots and their aftermath and the hand of UP’s chief minister, Yogi Adityanath, in the incarceration of a growing number of Muslim men on charges that are shady, flimsy, or non-existent. Notwithstanding the prime minister’s recent speech at the Aligarh Muslim University, it is clearly Adityanath’s majoritarianism that represents the deep, inner feelings of the party faithful, as manifest in the eagerness of other BJP chief ministers to enact the discriminatory laws and practices adopted in UP.

When the new laws regarding agriculture and labour were passed, there was a chorus of applause from free-market columnists crowing, “the crisis has not been wasted”. The chorus was credulous, because sustained economic growth requires both a level playing field and the rule of law. Neither does, or can, exist, in the Modi-Shah regime. Capitalists who contribute more to the secretive electoral bonds scheme shall get preferential treatment over those who don’t. Politicians who defect from other parties to the BJP miraculously have all corruption cases against them dropped. The police, the bureaucracy and even the courts allegedly act in the interests of their political masters rather than according to the law.

To hold the State and the private sector accountable, one needs the transparent gaze of a free press, informed debate in Parliament, and independent civil society organizations. With what transpired in 2020, we have even less of these than previously. Finally, one cannot have social harmony if the State and the ruling party treat those who are not Hindus as inferior to those who are.

For the prime minister and his party, political power, ideological control, and personal glory take precedence over the economic and social well-being of India’s citizens. They have, therefore, used, or rather abused, the crisis to weaken the institutions of Indian democracy and the traditions of Indian pluralism so as to further the construction of an authoritarian and majoritarian State, which they seek far more diligently than anything else.