India and its denotified tribes 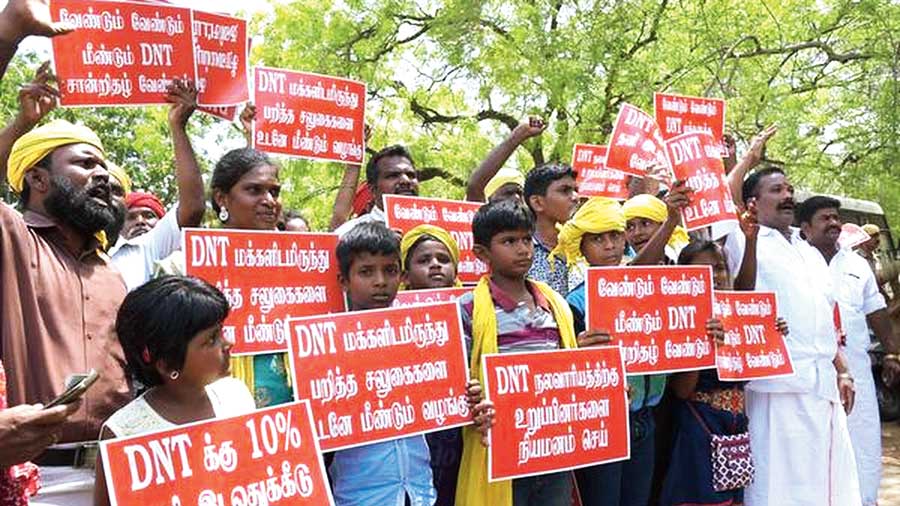 Sher Ali Afridi. The name may make no sense to us in 2020. I cannot say that Afridi is a forgotten name. It would be much better to say that he has always remained unknown. Ali Afridi was from that area of the erstwhile Punjab province, which is now in Pakistan. A Pakhtun and a former sepoy in the Khyber Agency, he lived a short life during high colonial times. He was arrested and transported to Andaman for serving his jail term. This was almost a quarter century before the construction of the Cellular Jail commenced in 1896, and a few years after the first batch of some 800 ‘expelled’ persons was packed off to what is now Port Blair. Afridi, a lover of freedom, had his flitting moment of glory when he succeeded in killing Lord Mayo.

Popularly known as Mayo in India, born in 1822 and educated at the Trinity College, Dublin, Richard Southwell Bourke, the Sixth Earl of Mayo, was posted to India in January 1869 as Viceroy. He is remembered for his work of improving relations between the Afghans and the British. In India, he is generally remembered for carrying out the first ever caste-based census. In February 1872, as the Viceroy was on a visit to Andaman, he was stabbed to death by Sher Ali. The reason? Barely 15 weeks before the murder, Mayo had given the green signal to the first Criminal Tribes Act of India, which turned a large number of innocent persons into criminals.

The work towards CTA-1871 had started several decades ago. William Sleeman (1788-1856) was appointed specifically to ‘crush organized gangs’ during the 1830s-40s. He did his industrious work by listing every group of armed persons and every armed clash. He listed them by their caste and community names. And, in the process, he floated an immensely popular idea that there were hordes of thugs freely roaming about in Central India. The Victorian imagination in England was ready to lap up the ‘thuggee’ story. Indians, in contrast, were completely unaware of Sleeman’s action and its potential for a long-term consequence. The most dramatic consequence was the formulation of the CTA around two decades later. The less dramatic, but far more destructive, consequence was that people in India accepted the idea that some sections of society are ‘naturally criminal’. One does not know if Ali Afridi had foreseen the forthcoming demonization of the communities branded by the CTA. Whether he did or did not, the tag of criminality has continued to stick to a large number of Indians, and for far too long.

One might tend to think that the communities that were brought under the purview of the CTA-1871 and all its subsequent revisions were, in a way, like all other classes, communities and groups victimized by colonial rule. That they certainly were; but their real tragedy began after colonial rule ended and India gained independence. During British rule, they were restricted from making frequent movements, from going out of the specific area within which they were restricted, or were confined to reformatory settlements and deprived of traditional livelihood and land ownership of any kind. However, when India gained independence, adopted the Constitution, and started preparing for its first general elections, the CTs were still inside their confinement areas and settlements. It was not until August 1952 that they were declared ‘free’. But this freedom came with a catch. Their reformatory settlements were thrown open after several generations had wasted themselves inside, carrying out the unpaid, compulsory labour for colonial civil construction projects, but they had nowhere to go. The life of any individual without land or livelihood is difficult enough; but if, in addition, the person has to carry a social stigma, it becomes far more unbearable. The CTs ‘denotified’ in 1952 had to face a wretched life. They became the non-persons drowned in the dung heap of scorn, contempt, atrocity and utter poverty. They had missed the relief bus as most states had already formed the lists of scheduled castes and scheduled tribes. The denotified tribes — DNTs — remained, in most cases, out of the safety net of social justice. So far, no systematic enumeration of all ‘denotified’ CTs has ever been carried out. But statistical projections on the basis of the 1871 and 1931 population census indicate that a close to accurate guess should place their present population at 14 crore. These people normally try to live without making themselves noticed in any conspicuous way. The stigma has not ceased to chase them. Over the last 25 years, ever since I started working with the DNTs of India, I have noticed that the single column, short-notice news items in district-level newspapers in regional languages about a person maimed to death, mob-lynched or picked up by the police and found dead in police custody often lead the trail, on close scrutiny, to a DNT, sacrificed at the altar of our imperviousness and ignorance about their existence. An eight-year-old Bakerwal girl raped and murdered somewhere in the foothills of the Himalayas; a Pardhi woman forced to undress herself in full view of a crowd and asked to drink someone’s urine in Maharashtra; a 50-year-old Bajania beaten to pulp on the mere suspicion of stealing a green gourd, to name just a few of the incidents, fail to rouse India’s conscience the way George Floyd’s breathlessness moved the entire world into protest and repentance.

Make no mistake: the majority among the migratory labourers, who walked hundreds of miles after the lockdown, many of them perishing on the way, were DNTs who had lived a migratory and nomadic life in the pre-colonial times. The Indian State — elite, upper class and sedentary people — failed to respond to the plight of the migratory labourers because we have fully internalized the colonial branding and stereotyping of the DNTs.

One would imagine that the DNTs return the society’s attitude of scorn with an equal degree of scorn, its emotional violence with a matching emotional violence. But that is a gross mistake. Recently, I was speaking to various groups of youngsters among the DNTs, and asked them how, next year, they would like to ‘celebrate’ the 150th year of their ‘notification’ by the CTA of Mayo in 1871. Their answer was, “by going to Cumbria — in North England — where a statue of Mayo has been standing in pride, and to offer roses as our expression of forgiveness. We would like to forgive them for what they did to us, for historical revenge is not good for civilized Indian people.” What a noble thought! I too would like to accompany them to Cumbria in 2021. I hope Indians who are busy settling historical scores with Mohammed Ghori and Babur have a moment to spare for the resolve of the DNTs.

The author is a cultural activist and founder of DNT Rights Action Group ganesh_devy@yahoo.com