Elected leaders must strive to resolve the problem of chronic hunger 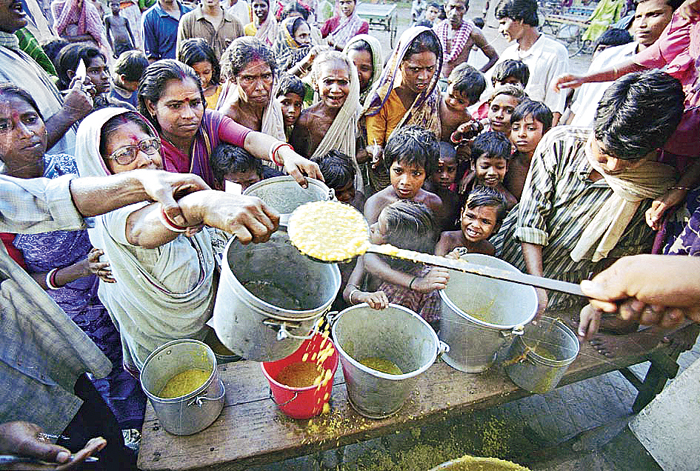 India continues to rank abysmally on the global hunger index
From The Telegraph archives
The Telegraph   |   Published 01.10.19, 06:40 PM

Recent research has shown that hunger has adverse effects not only on the body but also on the mind. It can lead to bad choices in the short-term as well as poor life decisions. Is it possible that successive governments in India have known this and used it to their advantage? Perhaps this is a bit far-fetched. But the fact remains that India continues to rank abysmally on the global hunger index. Elected leaders must strive to resolve the problem of chronic hunger. Otherwise, citizens will make the prudent choice of voting them out of power.

Sir — It was shocking to read about the two Dalit children who had to go relieve themselves on a road in Madhya Pradesh because they had no toilet at home, and were beaten to death by two upper-caste men. This happened while the Centre had been preparing to declare the country open defecation-free from today (“Defecating kids lynched”, Sept 26). The children belonged to a poor family that presumably could not afford to have a toilet constructed inside their house. The panchayat had allegedly sanctioned a house with a toilet for this family, but the sarpanch, a relative of the accused, had scuttled the proposal. Then who is really at fault here — the authorities or the children? Is it not the responsibility of the authorities to ensure that the poor have access to basic facilities?

This incident has also tarnished India’s reputation. Further, one of the accused reportedly declared that he had killed the children as, in his dreams, god had commanded him to kill “demons”. Superstition is also at the root of these monstrous acts. Urgent steps must be taken to educate people who are falling prey to blind faith.

Open defecation is an old habit, especially among those living in rural areas. I recently discovered that in Tamil Nadu, even well-off families in villages consider it unhygienic to have a toilet within the premises of the house, and prefer open grounds for defecation. Clearly, a lot more needs to be done to explain to the people the need to change this practice.

Sir — India can surely find place in a book of world records for being a country of extremes. It is home to some of the richest and the poorest of people in the world. It has the scientific knowledge and technical capabilities to send machines to the moon and to Mars. Yet, on the ground, children are lynched to death for defecating in the open because there are no toilets inside their house.

While some Indians are revered for their noble actions, others are busy stealing from all manner of public welfare funds, whether it is money set aside for mid-day meals for school students or fodder for cattle. Criminals roam around with security personnel, but children like Roshani Balmiki and Avinash Balmiki — they were just 12 and 10 years old respectively — are beaten to death.

In deep trouble: Attempts must be made to steadily maintain the geographical distribution of tigers
Shutterstock

Sir — In July, the prime minister had announced that according to a census report by the National Tiger Conservation Authority for 2018, the number of tigers in the wild in India had grown to 2,967. It marks a 33 per cent rise since the last count in 2014. Both the media and the common people celebrated this improvement. Last week, however, the conservation biologist, Raghunandan Singh Chundawat, questioned the obsession with the stated number as well as its credibility (“Whistle-blower slams numbers”, Sept 29).

In 2009, Chundawat had raised an alarm about the complete wipe out of the tiger population of the Panna Tiger Reserve in Madhya Pradesh. Even though he faced resistance initially, this alarm nudged the authorities into action, and the tiger population eventually rose from zero to 40. Chundawat’s suggestion of expanding the scope of the present conservation model, which only allots a protected area and prevents outside threats, should be given serious thought. Attempts must be made to steadily maintain the geographical distribution of tigers.