MEPs' visit to Kashmir: Modi's assault on the sovereignty of Parliament

While opening Kashmir’s doors to international evaluators, he has chosen to deny this right to Indian party leaders 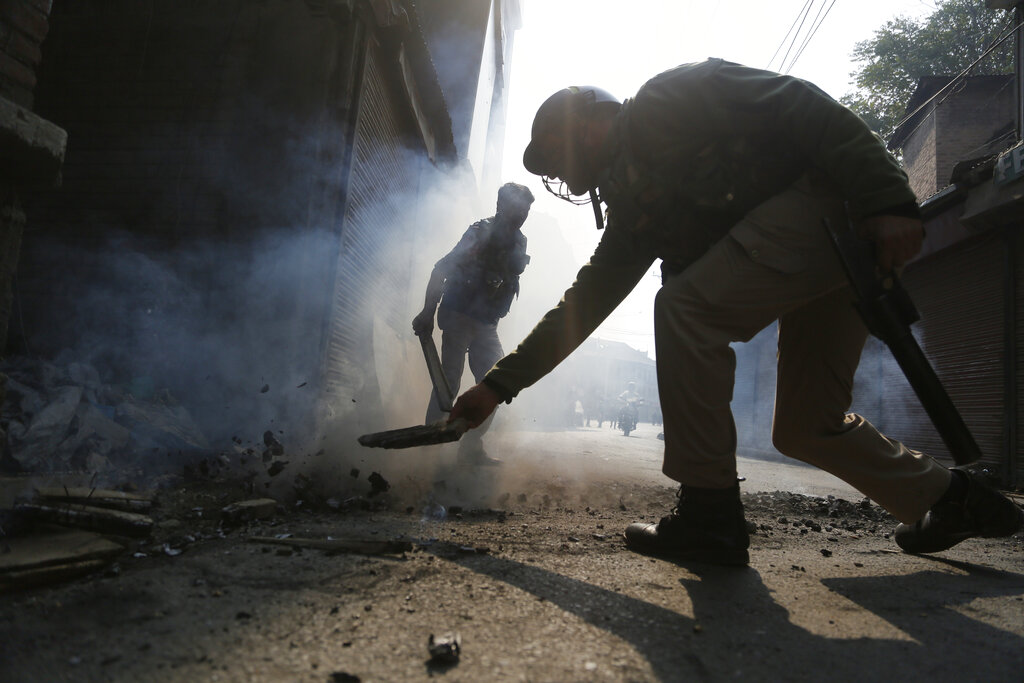 Policemen remove a burning tyre left by protesters as road block in Srinagar on Tuesday, October 29, 2019. A group of members of European Parliament members arrived in Kashmir on that day, the first foreign delegation to travel to the region since the abrogation of Article 370 on August 5, 2019
AP Photo
The Editorial Board   |   Published 30.10.19, 08:16 PM

The veneration of guests is an Indian tradition. But Narendra Modi and his government seem to have taken the mantra of atithi devo bhava a bit too much to heart. Over 20 members of the European Parliament — the bunch was carefully pruned to include mainly right-wingers — had been invited to Kashmir to assess the situation on the ground. The guests, evidently, have reciprocated the warmth of the hosts, parroting the Centre’s rhetoric in spite of the terror attack that took the lives of migrant labourers from Bengal. The issue, though, is not about such orchestrated harmony. The blatant double standards adopted by the Bharatiya Janata Party-led government as well as its convoluted strategy on a region as sensitive as Kashmir merits serious examination. By extending an invitation to an unofficial delegation of foreign dignitaries — a professed ‘international business broker’ was given precedence over the external affairs ministry in arranging the meeting — Mr Modi, it can be argued, has contradicted his assertion that developments in Kashmir are an internal matter only. If this was indeed the case, what was the need for an assessment from visitors from Europe? Opening up an internal matter to the scrutiny of lawmakers from the Continent could, in fact, strengthen the shrill voices demanding international arbitration on restive Kashmir. Could the BJP’s capitulation be attributed to the hostile international reactions to the prolonged lockdown in the Valley? After all, the human rights situation in Kashmir had made it to Congressional hearings in the United States of America. Moreover, a fair appraisal of the prevailing situation must include the people of Kashmir as a stakeholder in the dialogue. Interestingly, the invitation to a Liberal Democrat lawmaker was withdrawn when he insisted upon his right to engage freely in Kashmir.

What is unacceptable and shocking is that while opening Kashmir’s doors to international evaluators, Mr Modi has chosen to deny this fundamental right to leaders of Indian political parties. Should not this hypocrisy be seen as an assault on the sovereignty of Parliament, the repository of the will of a democratic people? This discrimination is, in fact, worthy of legal scrutiny. Each of these transgressions on the part of an elected government is indicative of an inertia in policy. This is only to be expected when narrow ideology begins to colour the strategic vision. The BJP is not being careful with its narrative on Kashmir. That could explain this public relations disaster.

Action needed against those who sponsor terror: PM Modi to EU MPs