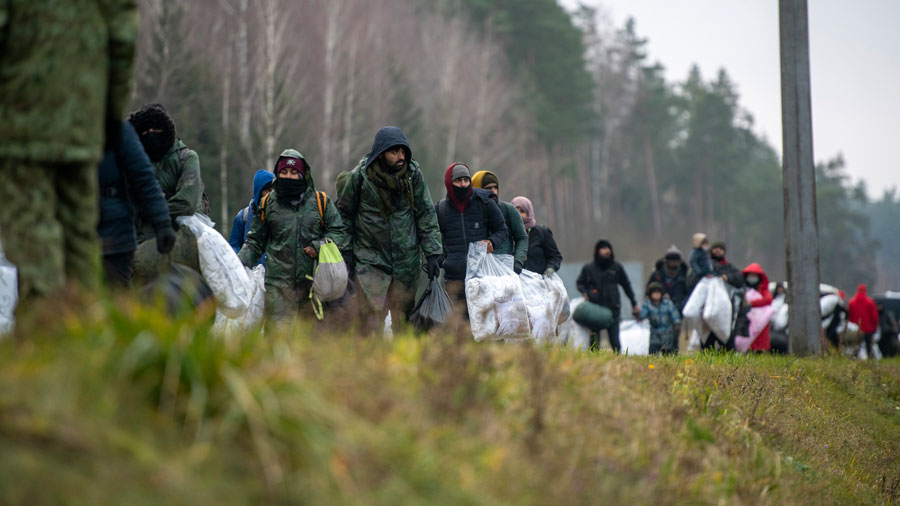 Migrants, some with newly distributed blankets, walk from the Polish border to a warehouse shelter on Thursday, Nov. 18, 2021 in Bruzgi, Belarus. The hastily constructed migrant encampments at the main border crossing into Poland from Belarus were cleared by the Belarusian government on Thursday morning, removing, for the moment, a major flashpoint that has raised tensions across Europe.
James Hill/The New York Times
The Editorial Board   |   Published 19.11.21, 12:52 AM

As thousands of migrants, mostly from the Middle East, struggle to survive in sub-zero temperatures along the Poland-Belarus border, the world is staring at a humanitarian crisis that is the result of cynical politics. Alexander Lukashenko, the strongman president of Belarus often described as Europe’s last dictator, is widely believed to have engineered the horrific situation along his country’s western border by flying in migrants as ‘tourists’ and then sending them to the Polish border to enter the European Union. Poland is forcibly preventing them from crossing the border, using water cannons and tear gas. After last year’s controversial election, where Mr Lukashenko claimed victory despite major irregularities, Brussels imposed strict sanctions against the Belarus president and his aides. By threatening the EU with a flood of migrants, Mr Lukashenko is believed to be hoping for sanctions relief. It is a dangerous game. For the moment, Brussels is warning of further sanctions and Poland has asked Nato to intervene.

Yet the EU cannot shirk its responsibility. It has repeatedly shown that it is willing to strike morally dubious deals to keep refugees out of the continent. Despite other tensions between the Turkish president, Recep Tayyip Erdogan, and the West, Brussels is paying Ankara billions of euros to host migrants otherwise headed for Europe. It similarly works with brutal Libyan militias, paying them to help stop African migrants from crossing the Mediterranean Sea. So it is not hard to comprehend why Mr Lukashenko might have decided that the ‘threat’ of migrants could spook the EU into offering concessions to him. And it is not just Europe. The world’s largest democracies are increasingly shunning international law and their own legacies as safe havens for refugees. The principle of non-refoulement in international refugee law bars nations from sending migrants back to countries where their lives might be in danger. But the United States of America is flying thousands of Haitian migrants back to the Caribbean country, where gang-led street violence is the norm at the moment. Meanwhile, the Indian government has been trying to send Rohingya refugees back to Myanmar, where the community is facing ethnic cleansing. The West is accusing Mr Lukashenko of weaponizing migrants. In that is an implicit admission: that to the EU, the women, men and children along the Poland-Belarus border are missiles aimed at the bloc, not humans first and foremost.