Disputed hot spots — Demchok, Depsang — will continue to fester as points of friction in Indo-China ties 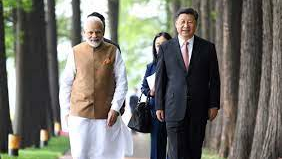 Beijing is turning out to be the proverbial ‘Voldemort’ in Narendra Modi’s book on strategic engagement. The Indian prime minister is yet to take China’s name explicitly even though as many as 13 rounds of military-level talks have taken place to resolve the border dispute between New Delhi and Beijing. The semantics employed by both sides at the end of the last engagement were illuminating. The Indian army stated that ‘constructive suggestions’ had been put forward to diffuse the situation but that China had not been too ‘agreeable’ on its part. China responded by accusing India of harbouring ‘unreasonable’ expectations. The war of words indicates a hardening of position by the two rivals and that there is unlikely to be a resolution anytime soon. This, in turn, implies that the disputed hot spots — Demchok, Depsang — would continue to fester as points of friction in Indo-China ties. Worse, given the deadlock, Indian army’s jawans and commanders would have to brace themselves to be vigilant in an inhospitable terrain during a harsh winter.

China, evidently, is in no hurry to end the crisis. The communist party has taken a decisively nationalistic — jingoistic — turn under the leadership of Xi Jinping. Keeping the border with India heated would be a good opportunity for an aggressive Beijing to flex its muscles occasionally. The onus, clearly, is on India to find a way out of the crisis. Even though New Delhi should continue to deploy its resources to ensure that no more territory is lost, military adventurism has to be ruled out as a strategic intervention in the light of the worrying possibility of a two-front threat. India must, therefore, rely on its tried-and-tested diplomatic mettle. It would be prudent for India’s prime minister to concede the scale of the threat; a public admission of territorial loss from the occupant of India’s highest electoral office could well render greater manoeuvrability to New Delhi’s diplomatic outreach. This is especially critical at a time when international alliances are being formed with an eye on the gathering storm in the region. What remains to be seen is whether Mr Modi has the acumen and the courage to bite the proverbial bullet.