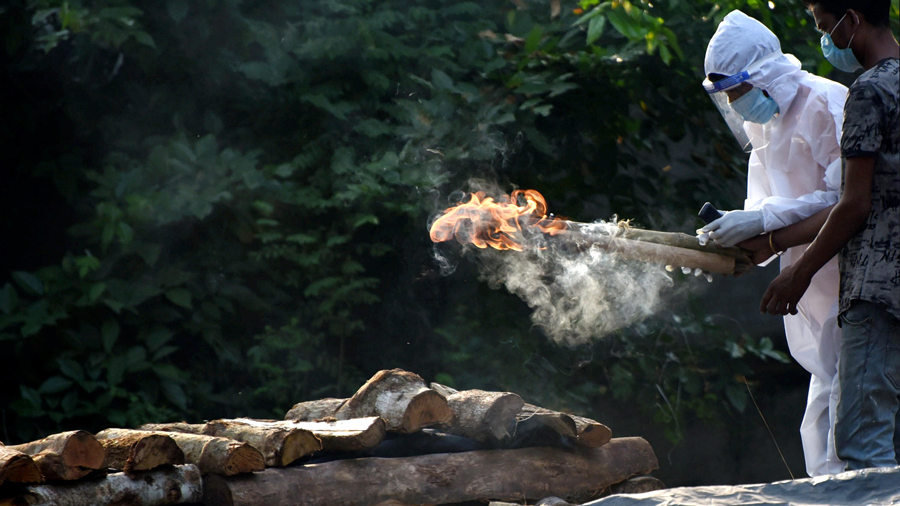 India is in the global news because of the ubiquitous visuals of burning pyres of the victims of Covid-19. To conceal the extent of the crisis, this authoritative government and its institutions are exploring every possible avenue to make invisible the vignettes of overwhelmed hospitals, suffering and death. Can the smoke from the funeral pyres be kept away from the public gaze? Can the unreported deaths be obliterated from the memory of the surviving family members?

The history of famines, wars, riots, epidemics and diseases is not unknown to us. The last famine in British India — the great Bengal famine of 1943 — had an ‘official’ death count ranging from 1,000 to 38,000 per week at its peak depending upon the choice of the source and the methodology. The Famine Inquiry Commission’s somewhat arbitrary number of famine and epidemic related mortality toll was about 1.5 million. Even though the famine subsided, the search for the causes and precise estimates of deaths had not. Soon after the famine, a rigorous academic debate followed. In February 1944, the department of Anthropology, University of Calcutta, brought out sample-survey-based mortality statistics covering the period around the peak of the famine in June-December 1943. The Famine Inquiry Commission had concluded that a serious shortage of food, especially rice, was the primary cause of the famine; it took decades for this dominant ‘official’ view to be disproved by Amartya Sen in the 1970s. Sen’s widely accepted estimate was 3.048 million deaths in the Bengal famine. The Famine Inquiry Commission not only misinterpreted the causes of the famine but also underestimated its death toll by 1.5 million. The British could not escape from public scrutiny; can the Narendra Modi government’s lapses in the management of the pandemic be erased from history?

Such endeavours of finding the truth did not necessarily come from the government presiding over a crisis. The academia, the press, archives, surveys and the writings of authors who had lived through these events proved to be invaluable sources. Political control over data collection and sharing might favour the incumbent government for the time being but it cannot absolve its complicity from annals. For instance, censorship during the Spanish Flu could not quite hide the skeletons in the closet.

Not just credible epidemiological and public health studies that are being used to create advance models to predict Covid infections and deaths but also unconventional sources, such as records from crematoriums, graveyards as well as obituary pages in newspapers would serve as critical sources to gauge Covid’s decimation in cities and towns. The accuracy of the data can be debated. But can the government stop the truth from coming out in the future? Even a population census would enumerate the number of Covid deaths and their patterns across states, caste, class, occupation, gender, age and so on.

It is impossible to obliterate the truth from history. The results of the assembly elections in West Bengal, Kerala, Tamil Nadu as well as the outcome of the panchayat polls in Uttar Pradesh suggest that citizens are registering their resentment against the Modi government in New Delhi. This government will not be able to save its face from history.