Adequate resources must be allocated for climate-resilient housing, rehabilitation, education, and jobs 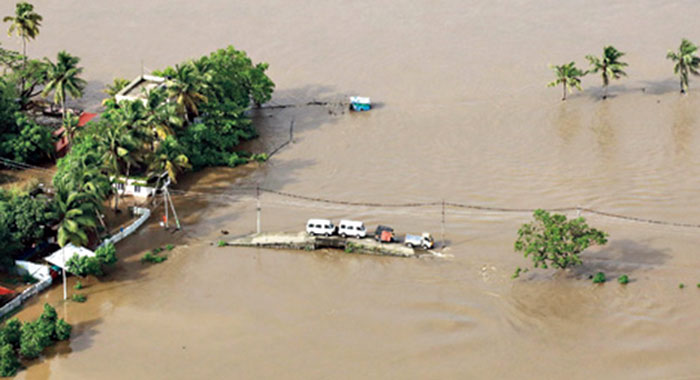 A flooded stretch in Kochi, Kerala, in August 2018. Some 36 million Indians are expected to face annual flooding by 2050. Climate refugees are not recognized under most international laws, thus rendering them ineligible for protection under many global legal frameworks.
Telegraph file picture
The Editorial Board   |   Calcutta   |   Published 04.11.19, 04:31 AM

Underestimating the depth of a problem can spell disaster when it comes to finding a solution. This misreading of a potential calamity is what seems to have happened if the findings of a study on rising sea levels are anything to go by. According to the study, conducted by Climate Central, a research group based in the United States of America, 36 million Indians are expected to face annual flooding by 2050 — a projection that is a seven-fold increase from the previous estimate of five million. There are many serious problems that arise out of such under-reporting of figures, not least of which is the manner in which it affects both mass awareness and government policy. It is no laughing matter if policymakers and citizens are blindsided by new information indicating that the scale of the climate crisis is far bigger than they had imagined. The shaping of effective policy is dependent upon the credibility of the figures on which it is based. Is there then a case to consider certain means of regulating studies on climate-related matters? This would ensure accountability without encroaching upon the modalities of the research.

Given the extent to which the calamity has progressed — low-lying cities such as Calcutta are particularly at risk — Climate Central’s chief scientist clarified that even if there were to be a sharp drop in greenhouse gas emissions, it would have little impact on rising sea levels in the next few decades. In the light of this, it would not be unreasonable to assume that the problem cannot be entirely prevented. Solutions thus must work around the crisis. One way to do this is to focus on climate-resilient housing and architecture, both along the coastlines and in the cities. However, given that such specialized designing requires ample funding in order to be affordable for the millions projected to be displaced by floods, it is crucial to develop international linkages of financing. This, in turn, will determine how successful local efforts are in managing the impending crises of flooding and displacement. Moreover, special attention must be paid to the question of the rights of displaced populations. Climate refugees are not recognized under most international laws — this includes the 1951 Refugee Convention and the 1967 Protocol Relating to the Status of Refugees — thus rendering them ineligible for protection under many global legal frameworks. As such, the basic claims of vulnerable constituencies — rehabilitation, education, jobs — must be a major factor in climate crisis management. Unless this happens, the emergency will deepen along with the waters.

Politicians need to focus on climate change, not on grabbing power

Tackling volatility in the supply of water