Catalonia: The conflict within 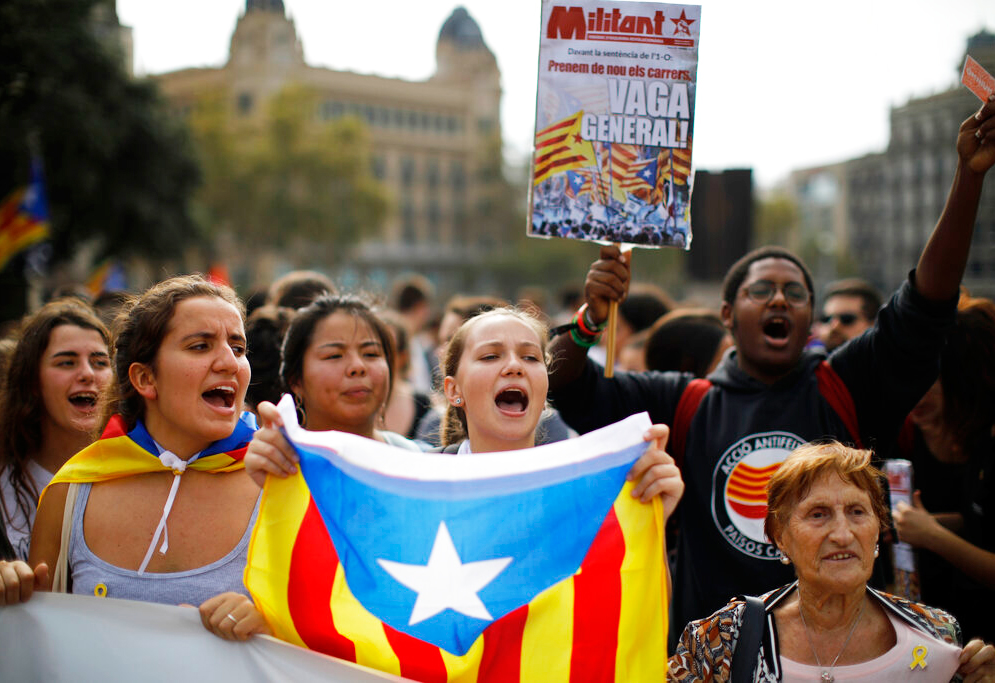 The demonstrations, some of them violent, are still going on in Catalonia, weeks after Spain’s Supreme Court sentenced nine separatist leaders to between nine and 13 years in prison for sedition. This was the last thing Spain’s prime minister, Pedro Sánchez, needed two weeks before a national election in which his Socialist Party was already losing ground to right-wing nationalist parties.

Catalan separatists are convinced that the evil Spanish State as a whole is conspiring to crush their movement, but the court had little choice because the leaders deliberately broke the law. They held an illegal independence referendum two years ago in which few people except the separatists voted, and used that ‘victory’ to proclaim independence.

Opinion polls always show that a majority of people in Catalonia don’t want independence, but 92 per cent of those who participated in the referendum voted for it. It was cynical manipulation which exploited the fact that the anti-separatist parties in Catalonia all told their supporters not to vote. The bid for independence failed when Madrid dissolved the regional parliament and removed the separatists from office. In the subsequent provincial election in December 2017, the pro-independence parties got 47.7 per cent of the vote, so the separatists would probably have lost a real referendum by the same margin.

The real problem for the separatists is that about half the people in Catalonia are Spanish-speakers who have no interest whatever in seceding from Spain. Some are relatively recent arrivals, but most were born in Catalonia, the offspring of migrants from other parts of Spain who were drawn by the booming economy. How can ethnic Catalans achieve their goal in a democratic way, though, when half the voters by definition are not interested in it? The only way is somehow to define Spanish-speakers as not really full citizens of Catalonia, and though they never say that in so many words that was their unspoken justification for the manipulation they practised in the 2017 ‘referendum’.

Josep Borrell, Spain’s foreign minister but himself a Catalan, recently offered a lethal analysis of this attitude: “[T]he root of the problem is that the independence movement denies the ‘Catalanness’ of those people who aren’t in favour of independence. When you... claim that only those who think like you are ‘the people’, that’s a totalitarian attitude.” On the other hand, you cannot fail to feel some sympathy for the Catalan nationalists, for as recently as 1950 the great majority of the region’s residents were Catalan-speakers. You also cannot ignore the history: Catalans are not oppressed now, but the only language used in the schools and in all official communications in Catalonia under the Franco dictatorship, right down to the 1980s, was Spanish.

None of this has been forgotten by Catalans, who at one time even feared that their language might be lost. An independent Catalonia might have restricted the arrival of so many Spanish-speakers if such an entity had existed 75 years ago, but it’s too late now. Those Catalans who respect democracy but want independence therefore face an insoluble problem, and it’s only Spain’s refusal to permit a real referendum that spares them from having to face up to the conflict between these two values. But the Spanish Constitution talks of the ‘indissoluble unity of the Spanish nation’ and does not permit any region to hold a referendum on independence. This is hardly surprising in a country that has had four civil wars in the past two centuries, but it effectively guarantees that the unrest in Catalonia will continue indefinitely.

So far it has been almost entirely non-violent, but the traditional pro-independence civil society groups, the Catalan National Assembly and Omnium Cultural, are now being outflanked by Tsunami Democratic, a more combative and secretive group. They are almost all young; they are at home with apps and social media, and they are up for a fight, but Catalonia is still a pretty peaceful place. Long may it remain so.