Anti-Semitic hate speech, harassment and fear of being recognized as Jews are becoming the new normal 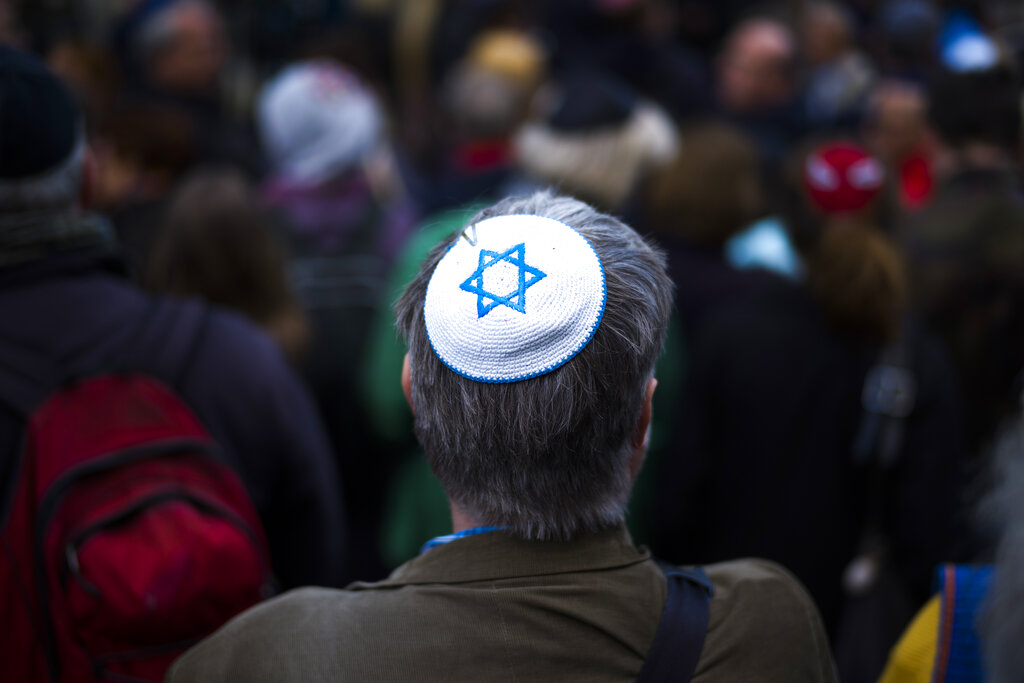 In this April 25, 2018 file photo, a man wears Jewish skullcap, as he attends a demonstration against an anti-Semitic attack in Berlin. Far-right and far-left politicians have often learned to project themselves as defenders of Jews while drawing on blatantly anti-Semitic tropes
AP Photo
New York Times News Service   |     |   Published 27.05.19, 01:45 PM

For years, Europe maintained the comforting notion that it was earnestly confronting anti-Semitism after the horrors of the Holocaust. It now faces the alarming reality that anti-Semitism is sharply on the rise, often from the sadly familiar direction of the far right, but also from Islamists and the far left.

The worrisome trend was underscored by a report issued by the German government this month showing that anti-Semitic incidents in Germany had increased almost 20% in 2018 from the previous year, to 1,799, with 69 classified as acts of violence. The most common offense was the use of the swastika and other illegal symbols; the rest ranged from online incitement and insults to arson, assault and murder.

Of the total, the report attributed 89% of the incidents to the far right. Germany, like many other European nations, has seen a resurgence of a neo-fascist right, but much of the recent reporting in Germany on the rise of anti-Semitism has focused on hostility to Jews among Muslim migrants. A European Union survey conducted in 2018 likewise found that among German Jews who had experienced anti-Semitic harassment over the past five years, 41% perceived the perpetrators of the most serious incidents to be “someone with a Muslim extremist view.”

Whatever the reasons for the discrepancy, the message from the German government is that anti-Semitism is not largely an imported problem, as far-right groups often maintain — as justification also for their Islamophobia.

That the rise in incidents was in Germany made the government report all the more concerning. But anti-Semitism is on the rise all across Europe, as well as in the United States. France reported an increase of 74% in anti-Semitic acts in a single year, with 541 incidents reported in 2018, including widely viewed videotaped insults shouted at the French Jewish intellectual Alain Finkielkraut during one of the yellow vest protests. In Britain, nine Labour members of Parliament quit their party in part over the cloud of anti-Semitism hanging over the party leader, Jeremy Corbyn.

In the United States, attacks on synagogues by white-supremacist gunmen have led the growing list of assaults on Jews. The Anti-Defamation League reported that these attacks more than doubled from 2017 to 2018, to 39, part of a total of 1,879 anti-Semitic incidents. There has also been a marked rise in the political weaponization of anti-Semitism by both left and right, often played out in debates on criticizing or supporting Israel. Prime Minister Benjamin Netanyahu has not helped matters by finding common cause with nationalist leaders like the Hungarian prime minister, Viktor Orban, or President Donald Trump — so long as they do not support a Palestinian state.

A tally of incidents does not tell the full story. To a degree, the numbers reflect the way hate speech, intolerance, anger and once-taboo themes have found their way into the open on social media or via populist movements, allowing hatred of Jews to come out of the shadows. But far-right and far-left politicians have often learned to project themselves as defenders of Jews while drawing on blatantly anti-Semitic tropes, as Orban has done in Hungary. Among the Muslims of Europe, and among some leftists, a resentment of Israel often crosses into hostility to all Jews.

What is clear is that these strains of anti-Semitism — from the right, from the left and from radical Muslims — have morphed into a resurgence of a blight that should have been eradicated long ago, and that is causing serious anxiety among Europe’s Jews.

A CNN poll in November on the state of anti-Semitism in Europe found that a third of respondents said they knew little or nothing about the Holocaust. Nearly a quarter said Jews had too much influence in conflict and wars; more than a quarter said they believed that Jews had too much influence in business and finance. A 2015 survey by the Anti-Defamation League found that 51% of Germans believed it was “probably true” that “Jews still talk too much about what happened to them in the Holocaust.” These are the stereotypes that make anti-Semitism an especially pernicious form of bigotry, a grand conspiracy theory in which Jews spread evil in their countries through some illusory subterfuge, whether controlling capital, or the media, or whatever.

All this is not news to European Jews, who for some time have been feeling less and less safe and welcome in their home countries. After polling more than 16,000 Jews in 12 European countries at the end of last year, the EU’s Agency for Fundamental Rights concluded that anti-Semitic hate speech, harassment and fear of being recognized as Jews were becoming the new normal. Some 85% of the respondents thought anti-Semitism was the biggest social and political problem in their countries; almost a third said they avoided Jewish events or sites because of safety concerns. More than a third said they had considered emigrating in the five years preceding the survey.

As appalling as these statistics should be to every European, they should also ring a loud alarm for every American leader of conscience. Speak up, now, when you glimpse evidence of anti-Semitism, particularly within your own ranks, or risk enabling the spread of this deadly virus.