Sadhana Mishra, a social development officer with a tribal school here, on Friday became the first in the state to obtain a passport under transgender category. 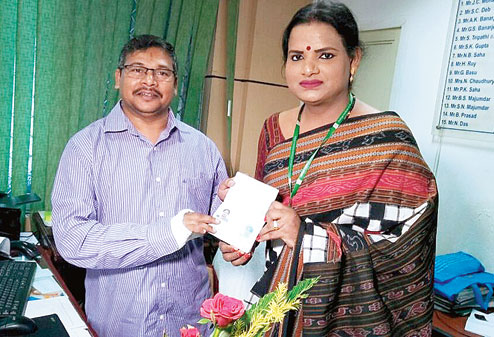 Bhubaneswar: Sadhana Mishra, a social development officer with a tribal school here, on Friday became the first in the state to obtain a passport under transgender category.

An official at the Regional Passport Office said even a couple of years ago transgenders had their passports marked as male in the sex identifier column.

Regional passport officer Bhubaneswar Digbijoy Giri said Mishra's passport was the first in the state with a 'T' written in the sex column.

"Sadhana had applied for a passport seven days ago and it was sent to the applicant's postal address. Sadhana had come to my office to meet me after getting the passport," said Giri.

On April 15, 2014, the Supreme Court of India had ordered recognising transgenders as third gender. The court had also asked the government to ensure that transgenders got job quotas and facilities including voter card, passport and driving licence. Following the order, many government documents such as ration card, voter identity cards, passports and bank forms had started providing "TG"(third gender), "Other" or "T" (transgender) as sex identifiers.

Sadhana, 34, was overjoyed on getting the passport and said this would help bring an end to the difficulties faced by transgenders during security check at airports.

"While we are dressed like women, the sex column in the passport used to be male for which we had to face difficulties at airports. But with the government giving us due recognition, we are hopeful of getting proper treatment at the airports," said Sadhana.

Haling from Keonjhar, Sadhana holds a masters degree in social science and business administration. She has also worked in the field of gender discrimination, woman empowerment and for underprivileged children.

"Previously, I had a passport with male written in my sex column. I surrendered the passport as the government had recognised the third gender. I am happy that I have obtained a passport under transgender category," she said.