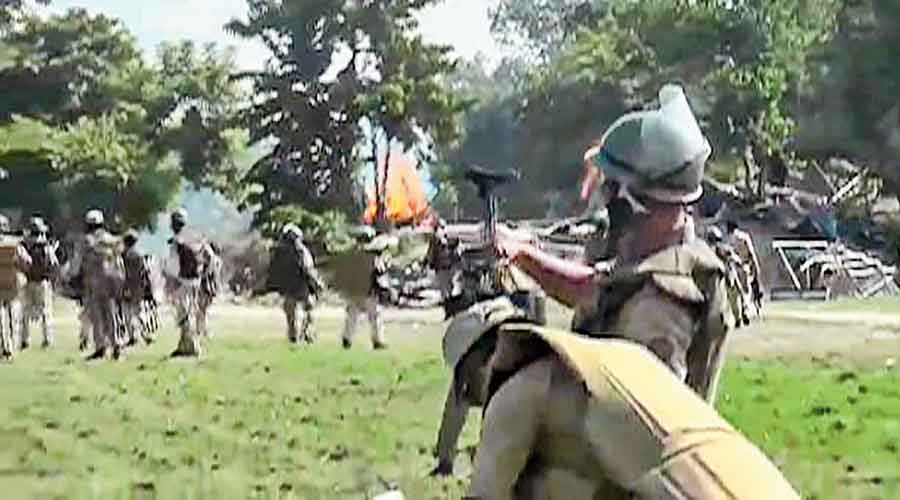 At least two people were killed in police firing in Assam’s Darrang on Thursday during an operation to evict alleged encroachers in a minority-dominated settlement.

A macabre element was injected when purported footage from the locality showed a photographer hired by the district administration stomping on and punching a wounded man moments before he became motionless.

The video, the content of which had not been disputed till late on Thursday night, showed uniformed personnel opening fire repeatedly and in quick succession.

The man, wielding what looks like a stick and chasing the police, runs into a posse of uniformed men. Shots ring out, the man slumps, many uniformed men close in on him and rain blows with batons.

When the police disperse, the man can be seen lying on the ground. The photographer, who is at the centre of the posse, turns back, jumps and appears to land on the left side of the man, who throws up or flails his left arm momentarily. A policeman lands another lathi blow on the man.

The photographer then appears to knee the man near his face and starts walking, only to turn around and slam his fist into the man. The video camera zooms in on the motionless man, on whose vest a red stain can be seen spreading from his chest.

Bijay Shankar Baniya, a professional photographer hired by the district administration to document the situa¬tion, was arrested later.

Darrang superintendent of police Sushanta Biswa Sarma, younger brother of chief minister Himanta Biswa Sarma, said the protesters, armed with sharp weapons, had pelted the police and others with stones.

The police said they had initially fired in the air to disperse the protesters but failed, thereby being forced to fire at the crowd, killing two and injuring at least 10.

Around 10 others, including policemen, too were injured in the clashes.

The dead have been identified as Saddam Hussain and Sheikh Forid.

The injured include eight policemen. Assistant subinspector Moniruddin has been admitted to the Gauhati Medical College Hospital in a critical condition.

The eviction operation is part of the BJP government’s move to free 77,000 bighas from encroachers at Sipajhar in Darrang district on the northern banks of the Brahmaputra and set up an agriculture project involving youths from the indigenous communities.

The residents, who claim they have been living there since the 1970s, were served notices on Saturday and the ongoing drive was launched on Monday, freeing 4,500 bighas from about 800 families. Four places of worship were also demolished, the residents said.

The eviction, along with the allotment of the freed land to the landless among the indigenous communities, was one of the key poll planks of the BJPled alliance. Chief minister Sarma had visited the affected area in June and promised to evict the “encroachers” and set up the agriculture project.

There was no resistance on Monday but on Thursday, the affected people demanded rehabilitation and adequate time to move out because of the ongoing pandemic, sources said.

The Assam government has ordered a probe by a retired judge into the police firing.

Chief minister Sarma said the eviction drive would not stop. “The police have been entrusted with the responsibility of clearing the land from encroachers and they will continue to do it till the job is done. Eviction will stop once it is dark and resume tomorrow,” he said on Thursday evening.