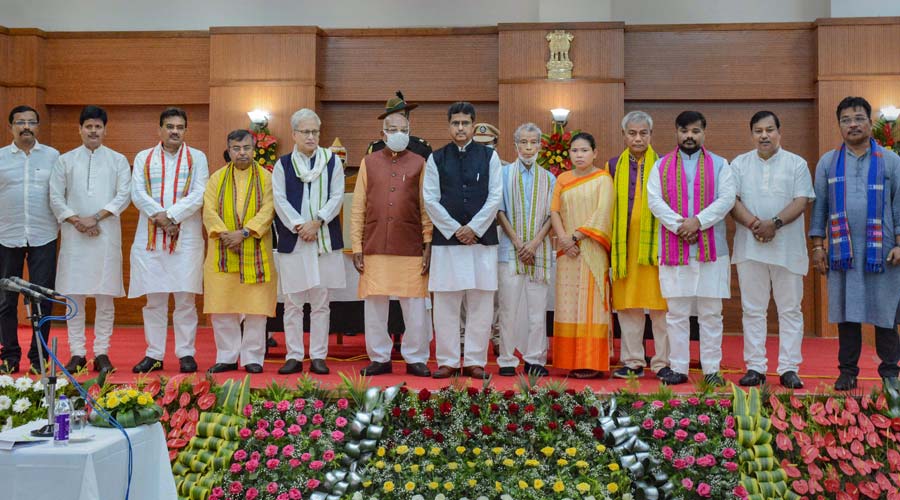 Tripura CM Manik Saha with his Cabinet ministers in a group photograph after their oath taking ceremony, in Agartala on Monday.
PTI Photo
Our Bureau, PTI   |   Agartala   |   Published 16.05.22, 03:21 PM

Eleven MLAs -- nine from the ruling BJP and two of the IPFT were on Monday sworn in as cabinet ministers of the new Manik Saha-led government in Tripura.

Governor S N Arya administered the oath of office and secrecy to the newly inducted ministers of the BJP-IPFT coalition government at Raj Bhavan here.

Government sources said the portfolios of the cabinet ministers would be announced later.

Of the 11 ministers, Ram Pada Jamatia of the BJP and Prem Kumar Reang (IPFT) were the only ones who did not figure in the Biplab Kumar Deb-led cabinet.

Mever Kumar Jamatia of the IPFT was dropped from the Saha-led cabinet.

The new cabinet would pursue the "unfulfilled dreams of former CM Biplab Kumar Deb", said Sushanta Chowdhury, shortly after he was sworn in as a cabinet minister.

"Everything is moving in right direction there was just a three-day gap in between. We hope to resume work with new zeal and enthusiasm," he told reporters.

Chowdhury, who was the information and cultural Affairs (ICA) minister of the previous cabinet, said almost all ministers who have taken oath are old-timers.

Only two new faces have been inducted into the cabinet as they were found capable for the job, he added.