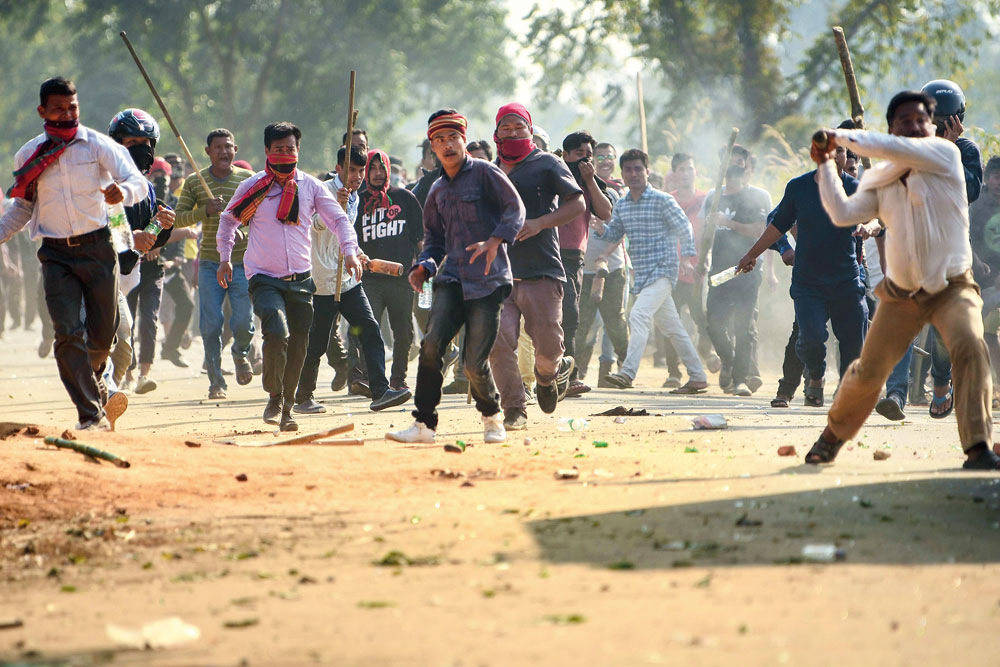 Activists clash with police at Madhav Bari in Tripura on Tuesday during a protest against the passage of the citizenship bill.
(PTI)
Tanmoy Chakraborty   |   Agartala   |   Published 09.01.19, 06:47 PM

The Twipra Students Federation (TSF) demanded the resignation of chief minister Biplab Kumar Deb after Tripura police lodged an FIR against three of its members on Wednesday.

The FIR was lodged under the Arms Act in connection with Tuesday’s road blockade put up by the TSF at Madhav Bari in Jirania in West Tripura district, 15km from here, against the Citizenship (Amendment) Bill, 2019.

TSF general secretary Sunil Debbarma said, “We were supporting the bandh called by the North East Students Organization (Neso). We put up a blockade on National Highway 8 and our plan was to withdraw it peacefully but the police and TSR opened fire on us without any reason. The government is responsible for the incident and we demand the resignation of the chief minister.”

Tripura West superintendent of police Ajit Pratap Singh told The Telegraph, “The situation has returned to normal. A huge contingent of police, Tripura State Rifles (TSR) and the Assam Rifles is patrolling Madhav Bari and the adjacent areas. Section 144 of the CRPC was promulgated in the area for an indefinite period on Tuesday.”

“We have registered an FIR against three TSF leaders, Bishu Debbarma, Upendra Debbarma and Sunil Debbarma, under Sections 307, 144 and 149 of the IPC for carrying arms during the protest. No one has been arrested yet. Investigations are on,” he added.

Singh said a countrymade gun and a machete were recovered during a search operation on Wednesday morning.

Sulakkhana Mitra of the Trauma Care Centre at GB Pant Hospital said one of the injured, Sumit Debbarma, who received bullet injury on his back, had been shifted to Calcutta for treatment after his condition deteriorated.

“Six patients, including a TSR jawan, were admitted at GB Pant Hospital on Tuesday. The five civilians received bullet injuries. The condition of one of the patients, Sumit Debbarma, is critical. We referred him to Calcutta this morning. The rest are stable,” Mitra said.

Apart from Sumit, the other four TSF activists injured in the firing have been identified as Lalit Mohan Debbarma, Sankar Debbarma, Pohar Debbarma and Rabi Debbarma. The police and Tripura State Rifles had opened fire in the air on Tuesday to disperse protesters. The TSF jawan has been identified as Dinesh Kumar. He was injured during pelting of stones and bottles at the security personnel by the protesters.

IPFT general secretary Mangal Debbarma said they would continue their protest against the bill. “We will soon declare our next course of movement. We don’t want illegal migrants to settle here,” he said.

INPT general secretary Jagadish Debbarma said they would intensify their protest. “The bill will encourage illegal migration in Tripura. It cannot be allowed. Soon we will decide our next course action,” he said.